Victorian Premiers Literary Awards 2010: the results are in

Posted on September 29, 2010 by Andrew Nette| Leave a comment 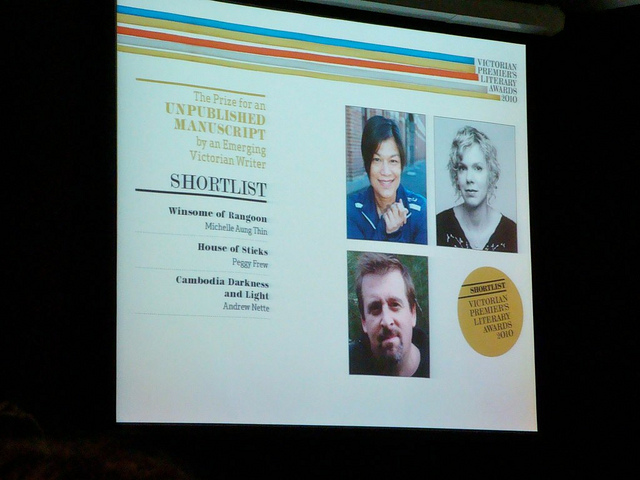 The results are in for the Victoria Premier’s Literary Awards.

After being shortlisted in the category of Unpublished Manuscript by an Emerging Victorian Writer, my manuscript Cambodia Darkness and Light unfortunately didn’t get the gong. That honour went to Peggy Frew for her work, House of Sticks.

But in a surprise announcement, Michelle Aung Thin, the other shortlisted writer in the unpublished manuscript category and myself, walked away with Unpublished Manuscript Fellowships. These include a financial stipend and a workspace at the Wheeler Centre. Supported by the Wheeler Centre and the Readings Foundation, these fellowships are new addition to the awards and I’m thrilled to have received one.

Thanks to Mark Rubbo for sponsoring the fellowships and to the Wheeler Centre for putting more flesh on the bones of the competition’s long-standing commitment to emerging writers.

And while I am at it, congrats are also in order for Peter Temple who took out the Vance Palmer Prize for Fiction for Truth. It’s not every day genre fiction wins major awards and that’s two strikes Temple’s racked up. Hopefully, his success will further cement the status of crime writing in Australian literature.

The awards ceremony itself was a blast. The crowd, most of whom were live tweeting the proceedings, was great. I particularly enjoyed meeting Lisa Dempster, Program Manager for the Emerging  Writer’s Festival and Angela Meyer, whose blog Literary Minded has a great wrap of the proceedings. It’s not every day my partner Angela Savage and I get tagged as night’s cutest couple, and in glorious sepia tones no less.

As to where it all goes from here with my manuscript, hopefully it’s a few more steps towards eventual publication.

That’s why it’s great to now be in the very capable hands of Benython Oldfield of Zeitgeist Media Group. Yes, I have an agent. I’m really looking forward to working with Benython, whose agency represents a wide range of writers whose work has an Asian theme, including a number of authors from the region.