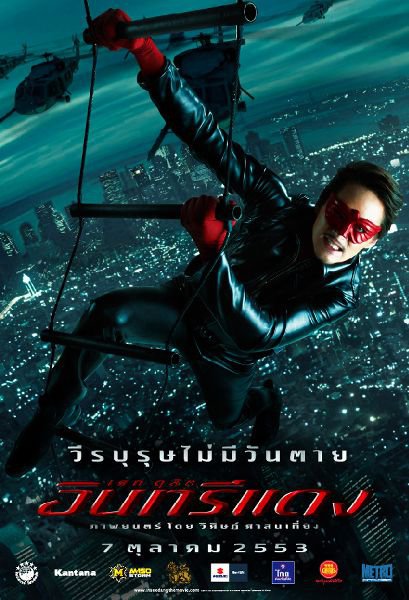 My earlier post on Wisit Sasanatieng’s rebooting of the cult Thai super hero Red Eagle (Insee Daeng) generated a fair bit of interest. The film opened in Thailand earlier this month to rave reviews and is generating a lot of buzz internationally.

According one of my favourite film sites, Wise Kwai’s Thai Film Journal, Red Eagle is “Perhaps the most Hollywood-like movie yet made by the Thai film industry, a big, loud and brash superhero action flick that is mostly relentless in its pace and hyper-stylized violence”.

“Fans hoping for the colorful camp and dry wit of Wisit’s previous films like Tears of the Black Tiger and Citizen Dog might come away disappointed with the director’s latest effort.”

Those wanting a big budget Thai action movie that makes the most of the metropolis of Bangkok as a backdrop will not be.

The film is based on the 1960s action franchise that starred the legendary Mitr Chaibancha, which was originally based on a series of crime novels by writer Sake Dusit.

Lao-Australian actor Ananda Everingham portrays “a much darker and brooding character. Instead of the fun-loving drunken playboy lawyer that was Mitr’s alter ego, this Rome Rittikrai is an angry loner – a former special forces operative who was betrayed on the battlefield. One cool customer, he lives in the basement of an icehouse, and takes morphine because of a bullet wound to the head.”

He comes with a range of great gadgets, including a sword with a collapsible blade, bullet-resistant clothes complete with infra-red goggles and rubber masks so he can disguise himself, as well as the usual assortment of more conventional firearms.

Although the creative team behind the film have been keen to stress they didn’t want the film to be a direct political statement, the parallels between the Red Eagle’s fight against a mysterious criminal society undermining  Thai society and the political turbulence that has wracked Thailand over the last few years, have been drawn by many critics.

Those interested in knowing more can check out the complete review of Red Eagle at Wise Kwai’s Thai film Journal.