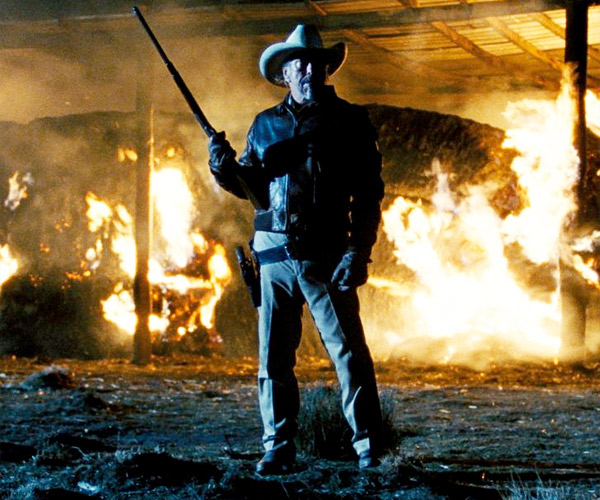 Soon the town is buzzing with speculation that Conway is heading to Red Hill to exact his revenge on the man who put him away, Old Bill. The Sheriff puts together a posse of red necks and local businessmen to defend the town.

“We all know what we’re dealing with,” Old Bill intones as he passes out the guns. “Jimmy Conway rides into town, he’ll bring hell with him.”

The new boy in town, Cooper is assigned to protect the route into town judged least likely to be used by Conway. There’s no prize for guessing what happens. and soon Conway is rampaging through the town dispatching Old Bill’s men and unearthing secrets.

Hughes makes the most of the breath-taking location (the Victorian town of Omeo and its environs). The action is well-directed and fast paced. The soundtrack, part-Morricone, part Australian cock rock also works well with the material.

Casting Lewis as Conroy gives the role a certain gravitas, even if his role is a little too Terminator-like, and allows the film to cover some interesting plot territory. Bisely is great as Old Bill. Kwanten holds also his own.

The only disappointment is the complete under utilisation of van der Boom. She was great in the 2008 Australian film noir, The Square, but in Red Hill she gets absolutely nothing to work with.

It’s the one failure in an otherwise spectacular first film.