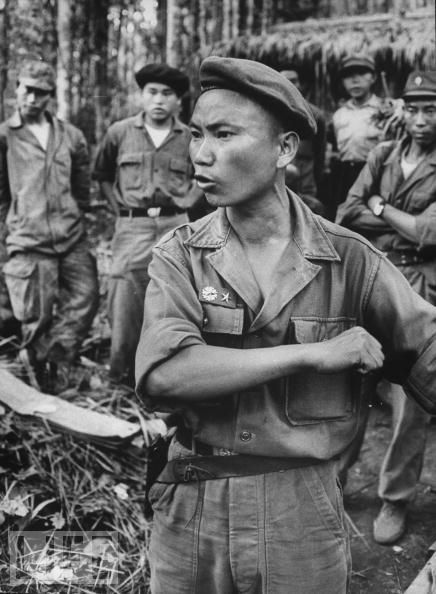 The media coverage surrounding Vang Pao’s death has focused on his leadership role within the Hmong American community. Less has been said about his role in the ongoing insurgency waged by remnants of the Hmong insurgency still in Laos. This came to prominence in 2007, when US federal agents  arrested Vang Pao and ten others for allegedly planning to buy approximately US$10 million in illegal weapons for a planned violent, anti-government coup in Laos (the charges were dropped in 2009).

The following article is an interview with Marc Eberle, the maker of a fantastic documentary about the conflict in Laos, The Most Secret Place on Earth, which I did for the international news agency, Inter Press Service, in 2008. I saw a rough of The Most Secret Place on Earth at the rooftop cinema Meta House in Phnom Penh. Director Marc Eberle together with Fred Branfman, who features in the film were present for Q&A.

I lived in Laos with my partner for several years in the early nineties and know something of its recent history. The Most Secret Place on Earth is not only a great piece of documentary film making, it is a fascinating insight into a conflict which remains shrouded in mystery.

It was known as the ‘secret war’, a covert operation waged by the US Central Intelligence Agency (CIA) throughout the sixties and early seventies against communist guerrillas in Laos.

And the most secret location in this clandestine war was the former CIA air base of Long Chen, in central Laos, a place still off-limits today.

A new film, The Most Secret Place on Earth, to be released in cinemas across Europe later this year explores this little known conflict.

The film, which previewed for the first time in Phnom Penh in mid-August, includes images of Long Chen shot by the first Western camera crew to enter the base since the communists took control of the country in 1975.

“I first got the idea to do the film when I visited the Plain of Jars in Laos in 2002,” recalls Marc Eberle, the 36 year-old German director in an interview with IPS.

“You could still see the craters from the air bombing and unexploded ordnance was everywhere.”

“Then I heard about Long Chen and the fact that no one had got there since the war and I thought, how do I visit and how do I make a film about it?”

Little is known about the Lao conflict despite the fact it remains the largest and most expensive paramilitary operation ever run by the US.

It was completely run by the CIA using largely civilian pilots from the Agency’s own airline, Air America, and mercenaries recruited from the Hmong, an ethnic tribe living in mountainous areas in central and northern Laos.

Despite being the centre of the covert operation and at its peak one of the world’s busiest airports with a population of 50,000 people, Long Chen’s location was never marked on any map.

“I found it bizarre that at one time this was the second biggest city in Laos and it was completely secret,” Eberle says.

Long Chen remains off-limits to foreigners and most Lao due to clashes with remnants of the CIA’s Hmong army and until recently formed part of a special administrative zone under the direct control of the Lao army.

Renewed interest in the Laos’ secret war was briefly rekindled in 2003 when two Western journalists made contact with members of the Hmong resistance, the first white people they had seen since the CIA abandoned them 27 years ago.

Although pictures from the encounter were printed in Time Asia and won a world press award, US media failed to pick up the story and it died.

The decades-old conflict again made headlines last year when US authorities arrested 78 year-old Vang Pao, the head of the CIA’s Hmong forces in the sixties, and indicted him on terrorism charges relating to his alleged involvement in a plot to over throw the Lao government.

Eberle also believes what happened in Laos in the sixties is relevant in that it shares strong parallels with the conflict in Iraq.

“Laos was the progenitor of the way America fights wars in the 21st century,” he says.

“Outsourcing the war to private companies, gathering public support by falsifying intelligence and documents, embedded journalism and automated warfare including the use of so-called ‘smart weapons’, all these methods were first tested in Laos.”

The conflict in the late fifties as Washington sought to counter communist Pathet Lao forces and their North Vietnamese allies who had begun building the Ho Chi Minh trail through the jungles running down the eastern border of Laos.

The operation was placed under CIA control to get around Laos’ supposed political neutrality the conditions set by the Geneva Accords.

Vang Pao, then an officer in the Royal Lao Army, was recruited in 1960 to lead the Hmong troops drafted to fight the communists, which at the peak of the fighting numbered up to 30,000.

The largest of hundreds of airstrips built by the CIA throughout Laos, Long Chen was established soon after.

The Most Secret Place examines the conflict through the stories of players involved in the covert, diplomatic and military aspects of the conflict, including former diplomats, CIA officers and Air America pilots.

It also draws on critics such as Alfred McCoy, author of The Politics of Heroin: CIA Complicity in the Global Drug Trade and a reporter in Laos at the time, and Fred Branfman, an aid worker turned anti-war activist who worked to expose the conflict.

Ordinary Lao people on the receiving end of the world’s most technologically sophisticated military machine get a chance to tell their story.

Although there is a short interview with Vang Pao, the one aspect of the story not adequately dealt with is the plight of the Hmong, who bore the brunt of some of the most savage combat and with the exception of senior officers and their families, were abandoned when the US pulled out.

One of the most interesting aspects of The Most Secret Place is the some of the previously unused footage Eberle managed to collect, including film of actual combat missions and day-to-day life at Long Chen.

This was gathered from myriad sources, including the US National Film Archive and footage held by television stations from across Europe.

“The CIA had just declassified a whole lot of material so that helped as well,” he says. “The most important source was the guys who were over there filming with their little super 8 cameras, often illegally.”

This film’s analysis sets it apart from other books and documentaries on the subject, most of which justify the conflict, lauding the CIA operatives and their Air America pilots as heroes.

The reality, as Alfred McCoy says towards the end of the film, was very different. “We destroyed a whole civilisation, we wiped it off the map. We incinerated, atomised human remains in this air war and what happened in the end? –We lost.”

The covert nature of the conflict meant that US planes forces were able to ignore virtually all the rules of engagement operating in Vietnam. Every building was a potential target and the civilian toll was huge.

The situation grew worse in 1970 when US President Nixon authorised massive B52 bombing strikes on Laos, which remained classified information until many years later.

American planes dropped an average of one planeload of bombs on targets in Laos every eight minutes, 24 hours a day for nine years, making it the most heavily bombed country on earth per capita in the history of warfare.

Eberle remains cagey about exactly how he managed to gain access to film at Long Chen. “It was a matter of having the right contacts,” he says.

The last film crew to try to get there were caught and convicted to 15 years prison, although they were eventually freed after four weeks due to international pressure.

“After we went another UK crew tried to get there but they were caught and deported,” he adds.

“There are some places in the world that have a different energy and Long Chen is one of these. You look down the runway and think this is the place were it all happened. The planes took off from here and bombed all those people.”

The film, which contains aerial footage of the base as well as shots from the ground, shows Long Chen today as an overgrown airstrip surrounded by heavily forested mountains.

“It’s just an army outpost now. A small village a couple of hundred people, soldiers and their families.”

The buildings, including Californian bungalows and a number of other structures designed in sixties style, largely lie vacant and derelict.

“The golden age of Long Chen is over. It used to be the high-tech oasis for spooks in Laos. There were allegedly more antennas there than trees. Now they do not even have power.”

The 2007 arrest of Vang Pao along with eight other Hmong and a former US army ranger in Vietnam on charges of allegedly plotting to topple the Lao government, has highlighted the current state of Hmong resistance inside Laos.

Eberle believes, as do many other observers in Laos, that the resistance is on its last legs.

“There are still some groups but they are not organised. They are certainly not politically or militarily organised. They are remnants, the children and grandchildren of those involved in the war who are scared to come out of the jungle because they have never known anything else.”

“Whether Vang Pao is guilty or not of the charges he is facing, one thing that is true is that he and other expatriate Hmong have used these people as pawns,” maintains Eberle.

The decline in the resistance has been accompanied by talk of opening up Long Chen and the area around it to tourism.

“I do not see that happening in the next few years. It is still far too sensitive on the part of the Lao government,” says Eberle. “They are also keen not to risk unsettling relations with the Americans by opening it up.”

“It is the last chapter of the Vietnam War and both governments have an interest in making sure it is forgotten.”

This entry was posted in Crime fiction and film from Laos and tagged Marc Erble, The Most Secret Place on Earth. Bookmark the permalink.