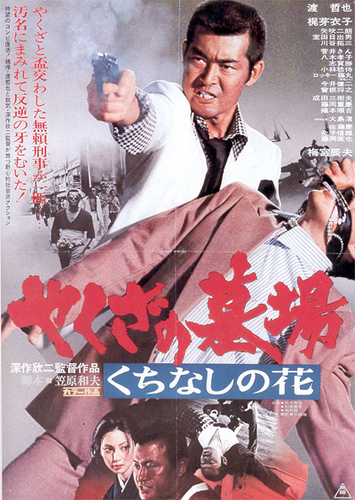 The sixties saw the emergence of new directors (the best known of which was Seijun Suzuki) who depicted the Yakuza and their elaborate rituals as no different to the trials and tribulations of the average Japanese salary man. Whether you worked for a homicidal crime boss or a large corporation, the hours were long, career advancement was hard and someone was always ready to take your place the moment you tripped up.

In the seventies, the Yakuza began to be portrayed more accurately as  violent, brutal, corrupt gangsters, who’d long ago given up any notion of chivalry for a slice of Japan’s economy growth.

The Japanese studio system collapsed in the eighties, under the impact of Hollywood imports and the advent of home videos. Yakuza films didn’t revive until the early nineties through the efforts of new directors such as Takeshi ‘Beat’ Kitano and Takashi Miike.

Which leads me back to my original question, where to begin the journey?

As a fan of seventies American and Australian crime cinema, I thought it would be interesting to check out what the Japanese were doing around the same time. So I settled on Kinji Fukasaku’s 1976 film, Yakuza Graveyard (an excellent version of which is now available through Kino International).

Yakuza Graveyard is set in Osaka. Economic problems are putting the squeeze on the city’s organised crime gangs. The two biggest, the Yamashiro and Nishida clans, are eyeing off each other’s operations. The situation is tense as the police brace themselves for all out war. Enter Detective Kuro (Tetsuya Watari), charged with enforcing peace between the gangs.

The same year Yakuza Graveyard was released the third Dirty Harry film, The Enforcer, hit US cinema screens. Although Eastwood’s portrayal of a blunt, laconic cop unafraid to break the rules is now highly regarded, at the time the films were heavily criticised for their brutality and what many critics saw as the central character’s fascist tendencies.

Dirty Harry may have been a loose cannon, but Detective Kuro is a hand grenade with a badge. A violent, chain-smoking alcoholic, it’s not clear what side he’s on. One minute he’s coercing a confession out of a low-level Yakuza operative, the next he’s befriending a senior gangster known as “The Bull”. The two men beat each other half senseless at a major Yakuza ceremony and make-up over whisky and foreign prostitutes.

Kuro is already involved with an alcoholic prostitute whose husband he killed in a bust several years earlier. But that doesn’t stop him from sleeping with Keiko (seventies Japanese female action film icon Meiko Kaji who starred in Lady Snowblood and one of the best named films ever, Female Convict Scorpion), the wife of an imprisoned Yakuza boss. They are brought together by cynical world views and the fact they are both mixed raced.

The blurring between right and wrong is a central theme in Yakuza Graveyard. Kuro’s hatred for the Yakuza is only rivalled by his contempt for the police pen pushers who in his view prevent him from doing his job. He believes both sides are hypocrites, and when Kuro discovers senior police are siding behind the scenes with one gang against another, he goes rogue and decides to form his own alliances.

Little known in the West, Fukasaku was a major creative force in Japanese cinema, making roughly 60 films over a career spanning four decades. His most critically acclaimed, Battles Without Honour and Humanity (1973), about a returned Japanese soldier’s bloody rise in the post-war Hiroshima crime scene, spawned four sequels and kick started the more realistic cinematic depiction of Yakuza.

Yakuza Graveyard was one of Fukasaku’s last films to deal with organised crime, as such the chaos is particularly pronounced. This is further emphasised by the film’s jazz soundtrack and his use of hand-held cameras. Fukasaku also freezes the film at certain points while the narration continues. Both technique are common now but were much less so in 1976.

This is the first in what will be an occasional series of reviews of Japanese crime film over 2012.