Off Limits in Saigon 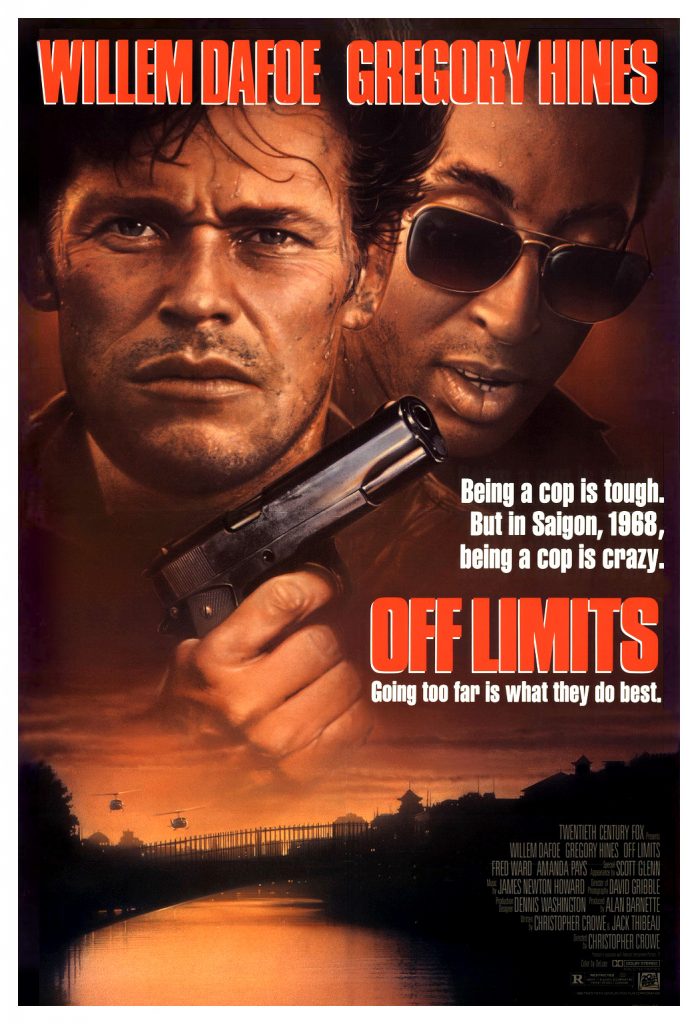 I’m very happy to welcome back to Pulp Curry my partner in crime, Angela Savage, reviewing the 1988 film, Off Limits (which also appeared under the title Saigon). I first saw Off Limits years ago and always liked the originality of the premise – two US military police on the beat in war-time Saigon. Watching it again recently, I’m curious to know, what if any unacknowledged debt the movie owes to the Martin Limon books featuring Sueno and Bascom, two US military police stationed in South Korea in the seventies. Oh yes, and I definitely agree with Angela that Fred Ward is an underrated actor.

Off Limits, set in Saigon in 1968, is a riveting crime thriller that conveys the madness of the US war in Vietnam while treating it as background to the main story.

The plot centres on Criminal Investigation Division (CID) cops Sergeant Buck McGriff (Willem Dafoe, all thin hips and big lips) and Sergeant Albaby Perkins (Gregory Hines, chewing gum like it’s the only way he can keep the bile down) and their investigation into what turns out to be the serial killings of Vietnamese prostitutes.

With a short-list of suspects made up of US military top brass, they have to navigate a case as off limits as the part of Saigon where the murders take place.

Adding to multiple readings of the film’s title is the relationship that emerges between McGriff and Sister Nicole (a radiant Amanda Pays) a nun on the verge of taking her final vows, who has worked with several of the murder victims.

In the course of their investigation, McGriff and Perkins fly into the De-Militarized Zone under bombardment to interview their predecessor, who has chosen the DMZ as a safer alternative to pursuing the serial killer.

Their staff sergeant Dix (the underrated Fred Ward) begrudgingly backs up their investigation, but their key witness is the victim of a hit, their chief suspect throws suspected Viet Cong agents then himself from a helicopter, and more prostitutes get killed. The CID cops have to face off regularly against the local Military Police lead by ‘Lime Green’ (a dapper Kay Tong Lim) in a turf war neither side will ultimately win.

It is Sister Nicole who provides McGriff and Perkins with the connections that eventually lead them to identify the killer, via a side trip to the Cuchi Tunnels. There are no real surprises in the denouement, though by that stage, I was less interested in the resolution of the case and more in the audacity of a film that convincingly portrays a couple of American cops as caring more about justice than patriotism, and has one of them (chastely) loving a nun.

Off Limits is daring, if not perfect. There is a scene involving a standoff between the CID cops and Lime Green and his local MP, which for me goes to the heart of why the US could never win in Vietnam. The resolution of the scene is pure fantasy – McGriff and Perkins are rescued by Dix and his superior fire-power – but it feels self-conscious, too, an admission that such a resolution in America’s favour could only ever exist as fantasy.

The Time Out film guide suggests ‘the Saigon setting is simply a seedily exotic backdrop’ to the film, but given Off Limits was actually shot in Bangkok, I figure it made sense for the filmmakers not to dwell too much on the setting. Look closely and you’ll see the Thai script in the street signs and on shop fronts. And in one scene that made my partner and I snigger like the Asia-hands we imagine ourselves to be, a sex worker being interrogated in Vietnamese answers in Thai.

This only adds to my opinion that Off Limits is a diamond in the rough, an anti-war movie in the guise of a compelling crime thriller, carried by daring and the strength of its two male leads.