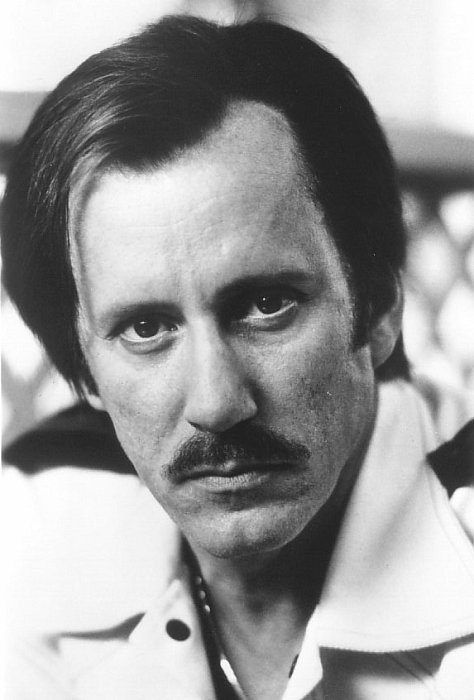 Against All Odds (1984): Woods plays Jake Wise, sleazy gangster and nightclub owner who hires ex-football player Jeff Bridges to find his girlfriend in Mexico. If you can put the Phil Collins soundtrack aside for one moment this re-make of the noir classic Out of the Past is not nearly as ham fisted as it first appears. It’s also helped enormously by the presence of Richard Widmark in a supporting role.

Best Seller (1987): Sleazy unbalanced hit man Cleve approaches best selling author and cop Brian Dennehy to write the story of his work as a hired killer for a corrupt politician. Cleve omits the fact that he nearly killed Dennehy in a robbery several years earlier. This is definitely one of the better crime flicks of the eighties.

True Believer (1989): Eddie Dodd, a disillusioned, sleazy former civil liberties lawyer whose clientele now consists of drug dealers and other assorted criminals. With a bit of prodding by a very young Robert Downy Junior, Eddie reluctantly takes the case of a young Korean man in jail for a murder he did not commit. Not the best film to ever burn up the screen, but even Woods manages to salvage something from it.

Diggstown (1992): Fresh out of prison, Woods as ex-con Gabriel Caine wages with the owner of a boxing-mad town (Bruce Dern) that he can find a fighter who can knock out ten local men in 24 hours. Not the greatest boxing film ever made but good for a laugh.

Another Day in Paradise (1998): In the hope of a big score, two older junkies – Woods and Melanie Griffith – team up with a couple of up and comers to commit a series of robberies that end up going disastrously wrong. Directed by Larry Clark (Ken Park and Bully), this thoroughly nasty little heist film has everything, including an unhinged criminal preacher.

I haven’t even mentioned Once Upon a time in America (Woods as sleazy gangster), The Boost (sleazy eighties businessman with a bad coke habit) and Salvador (sleazy journalist).

But the winner of my James Woods’ festival is in the little known Fast Walking (based on The Rap, a novel by US author Ernest Brawley, which I have not read cannot find for sale anywhere), released in 1982. Woods plays Frank ‘Fast Walking’ Minivar, a permanently stoned prison guard, who as a side line pimps girls to the local Chicano farm workers out of a couple of shot gun shacks out the back of his aunt’s grocery store.

The prison is on edge after the murder of a black inmate, a situation worsened by the imminent arrival of William Galliot, a radical black nationalist. The Klan want Galliot dead and there are rumours the prison authorities have put a contract out on him.

Minivar is pressured by Rosco, his Neo Nazi biker cousin, also an inmate, to kill Galliot for $25,000. He is also approached by a group of black nationalists to bust Galliot out for $50,000.

For all Minivar’s faults, racism is not among them. An equal opportunist hustler, he decides the best way out of minimum wage hell is to try and play both sides against each other.

Apart from a young Woods, there is so much that is interesting in this film. It’s well written. Some of the dialogue, for example when Rosco fronts the prison’s head drug dealer with a view to taking him over, is magic.

Fast Walking takes its time establishing the plot and character and is not perturbed examining side plots that at first don’t seem to have any connection to the central theme. Black power, racism, the fading influence of the counter culture, and drug use and and violence in prison, are just some of the issues touched on.

There’s a Lalo Shrifrin soundtrack and a tremendous supporting cast, including J Emmett Walsh (who has himself played some pretty sleazy film characters) as Minivar’s supervisor at the prison and B-movie siren Kay Lenz as a mysterious femme fatale who is connected to his biker cousin.

It is definitely one not to miss next time you do your own James Woods fest.