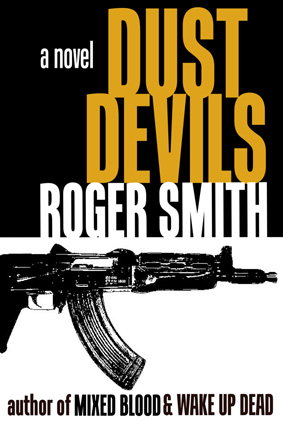 Recently released from jail where he was serving a sentence for taking part in the massacre of black civilians, Goodbread is dying of lung cancer and despised by his son. He’s also Dell’s only chance of finding out why his wife and child were murdered and why the killer wants him dead.

Two other characters round out the story.

The wonderfully named Disaster Zondi, a former intelligence cop with links to the anti-corruption forces in the country’s government.

Sunday, a young Zulu woman who is being forced to marry Inja. Inja has full-blown AIDS and believes the only cure is to take the young virgin as his wife and sleep with her.

There’s not a single shred of mercy in Dust Devils. Long gone is the idealism of the newly formed post-Apartheid South Africa. In its place, rampant crime, HIV/AIDs, high-level corruption and poverty.

Smith is a former scriptwriter and it shows. The writing is clear and crisp, the plot never lets up and there’s a great sense of place.

The incredible violence is leavened by Smith’s keen understanding of the class and race politics of the new South Africa. It’s infuses everything, how the characters talk, act and look, like an invisible inner skin.

Books as good as Dust Devils make me pine for the day that we stop obsessing about Scandinavia and get to the where the real action is in terms of crime fiction, places like Africa.

I’ve previously written on this site about Malla Nunn’s debut crime novel set in fifties South Africa, A Beautiful Place to Die. Last Friday night I attended the launch of the SheKilda woman’s crime writing festival in Melbourne, where I heard a great speech by South African-based crime writer, Margie Orford the the author of the Dr Clare Hart series.

As Goodbread says at one point to his son in Dust Devils, ‘Welcome to the goddamn heart of darkness’.