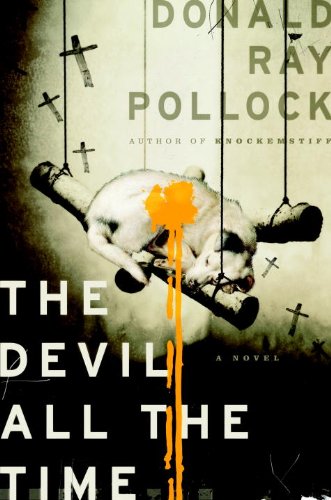 This book is very different to the other Miami crime novels I can remember reading, in a good way. The main characters are a hedonistic, python owning call girl named Renata and her shy, voyeuristic wannabe writer neighbour, Julie. Renata attracts trouble like a magnet. One of her regular Johns, a poetry professor called Richard, is dangerously infatuated with her. Then there’s the shit that’s stirred up when Julie accidently kills another of Renata’s customers. The women have to employ a couple of low life criminals to dispose of the body but of course they fuck it up. Cruel Poetry is a wonderful little tale of murder and blackmail, featuring a love-triangle with a difference.

Also on my list for a while has been The Adjustment by Scott Phillips, which I read as an e-book. I’d heard a lot about this one, and it lived up to the hype. It’s a wonderfully bent little tale in the best of pulp tradition of Charles Willeford. The main character is Wayne Ogden, a devious, violent ex-US soldier who returns to life in sleepy Wichita after WWII. He spent the war as a supply Sargent cum black marketer and pimp. Upon his return he gets a job as a fixer for the corrupt, skirt chasing owner of a local aircraft factory, which is where things really get complicated.

But the absolute knock out of my most recent reads is The Devil All the Time by Donald Ray Pollock. My enjoyment of this book is matched only by the difficulty I’ve had trying to describe what it’s about and how good it is to people.

The Devil All the Time is a violence soaked multi-generational gothic novel set in the backwoods of Ohio and Virginia. It opens with the return of a soldier from the carnage of the Pacific war and his drift into religious madness over the terminal sickness of his wife. The other characters include a couple of evangelical Christians who perform at church services (one of whom has a bizarre side-line involving spiders), a corrupt backwoods law man and a husband and wife team of roaming serial killers who like to photograph their dead victims in sexual positions.

Pollock’s bio says he dropped out of school and worked a succession of blue-collar jobs before taking up writing and The Devil All the Time is his first book. He also has a collection of short stories called Knockemstiff, which I’ve just ordered.

Seriously, just take my word and read this book. It’s the product of a dark, unhinged brilliance and I loved it.