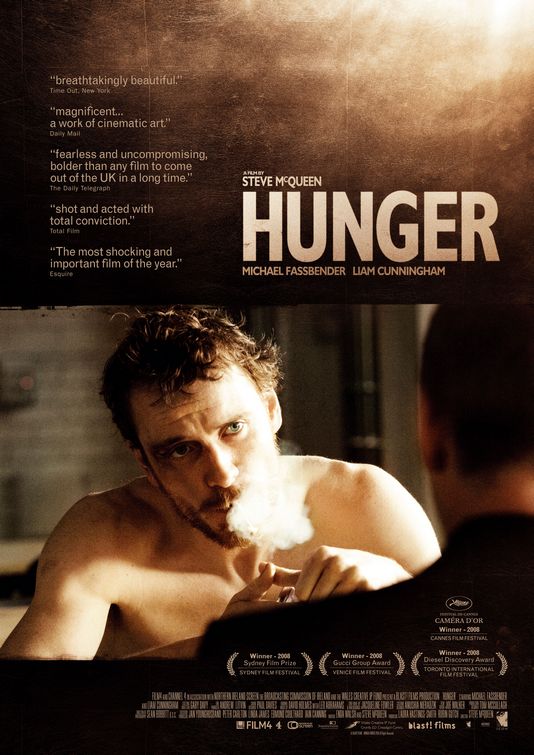 It opens with the arresting image of a pair of bloody knuckles being soaked in water. These belong to one of the prison guards and were acquired administering incredibly savage beatings to IRA prisoners in response to their “blanket and dirty protests” in which the prisoners refused to wash and smeared shit over the walls of their prison cells. The guard is subsequently murdered in the aged care home where his mother lives, one of 16 guards killed by paramilitaries in retaliation for the treatment of the prisoners.

Michael Fassbender’s depiction of Sands is nothing short of astonishing given that the meat of the character hangs on just one scene in the 91-minute film, a conversation between Sands and a sympathetic priest, in which the Republican prisoner goes from jovial to hard headed political militant in the blink of an eye via a vignette about cross country running when he was a youth.

Hunger is one of the few contemporary examples I can think of a successful prison film. They were huge in the thirties, when heaps of movies about men serving time where churned out, and were a staple of forties and fifties noir. They appeared more infrequently after that, the exception being the huge wave of women in prison films that were so popular in the seventies and eighties, like Big Doll House (1971) and Jackson County Jail (1976)

Hunger got me thinking about what makes a good prison film. A crucial ingredient is that there’s no pretense the prisoners are there by accident. Whether they committed political or criminal acts, in the best prison films the inmates know why they are inside and they have two choices: make the best of the situation or escape.

Brute Force: Directed Jules Dassin, who made Thieves Highway (1949) and Night and the City (1950) before being driven out of Hollywood by the anti-communist witch hunts of the fifties. This 1947 film examines the battle of wills between the inmates of cell R17 led by Joe Collins (Burt Lancaster) and a sadistic head guard. Fed up with their treatment, the inmates plan a break out. It’s a tough, brutal film that still packs a punch. The scene where the prisoners use blow torches to force a stool pigeon to his death in a stamping machine is particularly memorable. Another solid (but hard to get) prison noir is Caged (1950), in which a naive nineteen year old widow becomes coarsened and cynical after being sent to a woman’s prison and exposed to hardened criminals and sadistic guards (led by Agnes Moorehead’s as a sexually predatory head warden). 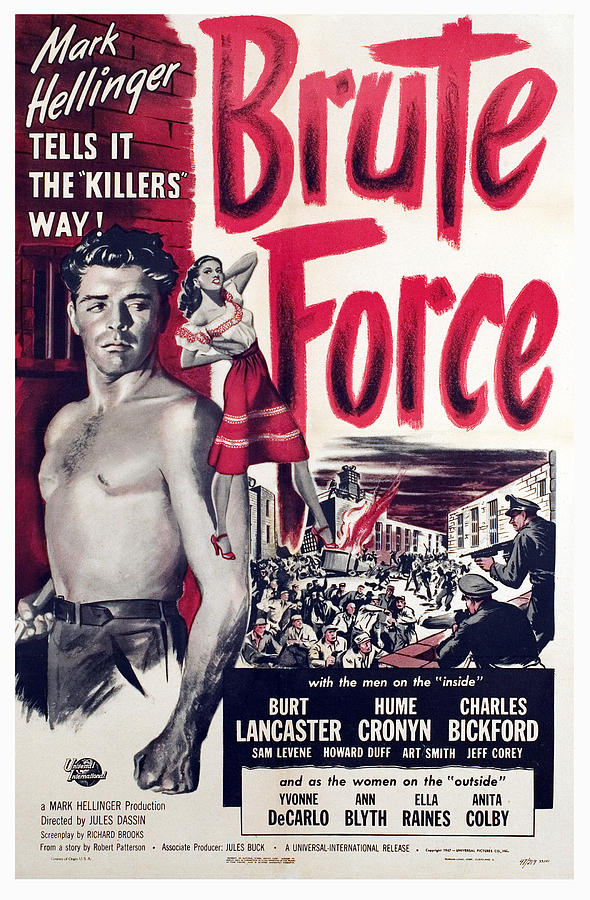 A Prophet: Made in 2002, this French film directed by Jacques Audiard, depicts an impressionable young Arabic man (Tahar Rahim) sentenced for a petty crime to a jail on the verge of war between the Arab inmates and the Corsicans who have traditionally run it. The prisoner soon discovers the opportunities for criminal advancement in prison dwarf anything available to him on the outside.

Stir: This 1980 Australian film was inspired by the true-life prison riot at Bathurst Jail in 1974. Starring a young Bryan Brown, it features one of the most honest and non-sensationalised depictions of homosexuality in prison I have seen on film. Other good Aussie prison films include Ghosts of the Civil Dead (1988) and the little known Everynight… Everynight, released in 1994 and based on a play about the early life of infamous contract killer Christopher Dale Flannery.

Fast Walking: Based on The Rap, a novel by US author Ernest Brawley, Fast Walking was released in 1982 and starred James Woods as Frank ‘Fast Walking’ Minivar, a permanently stoned prison guard with a side line as a pimp. The prison he works in is on edge after the murder of a black inmate, a situation worsened by the imminent arrival of William Galliot, a radical black nationalist. The Klan wants Galliot dead and there are rumours the prison authorities have put a contract out on him. Rosco, his Neo Nazi biker cousin, also an inmate, pressures Minivar to kill Galliot for $25,000. He is also approached by a group of black nationalists to bust Galliot out for $50,000. When I reviewed Fast Walking on this site last year it was almost impossible to get in DVD. It has since been released as part of the Warner Archive collection.

Other contenders for inclusion would be Stuart Ronseberg’s Cool Hand Luke (1967), McVicar (1980) starring the Who lead singer Roger Daltrey and, of course, Alan Parker’s Midnight Express (1980). Although it’s ages since I’ve seen it, I’m also very fond of the 1985 Brazilian American film, Kiss of the Spider Woman.