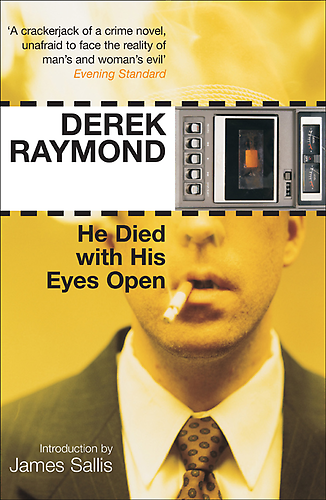 There’s no apparent motive and all the cop has to go on are a series of old cassette tapes left behind in the dead man’s property. They contain the deeply unhappy ramblings of the dead man, the break up of his marriage, the loss of his daughter, his failure as a writer.

Parallel with this, the cop chases down the equally miserable acquaintances of Staniland’s life, the ex-girl friend who relished cuckolding him, his employers, the owners of the numerous dives he drank in.

He Died with His Eyes Open is a deeply unsettling book, made even more uncomfortable by Raymond’s sparse, hard-hitting prose and blunt observations

For example, the narrator’s description of a fellow cop:

“He was a brutal-looking blond of about twenty, who moved about with a controlled restlessness, cherishing his fists.”

“There are a few houses adjoining, all new, where men garden at the end of the day, doing things to their hedges with clippers they bought by direct mail. Lining the concrete road are a few acacias that don’t look like they would get far in life; that’s how the raw scar of my street got its name.”

About delving into Staniland’s life:

“Too late I’ve discovered that if you strip people down to the truth you give them no chance to survive. Lies and evasions are necessary; they give us a chance to dodge.”

Most police procedurals deal with crime from the point of view of the police. What’s unusual about He Died with His Eyes Open, is that the cop concerned is like one his victims.

I suspect there’s more than a little of the author in the book. At one point, after listening to Staniland’s tapes, the narrator says, “Anyone who conceives of writing as an agreeable stroll towards a middle class life-style will never write anything but crap.”

Raymond was the pen name taken by Robert William Arthur Cook, an English writer, who eschewed his upper middle class family for an itinerant life of odd jobs, travel, bohemian experience and frequent brushes with the law.

Although he wrote for years, success eluded until with the publication of He Died with His Eyes Open in 1984, the first of five books that make up the so-called Factory series.

I’ve already ordered the next in the series, I Was Dora Suarez.