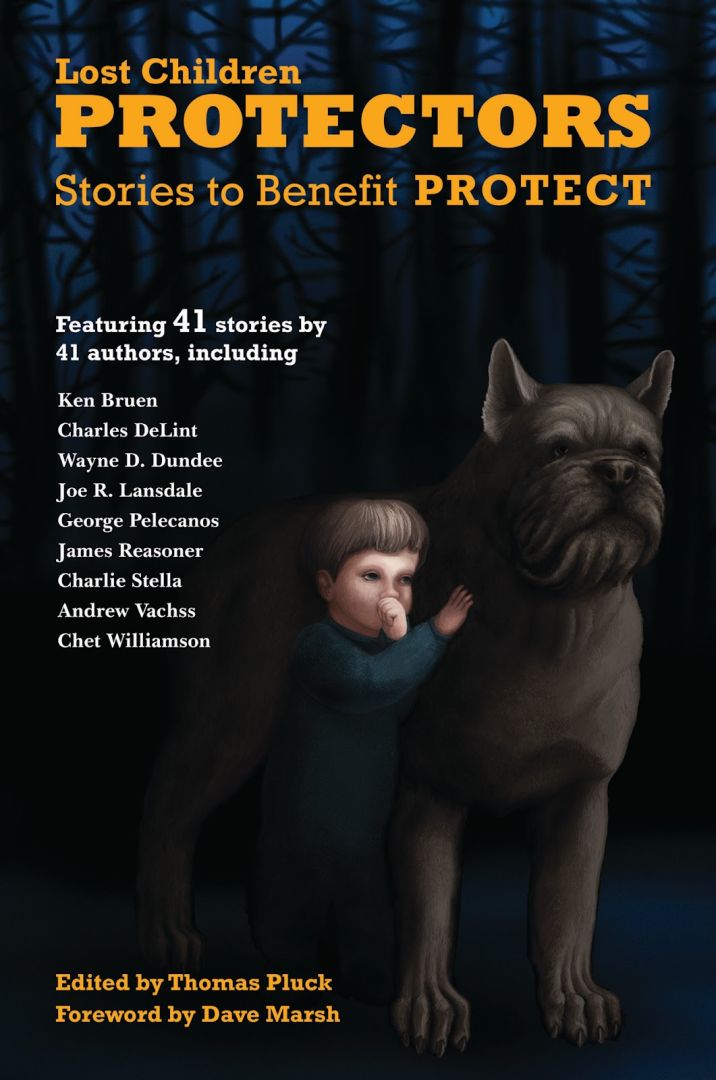 For my fifth ‘Noir Con or bust’ guest post, I’d like to welcome New Jersey based crime writer Thomas Pluck.

Pluck’s stories have appeared in PANK, Crime Factory, Spinetingler, Beat to a Pulp, McSweeney’s Internet Tendency, The Utne Reader, to name a few.

I’ve been pimping my own work a lot lately, but I was keen to get Pluck to write a guest post so I could shill for his latest project Protectors: Stories to Benefit PROTECT, which he’s the editor of. Seriously, this anthology contains some seriously good writing talent doing a mixture of crime, science fiction, Western, noir and other stories. I mean serious. There’s a copy on my Kindle.

I’d try and explain why there’s other good reasons you should buy the book, but Pluck does a better than me. Read his post, then buy the book.

“Hemingway once wrote, ‘The world is a fine place, and worth fighting
for.’ I believe in the second part.”

That’s from the screenplay of Seven, written by Andrew Kevin Walker. I
don’t know if Hemingway actually wrote what he said he did, but that’s
a great line and it explains how I can write hardboiled fiction and
not eat a gun in the morning. As writers, we peer into the dark heart
of humanity and the abyss winks right back. Shining a light on this
squalor to scatter the roaches doesn’t change anything. If anything,
It jades us.
It is what it is.
What you gonna do?

I’m of the mind that it only is because we let it, and I decided what
I was gonna do back in January, when I began inviting writers to take
part in my anthology Protectors: Stories to Benefit PROTECT.
Protecting the kids has become a joke, at least in American politics.
It’s “for the children”. Except it almost never is, and if it happens
to effect useful change, it doesn’t get funded. PROTECT is a lobby
which changes that. They fight for laws with teeth, and they hang on
like a dozen pit bulls until those laws are funded and put to work, so
they don’t sit on some politician’s shelf gathering dust like a high
school trophy.

It’s easy to get writers behind such a sentiment. These days people
think clicking ‘like’ on Facebook makes you a radical activist. I
approached dozens of writers and 40 of them stood up and hit the ball
out of the park. As they filed in, I approached more and more- from my
hardboiled heroes such as Ken Bruen, Joe Lansdale, George Pelecanos
and Andrew Vachss to legends of other genres such as Charles de Lint
and James Reasoner. I gathered like-minded writers such as Chad
Eagleton,Tony Black, and Wayne Dundee, and made new allies like
Michael A. Black, Roxane Gay, Zak Mucha and Jen Conley.

How does a writer of bleak fiction justify this hope in the future? I
opened with the quote that says it all. It may not be a fine place to
those of us who aim our lens at moral frailty, but it is worth
fighting for. To paraphrase Andrew Vachss, in this fight we’re all
swimming toward a horizon that we’ll never reach. There will be no
magic, no hundredth monkey to see the light and change the dual nature
of humanity in our lifetimes. I’m a fighter and I can’t throw in the
towel, especially when I have so many great people in my corner. My
trainer never said I was any good, or particularly sharp. He told me I
had heart, because I never quit. Not even when it would have been a
good idea.

That’s how I became a writer. By not quitting. Hitting those keys
every night. Turning ideas in my head until they made sense. Walking
my neighborhood like a madman as characters and scenes came to life,
and looking like the crazy bearded street guy, making groups of young
men quietly cross the street. I took that wild enthusiasm and focused
it here. A lot of good people joined in, and I hope you will too.

Join me and fight for this broken dirty world: be a Protector. Available were good books are sold.

Australian folk, you can buy Protectors: Stories to Benefit PROTECT on Amazon in hard copy here and as a digital book here.