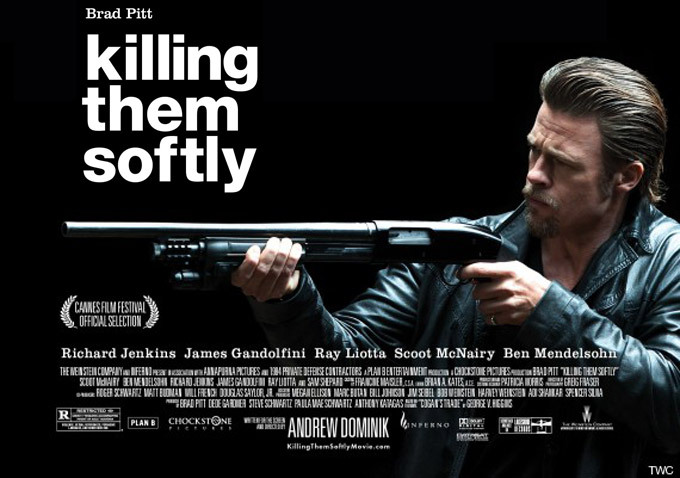 It’s hard to exaggerate just how influencial the movie version of The Friends of Eddie Coyle is. Released in 1973, it is a no frills depiction of desperate men doing whatever they have to do to stay one step ahead of each other and the law. Robert Mitchum headlines as Coyle, working with a veritable who is who of character actors from US crime films in the seventies and eighties.

The script crackles with jaded criminal ennui and there’s some fantastic early seventies Boston period detail. As film critic Kent Jones says in his lucid essay accompanying the release of the Criterion version: “Young film fans raised in the multiplex era might look back and lament the fact that no one is making movies like The Friends of Eddie Coyle anymore. The truth is that they never did. There’s only this one.”

Which is a longwinded way of saying, while it may be unfair to compare the two films it’s hard not to go into a screening of Killing Them Softly without big expectations. Luckily, Andrew Dominik, who directed and adapted the screenplay (and whose credits include the Australian crime cinema classic Chopper in 2000), does a great job.

The cast includes Bradd Pitt, Ray Liotta, Richard Jenkins, Ben Mendelsohn and James Gandolfini. Pitt is particularly good as Jackie Cogan. Cold, calculating, cynical, his performance more than proves my theory that he would have made a much better Parker in the reboot of that film than Jason Stratham.

The only one who comes close to touching Pitt is Gandolfi, who is wonderful as an aging mob hit man far past his prime.

Liotta, the mobster who runs the card game that is robbed, a sort aging Henry Hill, is also in top form. I don’t know what it is about him, but the older and more worn out Liotta looks, the more I like him.

The plot of Killing Them Softly is minimal. Like The Friends of Eddie Coyle, it is mainly a series of clandestine encounters in which criminals talk about the process and mechanics of their work. Aspects of the film are a little too stylised for my tastes, but mostly it works thanks to a great script, chock full of wise guy allusions and junkie small talk.

Adding to this is the overwhelming sense of decay and alienation. Dominik sets the story amid the 2004 financial crisis. Everywhere buildings are empty, people are doing it hard, even criminals. There’s a palpable feel of exhaustion and alienation.

But it’s not just the economy that is a mess, the Mafia are a shadow of their former selves, depicted for the most part as a bunch of clapped out old men and cautious time servers, clinging desperately to the last trappings of their power base.

I haven’t read Cogan’s Trade but after watching Killing Them Softly I intend to.