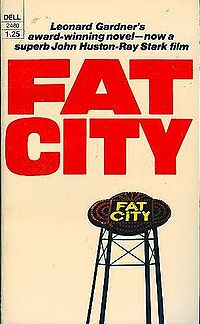 Set in the fifties, Fat City is the story of two amateur boxers, Ernie Munger and Billy Tully. Tully is the older of the two, a former fighter who wants another shot at the big time. The fact he’s an alcoholic means he’s got no chance. Munger is a young man with potential, but you know from the first time we meet him, he’s not going to amount to much. The book follows the hopes, dreams and most of all, anxieties of these two men through a series of bars, flop houses and dead end jobs. As I said, there’s never any doubt the two won’t amount to much, the question is just how far they’ll slide.

I loved everything about this book, the writing, characters, the depiction of fifties California. Everything. It’s 182 pages of prose to die for. 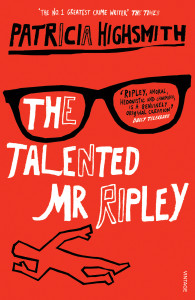 Patricia Highsmith’s The Talented Mr Ripley is another book made into a film I’ve been meaning to get into for a while. Again, I’m glad I made the effort. I’m sure people are familiar enough with the plot for me not to have to spell it out in detail. What surprised me most about Highsmith’s novel is how delightfully bent her story telling is. I particularly loved the way she skewed the middle class pretencences and mores of the post-war US middle class.

My only criticism of the book, and it’s hardly Highsmith’s fault, is that it feels somewhat dated. Tom Ripley is a man struggling with his sexuality and homicidal tendencies. But I couldn’t shake the feeling as read, that if he was alive today, he’d be giving vent to these by being on reality TV.

Jim Nisbet’s Lethal Injection has been on my radar for a while now. I’ve learnt from experience that having a James Ellroy quote on the front over saying how noir a book is, is no guarantee I’m going to like what’s inside. 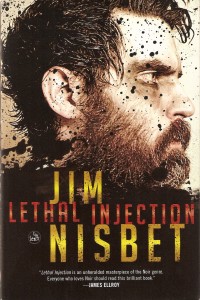 I’m pleased to say in the case of Lethal Injection, the hype is justified. Franklin Royce is an alcoholic prison doctor who executes people on behalf of the state of Texas. But when he kills a black convict (a chillingly portrayed scene), he’s left with the strong impression he’s just terminated the life of an innocent man.

With his practice in the toilet, his marriage on the rocks and a sense he’s a middle aged failure, Royce decides to try and redeem himself by finding the truth behind the executed prisoner’s alleged crime. I won’t spoil the plot, except to say, his journey takes him deep into a hellish world of junkies and criminals, a world where he quickly abandons any lingering preconceptions about what he is capable of. On the strength of Lethal Injection I’ll definitely be checking out more of Nisbet’s considerable backlog of work.

Speaking of Ellroy, of everything I read over the holidays his novella Shakedown definitely required the least effort. Probably more interesting because it’s his first foray into digital only publishing, Shakedown features Freddy Otash, a corrupt cop, extortionist, pimp and bit player in the author’s LA quintet series of books. The story is essentially Otash’s confession while he is waiting for redemption in hell. No surprises in this one, not even any attempt on Ellroy’s part to stretch himself. If you dig his stuff, and I do, you’ll like it, if not, you won’t. Nothing more to say than that.

Dead Sea by Sam Lopez was released last year by new kid on the block small publisher Crime Wave Press, specialising in crime fiction set in Asia. After intervening one night to stop a particularly brutal mugging, Luke meets the victim’s daughter, Tara. They have dinner together, end up in bed, and before you know it, a year has passed and they’re travelling in the Philippines. The thrill of their initial meeting and the early days of travelling have long faded, replaced by boredom and, on Tara’s part, a feeling she’s wasting her life and needs to get back to England. 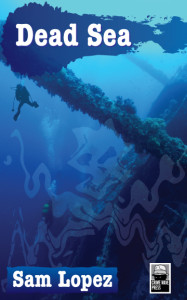 Along with two other young travellers Luke and Tara travel to a hard scrabble but untouristed island called Oras and have a series of increasingly fraught encounters with the locals. Just when things are beginning to get out of control, they meet Eduardo, a long-term English expatriate who lives on a remote stretch of Oras. He’s a lovable rogue, full of adventure stories and faux Eastern mysticism. Eduardo makes the young travellers what seems like an impossibly good proposition. Eduardo is going to take his luxury yacht, named the Blue Beard, on a little trip to an unchartered reef where he’s heard there’s the wreck of a Japanese destroyer. Would they like to crew for him in exchange for unlimited diving and a ticket off Oras. What could go wrong?

Dead Sea is a mixed bag. The structure of the book, a series of interweaving flashing backs and forwards, takes a bit of getting used to and will annoy some readers. Similarly, the ending is a bit abrupt and will either leave you blown away or disappointed. That said, it is a strangely compelling story and the the Philippines is an Asian country I’ve long thought has been neglected as a setting for crime fiction, so any attempt to rectify this is going to win points with me. The book is at its strongest when dissecting the worldview of the long term Western tourist, the way prolonged travel can be both enormously exciting and boring, what can happen when foreigners who feel they have seen everything suddenly realise they don’t have a clue what is going on.

Last but not least, over the holiday period I finally got into Australian academic Nicole Moore’s The Censor’s Library. This is a fascinating and meticulous work which came about when Moore discovered the secret library of Australia’s censors – 793 boxes of banned books from the 1920s to the 1980s. Of particular interest to me are the sections of the book that deal with the censorship of pulp and popular fiction in the sixties and very early seventies. The fact that Australia had perhaps the most punitive censorship regime in the Western world is just one of the many amazing things I’ve learned from Moore’s work so far.

And now for how I’m going to approach reading in the year ahead.

I’m going to be less stressed about my reading in 2013, read what I want, when I want. Yeah, I know, that sounds weird and regular readers will probably wonder, ‘Okay, what the hell’s so new about that?’

On one level not a lot. On another, it means I am going to be more selective about what I spend my time reading and reviewing and follow where things take me rather than what the latest hot book is. For example, I’d marked out a couple of books to read this week, but these plans were totally derailed when I stumbled across a second copy of Thomas McGuane’s 1972 novel, Ninety Two in the Shade. I read a couple of pages and was hooked.

Similar distractions pending, the following books are on to-read list in the coming month.

US writer Jordan Harper’s debut anthology, American Death Songs. I’ve read some of his short fiction work in Crime Factory, so I’m very keen to check out what else he has done.

Lee Marvin: Point Blank is a new bio of one of my favourite actors by US entertainment reporter Dwayne Epstein. I’ll be interviewing Epstein about his work in an upcoming issue of Crime Factory.

Blood of Paradise by David Corbett. A crime novel set in El Salvador, I’m reading this because a number of people have said it is similar to my own debut novel, Ghost Money.

Then again, by the time you read this, these plans could have all changed.