This is the second in a series featuring the character of Gerry Conway, a cynical newspaper journalist pounding the mean streets of Glasgow. In the first book, All the Colours of the Town, Conway is looking for a major story and finds it when he stumbles across evidence that a major Scottish political leader has had past connections to Irish loyalist paramilitaries. He pursues the tip and is soon immersed in the murky world of post-troubles Belfast. The story has added resonance because Conway is Catholic.

In Where Dead Men Go, Conway returns after taking an enforced break from journalism. Once the paper’s star journalist, Conway now finds himself playing second fiddle to his former protégé, crime reporter Martin Moir. He is thrown straight into the deep end when Moir goes missing just as a major underworld enforcer is found murdered. Moir’s body is the next to turn up. Was his death suicide or murder and why is there nearly thirty thousand pounds of unexplained money in a bank account under his name?

From here, the book is a reasonably straightforward procedural, as Conway tries to piece together the events around his friend’s death. Not only could it be linked to the murdered underworld enforcer, there may also be connections to the Commonwealth Games and the referendum on Scottish independence, both of which will take place in 2014.

Two things really elevated this book for me.

The first is the writing, which is just terrific. For example, this passage about Conway’s father:

“My father’s paper was the Tribune. Every night after tea, before he started his marking, my father sat down and with the Trib. He would vanish behind the big pages, the vast crackling sheets that only a grown man could manage. You didn’t interrupt him. I would watch him in the telly’s reflection, his arms spreading as he turned the pages, as though the paper were a set of chest expanders.”

Or this description of Glasgow:

“New Scotland, I thought. The early days of a better nation. But Glasgow’s civil war ground on, a city like a failing state. The regime controlled the centre and the West End, the good suburbs, the arterial routes. East and North were the badlands, the rebel redoubts, where the tribal warlords held their courts and sacrificed to their vengeful gods. The M8 was the city wall keeping out the barbarian hordes.”

Second are the descriptions of the dying world of newspapers. Where the Dead Men Go is as much about the dire future of quality newspapers, a situation very similar to that in Australia, as it is a crime novel, and Mcilvanney portrays this brilliantly. 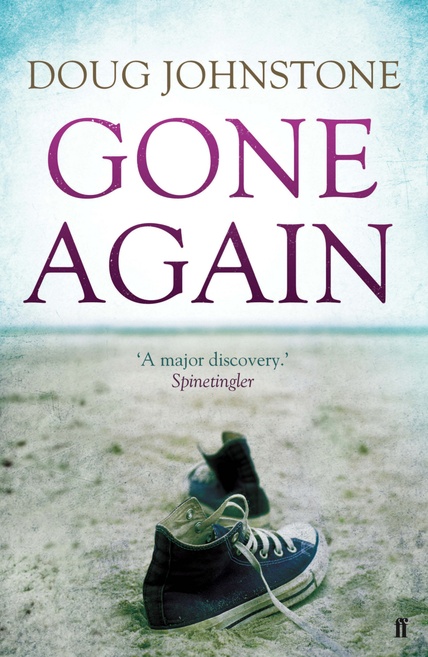 Gone Again is Johnstone’s fifth book. The story and the tone of the writing are very different to Mcilvanney. While Mcilvanney’s work is more akin to the thrillers of Ian Rankin, Johnstone is much more influenced by authors such as Irving Welsh and Alan Warner. His writing is fast paced and has a tense, claustrophobic feel to it.

The premise of Gone Again is deceptively simple. Freelance photographer Mark gets a call from his son’s school one afternoon, saying his wife has not appeared to pick up their son.

She has form in this regard, having disappeared for ten days without explanation after their son, Nathan, was born several years ago. When she doesn’t turn up that night or the next day, Mark’s fears about her safety begin mount.

It would spoil the book to go into too much more detail. Suffice to say, Johnstone milks the slow burn sense of frustration and anger on the part of Mark very effectively. It’s such a simple plot device, what would you do if you came home to find your wife/lover/mother gone? But in Johnstone’s hands, the story becomes razor sharp.

Psychological thrillers dealing with the personal/domestic consequences of a loved one going missing or dying in mysterious circumstances seem to be very popular at the moment. Most of the books in this sub-genre I’m aware of are written by women.

I really liked reading the story from a male perspective. How Mark deals with his emotions is not always pretty, in fact parts of the story are downright confronting. The scenes in which he tries to make sense of his wife’s disappearance for his young son, are particularly effective.

Where the Dead Men Go and Gone again are published by Faber and Faber and available in Australia through Allen and Unwin.