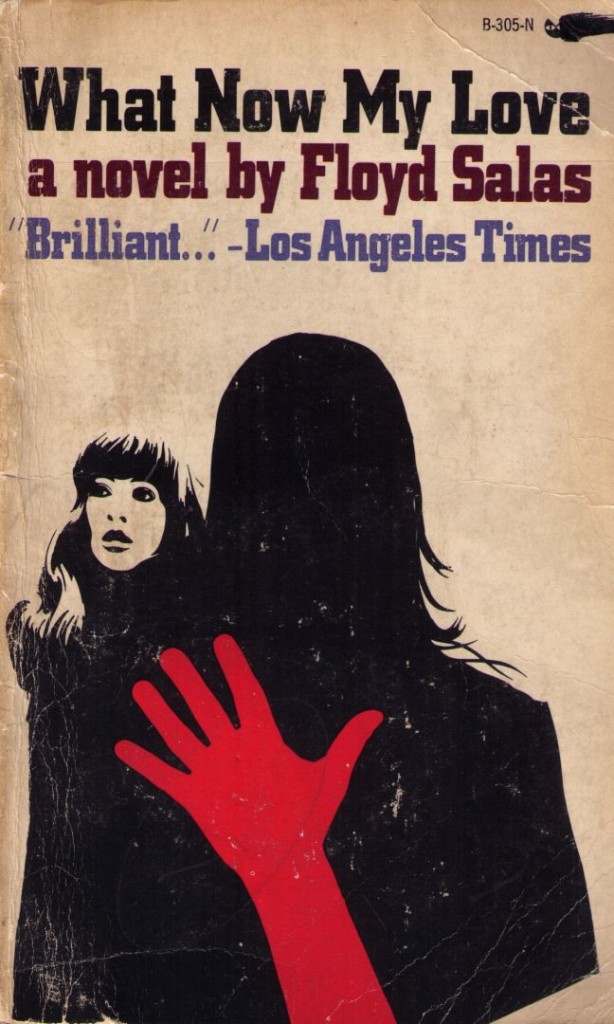 Fewer in number are pulp books written by people who were actually participants in the scene (whatever scene this may have been). These books fused pulp with a sense of real authenticity.

Blurring the line even further were mainstream or aspiring mainstream literary writers exploring counterculture themes in their writing. These books were often published by small or less prestigious literary publishers, because no one else would touch them, or by pulp paperback publishers, some times because the author thought getting their book out by any means was better than the manuscript languishing in a draw.

The writing in this category of books is usually far better than the average pulp novel. They could be called ‘literature’, except the themes they tackled are often exploitative or pulpy.

Where does What Now My Love fit?

The book opens with the narrator, Miles, and his girlfriend, Carole, visiting an acid factory in a house off San Francisco’s Haight Ashbury.

Carole is immediately seduced by the excitement of being in proximity to such a large amount of drugs. Miles just wants to score and get out. Although he lectures creating writing at one of the local universities, Miles is part Hispanic, comes from working class origins, got into academia via boxing scholarship. Unlike middle class Carole, he’s also brushed up against the law before. As he tells Carole:

“You’ve never been through this before, baby. I have. I tried to score some grass down in West Oakland one time when most of the college kids didn’t smoke it, and you had to go down to the underworld to get it.” He nearly gets busted, setting in train “a five year run from them up and down California and even down to Mexico City, where they didn’t let up, and tried to set me up every way they could, and finally got to my family through my brother-in-law, and finally even my wife, until there wasn’t a person in the whole world who didn’t try to help them bust me.”

The drug factory has psychedelic posters on the walls, the dealers are wearing Nehru shirts, and Herb Albert is on the record player. As evidenced by the surly bikie bodyguard in a cut off Levi denim jacket, there’s also a palpable feeling of paranoia. One of the dealers, Sam, is particularly cautious of the new arrivals.

As Miles puts it:

“I didn’t blame him for being uptight. The word went down Haight Street like the wind when somebody had a new stash of acid. There’d be pushers on every block, whispering the name of the new brand in your ear when you walked by, some big dealers giving away free samples, and the heat would be by in a few days at the latest. So he better be empty or clean by then or know everybody he sold to personally or he’d be busted within a week. I didn’t want to be around when it happened either, but couldn’t leave because instead of making her buy so we could split, Carole got hung up on the capping and was having so much fun making the illegal dope scene that she teased Sam by pretending to lick the powder off her fingers.”

Everyone is right to be paranoid, because the police raid the place, shots are fired, Miles ends up fleeing with Sam and Carole to Mexico. They cross the border without incident, but any hopes Miles has of getting to Mazatlan as quickly as possible are derailed by Sam and Carole’s desire to score drugs for the journey.

The second half of What Now My Love chronicles these efforts. Miles is already fearful of arrest and his paranoia only gets worse as they try and navigate the hellish world of pimps, hustlers, and US and Mexican undercover police, all of whom appear to be on the take. Class tensions and unresolved sexual frustrations increase with every misstep.

It is a well written book, with some great passages. A description of Miles and Carole having sex in the front of their car, as a Sam lies drunk and passed out in the back, is particularly evocative.

I’ve no idea how autobiographical the book is. Salas, who is still alive, was a writer and boxer who wrote several novels as well as poetry. He is also a ‘local Bay area identity’ in San Francisco in the period the book was written. You’ve got to figure there’s a fair chunk of his experience in it.

For my money, What Now My Love sits smack dab in the middle of the intersection between pulp and ‘literary’ writing I discussed earlier, which is one of the factors that makes it so interesting.

Grove Press is an American publishing imprint, best know for putting out alternative or edgy material with a high-end bent. They introduced a lot of the French existentialist writers to the US market and published Malcolm X and Frantz Fanon. They were also involved in some high profile censorship fights over books such as Lady Chatterley’s Lover and the Naked Lunch.

Thanks to crime writer and Macquarie University academic Peter Doyle for alerting me to the book.