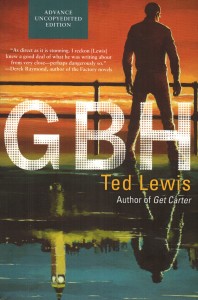 Then someone starts undermining his organisation from within. People disappear, bodies start to turn up. Fowler gets increasingly paranoid, doesn’t know who to trust, which leads him to take revenge on those members of his ‘Firm’ he believes might be betraying him, with terrible consequences.

These parts of the story, set in the past, are interspersed with chapters set in the present in which Fowler is cooling his heels in a small English beach town, biding his time, or so he thinks, until he can regain what is left of his empire. These scenes have an air of complete unreality about them as Fowler, by now a hopeless alcoholic (much like Lewis in the closing years of his life), gradually sinks deeper into a paranoid funk.

I’ll leave it to others to make the judgement call as to whether GBH is ‘a noir masterpiece’, as it has been referred to. What is fascinating about the book is how Lewis simply refuses to compromise on just how repellent Fowler is. So much crime fiction these days features main characters that are little messed up in a sort of boutique way, nothing too serious, just something to give them an edge, something they are usually hugely regretful about. Fowler is a vicious, brutal, calculating criminal who made his fortune through terrible means and whose only regret is that he lost it through hubris and poor business decisions and now wants it back. Badly.

I’m certainly not saying crime fiction needs to be gratuitous or even ‘noir’ (whatever that means) to be authentic or good. But I also find the opposite, the preponderance of politically correct, socially acceptable characters, equally wanting.

I recently wrote a lengthy piece about the re-release of the Jack Carter trilogy, Jack’s Return Home, Jack Carters’ Law and Jack Carter and the Mafia Pigeon, for the Los Angeles Review of Books (which you can read in full here) in which I touched on Lewis’s life. Nine books, of which Jack’s Return Home saw him achieve a degree of fame never matched by any of his subsequent novels. He sunk into alcoholism and died at the age of just 42. Lewis was, by all accounts, a talented, charming but unpleasant individual, especially when he’d been drinking. While he was not deeply enmeshed in the underworld, he would have amassed some other fairly unsavoury links in the after hours drinking clubs he frequented, and with these, knowledge of some dark deeds.

I found it impossible to read GBH without thinking about how much of it was art imitating life. The loss of fame, the drinking, the mental anguish, it doesn’t take much imagination to see the book as a coda on Lewis’s brief life and incredible contribution to crime fiction.

GBH won’t be to everyone’s taste, but if well written, unapologetic, hard boiled crime crime fiction with a very dark edge is your thing this book is definitely worth your time.