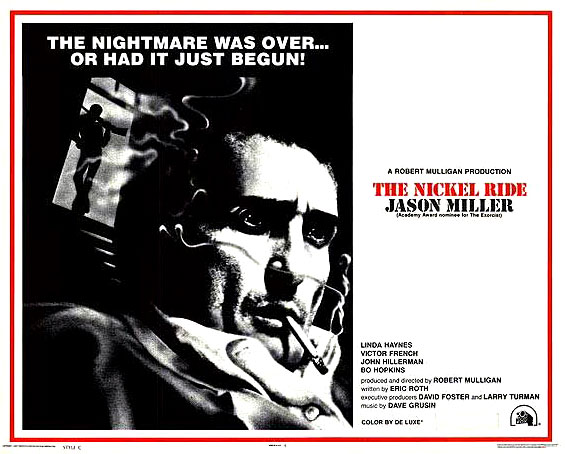 Cooper’s immediate boss, Carl (John Hillerman, instantly recognisable as Higgins in Magnum PI), is getting skittish and assigns Turner (Bo Hopkins), a cocky cowboy enforcer, to shadow him. Carl insists Turner is only hanging around to learn the basics of the business, but Cooper, already unsettled by his inability to close the deal of new storage space, gets paranoid and starts to think Turner may have been sent to kill him.

The similarities between The Nickel Ride and Inherent Vice are twofold. The first is the look, the monochromatic photography, by turns murky and washed out, which places it squarely as a product of the early seventies. The second is the slow, at times dream like pacing and discursive story telling style, another key signature feature of early seventies US crime cinema. Robert Mulligan, whose directorial credits included To Kill A Mockingbird (1962), Inside Daisy Clover (1965) and the undervalued Baby the Rain Must Fall (1965), and his screenwriter Eric Roth, keep the interactions low key and don’t reveal a lot of context about the characters and what is going on.

The film The Nickel Ride is most often compared to is the 1973 classic, The Friends of Eddie Coyle (which I reviewed on this site in detail here). Both films are about ageing, low level mob figures who have lost their taste for the criminal world and, as a result, find themselves having to fight for survival against younger, hungrier, up and comers.

Like The Friends of Eddie Coyle, The Nickel Ride is also a great film about the mechanics of crime, endless meetings in bars and greasy spoon cafes, putting together deals which work or don’t, smoothing rumpled egos and solving disputes. Cooper is like any other mid-level employee working for a big company. His anonymous bosses are only concerned with squeezing everything they can from him and if he’s not prepared to put in more, they’ll replace him without a second thought.

Miller is terrific as Cooper, increasingly disillusioned and retreating back into memories of his younger years pulling cons on the carnival circuit (hence the film’s title). The one joy in his life is Sarah, his ex-dancer girlfriend, a strong performance by Linda Haynes, who starred in a number of US exploitation films in the seventies and eighties, most prominent of which was the post-Vietnam revenge film, Rolling Thunder. Hillerman is also good as Cooper’s middle manager, Carl, who is conflicted between protecting his own future and looking after his employee, with whom he has had a long association. The conversations in which Cooper and Carl try and decipher the shifting dynamics of what their mob bosses want are priceless.