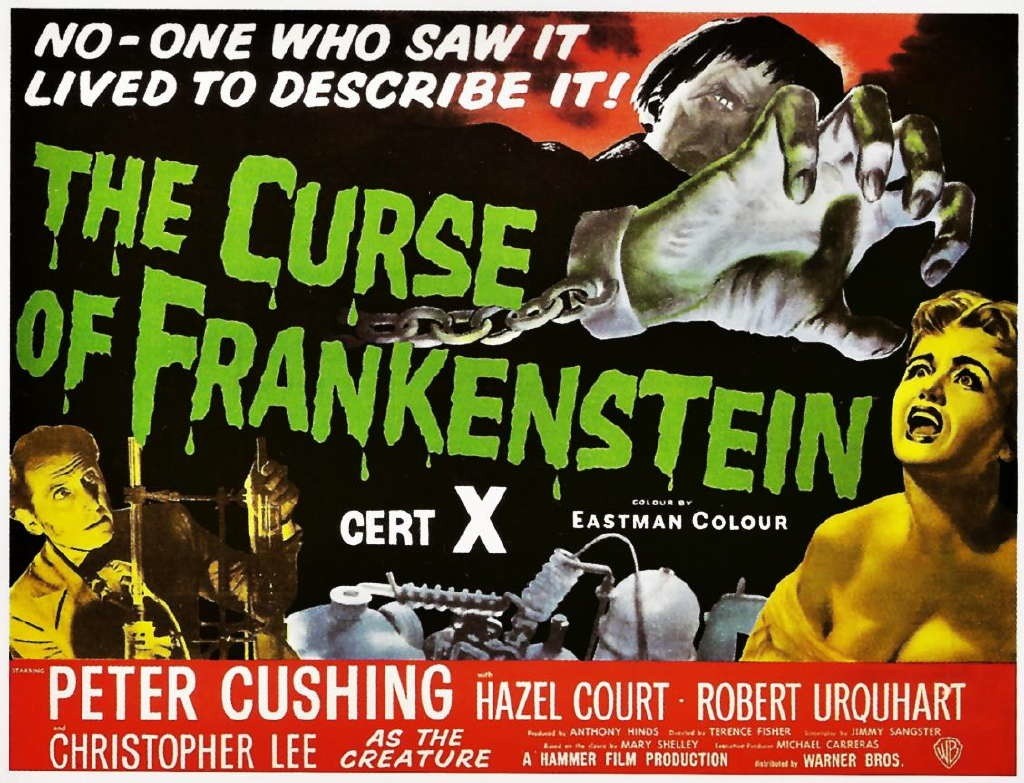 The film begins with a priest visiting Baron Victor Frankenstein (Peter Cushing) in the cell where the scientist is waiting to be guillotined for his crimes. Via flashbacks, director Terence Fisher establishes the Baron as a brilliant young man who, with the help of his tutor, Paul Krempe (Robert Urquhart), begins a series of experiments aimed at restoring life to dead tissue. They successfully bring a dead puppy back to life. Krempe wants to halt the experiments there, but Frankenstein has bigger plans. He wants to bring dead human flesh to life and steals body parts, including the brain of an eminent scientist who the Baron invites to dinner at his mansion and casually murders, to make the creature, played by Lee.

The film only very vaguely utilises the plot of Mary Shelley’s book, Frankenstein. Indeed, one of the most interesting aspects of the movie, which Harmes write about, is how it inverts the story so that the scientist is the real monster. Another wonderful aspect of the film is the way the narrative moves between ‘the duel worlds the Baron inhabits, the respectable world of the downstairs which he shares with his fiancée and polite society, and the upstairs world of bio-mechanical science filled with acid and infernal machinery.’

The Curse of Frankenstein was a cinema sensation on its release, almost in inverse proportion to the condemnation piled on it by censors and reviewers. It was given an X certificate, a mark of degeneracy in England at the time, and attacked by everyone from the film critic of The Daily Worker to Sight and Sound, which accused the film of presenting details ‘immediately reminiscent of concentration camp atrocities’. 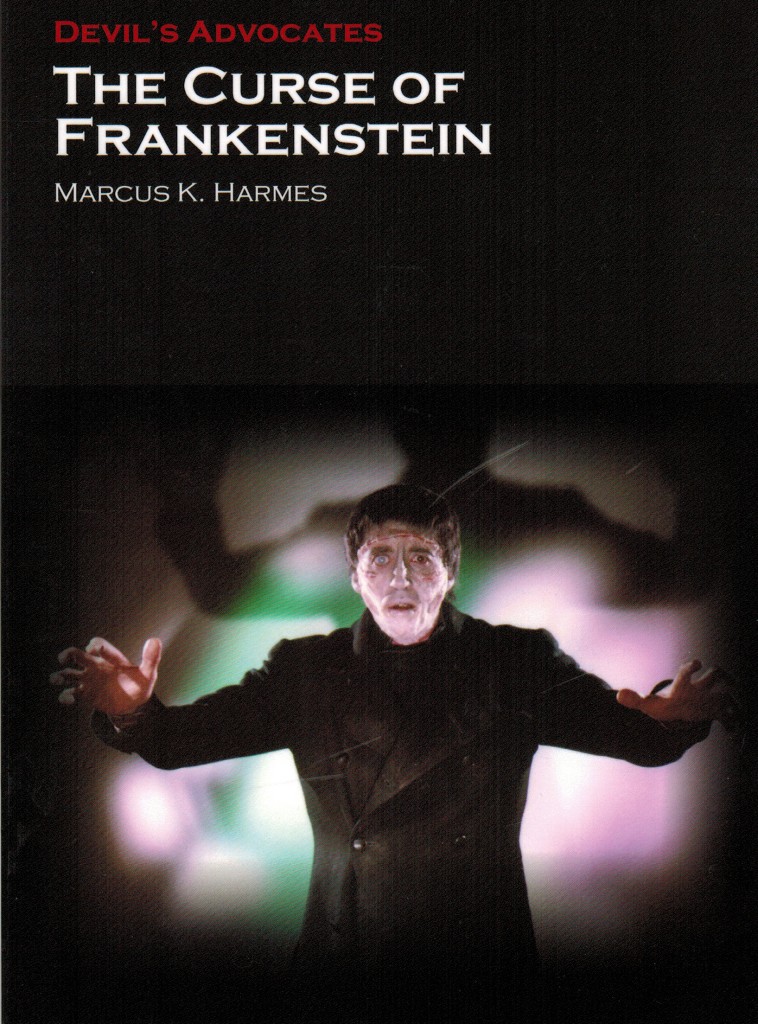 Harmes notes the impact of the X certificate on another British director, Michael Powell and his 1960 psychological horror, Peeping Tom, about a film crew’s focus puller who murders women and voyeuristically watches footage he has shot of their death throws. The moral outrage in that case effectively killed Powell’s career. Fisher not only survived the controversy his film generated, his career thrived and The Curse of Frankenstein was hugely profitable. While the film is tame by the standards of the torture porn aesthete of so many contemporary horror films, it’s easy to see how it must have shocked audiences at the time. The creature looks nothing like the one in James Whales’ 1931 Universal Pictures feature. Universal had threatened to sure Hammer in the event that they reproduced any aspect of the original film, hence the British had to come up with their own version of the monster.

They did a remarkably good job. Lee’s make up looks hideous, much more like an amalgam of butchered body parts than did the original 1931 monster. Hammer’s creature is also unambiguously homicidal in nature. The monster escapes into the nearby woods and murders a passing hunter and his child. Krempe and Frankenstein pursue the monster and Krempe shoots it in the head and kills it. They bury it, but, undeterred, the Baron returns that night, digs it up and again breathes new life into the creature’s dead flesh, after which the it appears even more mangled and damaged.

Murder, theft of body parts, a horrific monster, The Curse of Frankenstein had this and more, all filmed in glorious Kodak Eastman colour, a colour stock that was cheap but gave the director a wonderfully lurid colour palette, at a time when most British films were still being made in black and white.

No doubt the censors and mainstream critics were also incensed by the morality of Cushing’s Frankenstein. The Baron is not only a scientifically corrupt murderer, he is depicted as a louche, debauched upper class nobleman. He states his intention to marry Elizabeth (Hazel Court), while carrying on an affair with his servant girl, Justine (Valarie Gaunt). In a scene still shocking today, when Justine informs the Baron she is pregnant and threatens to reveal their relationship to Elizabeth, Frankenstein locks her in his laboratory with the creature, which kills her.

There had been a limited crop of horror films produced in the UK prior to The Curse of Frankenstein. As Harmes’ discusses The Curse of Frankenstein was influenced by these as well as the broader body of British gothic literature. Nonetheless, the film is best remembered for opening the floodgates to a wave of British horror cinema. It was the first of Hammer’s gothic horror series, which would include a further five Frankenstein films of differing quality, and, according to Hermes, the beginning of a veiled re-appropriation of Britain’s cultural heritage of Gothic horror which had, until that time being dominated by American film makers. It was also the first film to team Cushing, Lee and Fisher.

The Curse of Frankenstein by Marcus K Harmes is one of a number of excellent books in the Devil’s Advocates series, including Alexandra Heller-Nicholas’s book on Dario Argento’s Suspiria and Ian Cooper’s Witchfinder General, all of which are available at here.