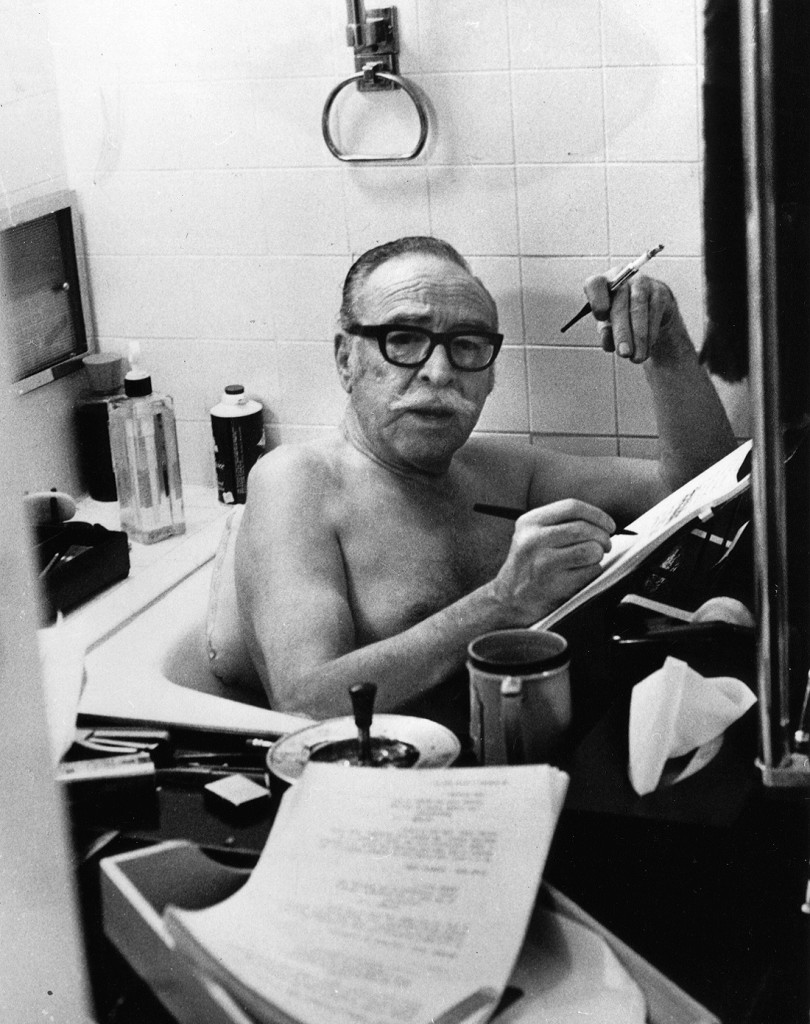 Based on Dalton Trumbo, a biography by Bruce Cook, the film is roughly split into two parts. The first deals with the events leading up to and around the House of Un-American Activities Committee hearings into communist influence in Hollywood. Trumbo, played well enough by Bryan Cranston, is a novelist turned screenwriter and one of many high profile members of the Hollywood movie community swept up in the hysteria around the hearings. A former Communist Party member and fellow traveler, he is also unashamedly rich as a result of his writing, the ‘swimming pool socialist’ as he is referred to at one point in the film. Trumbo’s politics are interesting in the light of claims I have read that the film, which took eight years to make, was a hard sell because its main subject was too left wing. Called to testify before Committee he resisted considerable pressure to name other fellow travelers and, as result, was black listed from working in Hollywood and given an eleven-month jail sentence for contempt of Congress.

The second half focuses on his post jail career. Prevented from writing under his own name, Trumbo did script work under other pseudonyms, mainly for poverty row moguls, King Brothers Productions. Much of this work Trumbo farmed out to other writers on the black list. During this time he won two Oscars for scripts that appear under other names, the 1953 romantic comedy Roman Holiday, and the 1956 drama Brave One. As rumours about who actually wrote these movies circulated throughout Hollywood, Trumbo was offered scripts for Otto Preminger’s Exodus, based on the Leon Uris novel of the same name tabout the creation of the state of Israel, and the what would be become the 1960 Stanley Kubrick film, Spartacus, starring Kirk Douglas. In particular, it was Preminger’s decision to publicly credit Trumbo with the Exodus script, a move which reluctantly led Douglas to do the same on Spartacus, that effectively broke the back of the blacklist and lead to Trumbo’s public rehabilitation.

The HUAC scenes are a lacklustre affair. This might be because the story has already been told so many times. But I suspect it has more to do with the very narrow focus on a group of reasonably well to do scriptwriters and actors, rather than taking in the broader sweep and impact of the Red Scare. Helen Mirren is excellent as the vindictive Red baiting actress turned right wing newspaper gossip columnist, Hedder Hopper, who played a key role in driving the black list. There’s also some interesting background concerning Trumbo’s dealing with another fellow traveler, Edward G Robinson (Michael Stuhlbarg). Unlike Trumbo, Robinson, did name names, including Trumbo, an act that saved his career but left him with lingering existential angst.

The film passes over Trumbo’s time in prison fairly quickly and, strangely, omits any mention of the fact that after his release he moved to Mexico with his family for two years. Instead, the starting point of his post-jail life is a meeting with Frank King (a scene stealing performance by John Goodman). Already Hollywood pariahs due to the quick and dirty nature of their film output, the King brothers didn’t give a damn about Trumbo’s past or his politics, only his ability to knock out a script quickly. Working for the Kings involved a punishing writing schedule, most of which it appears Trumbo did in the bath, half cut on whiskey and with the help of Benzedrine.

The glimpse into the world of B-film making, how it worked and the position of the King brothers in the Hollywood film making hierarchy, is fascinating. Trump wrote a lot of crap for the King brothers. But in addition to the Oscar winning Brave One, his output also included what is now considered a film noir classic, Gun Crazy (1950) and another excellent noir directed by Joseph Losey, another blacklistee, The Prowler (1951).

The main focus of the second half of the film is on Trumbo’s strained relationship with his long-suffering wife, Cleo (Diane Lane) and children. It’s not that Trumbo’s relationship with his family isn’t worthy of screen time but the way it is handled merely consists of one dimensional hand wringing scenes the point of which seems to be to illustrate that behind every successful artist is long suffering family. Trumbo’s post-HUAC relationship with those members of the Hollywood community who did name names – another potentially fertile area of investigation – is dealt with but given reasonably short shift.

Trumbo could’ve been a gripping film about the Red Scare. Alternatively, it could’ve delved into the process of script writing and the fraught but symbiotic relationship between mainstream Hollywood and its B-movie side. As part of this, it could have examined the neglected fact that major studio heads were more than happy to go along with HUAC, not only out any sense of patriotism, real or feigned, but because it severely weakened the unions and upended power relations in the industry in favour of management.

The doesn’t really deal with any of these themes very well. Biopics these days tend to go in one of two directions. The better ones take a revisionist stance, mining a little known or controversial aspect of their subject’s history to illuminate a wider reality or hidden truth; or they tell the story straight with few flourishes and leave little to the imagination. Trumbo is very much in the former camp. If you are interested in this period of Hollywood history, Trumbo certainly has enough to engage you, but the overall effect is akin to watching a made for television documentary. No doubt Trumbo would have written it better.

Trumbo is in cinemas February 18.