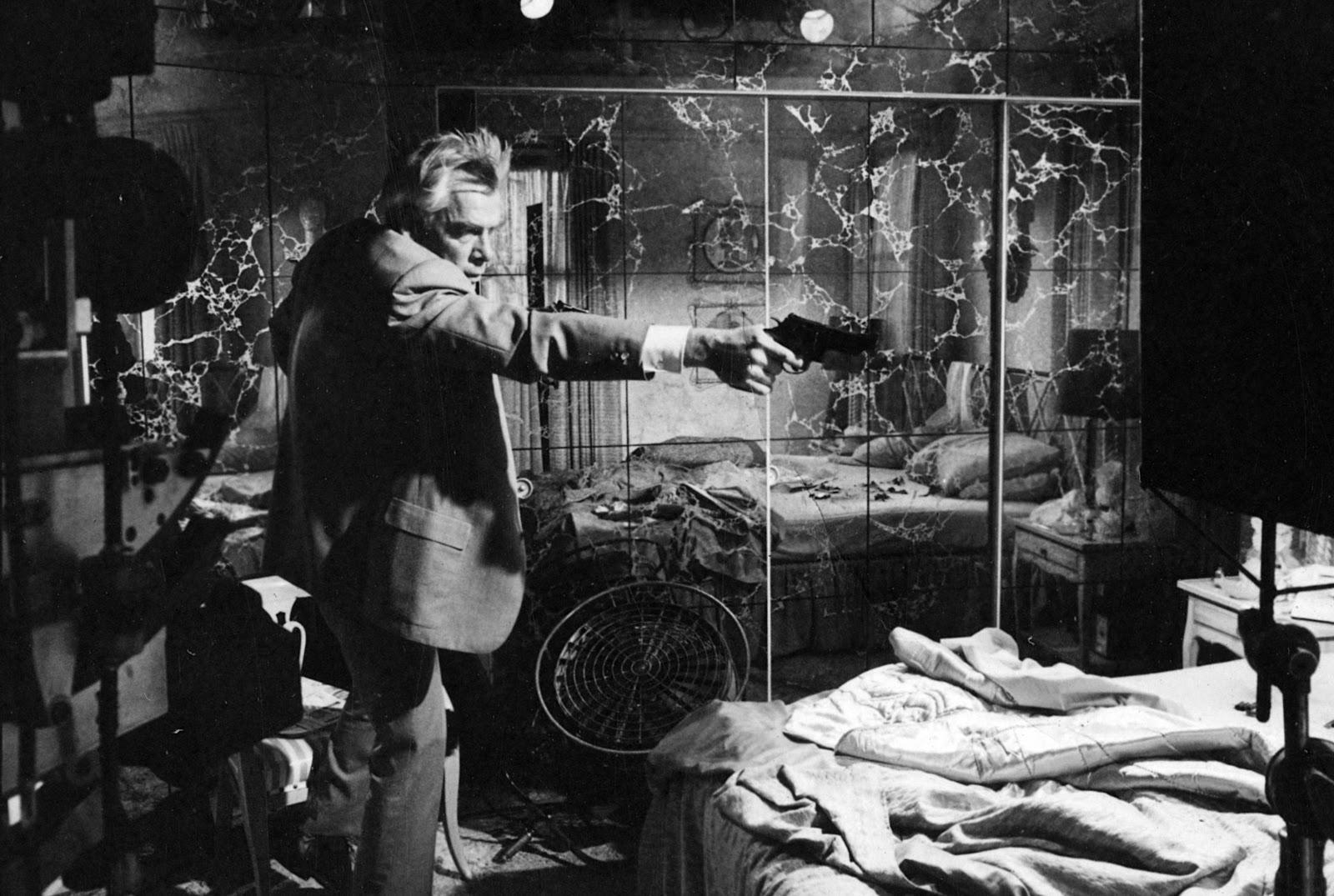 Point Blank was loosely based the 1962 novel, The Hunter, the first in the series of books by the late Donald Westlake, writing as Richard Stark, about the master thief, Parker. It opens with Walker, as the Parker character is called, played by Lee Marvin, double-crossed and left for dead by his friend, Mal (John Vernon), and wife, Lynne (Sharon Acker), with whom Mal was having an affair, after the three of them have heisted a regular money drop on the prison island of Alcatraz by a powerful criminal network, the Organisation. Walker, somehow, survives his wounds and manages to get off the island. He reappears and proceeds to tear Organisation apart to find Mal and get his share from the heist, the amount of $94,000. He is assisted by a mysterious man, Yorst (Keenan Wynn), who at first comes across as a cop, but is eventually revealed as a senior member of the Organisation, who sees in Walker a means to eliminate his internal competitors.

Point Blank rehabilitated the America crime film, which, with a few exceptions – Allen Barron’s Blast of Silence and Sam Fuller’s Underworld USA (both of which appeared in 1961), Orson Welles’ Touch of Evil (1958) and Robert Wise’s Odds Against Tomorrow (1959), with its daring racial politics – had been moribund since film noir petered out in the mid 1950s.

Point Blank benefited enormously from having a non-American as director. It was Boorman’s first Hollywood film and Marvin, then a major star, had approval on the script, casting and final cut, all of which he ceded to the Englishman. Added to this, the mainstream studio system was in crisis, unsure how to deal with changing audience tastes and the emerging counter culture, and MGM was prepared to take a risk. Boorman used his creative freedom to infuse the film with a unique mix of influences, including European new wave cinema. The result is a crime film stylistically very different from others before it. This includes its fragmented narrative and use of flashbacks, the way Boorman utilises colour and texture to create mood, and the soundtrack.

Boorman catches a garish, alienated alternative reality to the soon to be Summer of Love US west coast. Corruption is everywhere and everyone has to make their own accommodation with the Organisation, a prototype of the ravenous corporation. The only 1960s American crime movie before Point Blank I can think of that is similar in style and tone is Arthur Penn’s little seen stylish black and white new wave influenced effort, Mickey One, which featured Warren Beatty as a stand up comedian on the run from the mob for a infraction, the exact nature of which he is unclear about.

Donald Zec’s 1979 book, Marvin: The Story of Lee Marvin, discusses how the film was a risky career move for Marvin, given its subject matter. While critics generally lauded his performance, many where turned off by the film’s violence. Point Blank opens with Mal’s cold-blooded shooting of Walker. It goes onto show Walker throwing a naked Mal from the balcony of Mal’s penthouse apartment, the camera pausing on his body in a pool of blood on the pavement, a brutal fight in the nightclub amid throbbing rock music and a pulsating psychedelic light show, and the use of a car to batter information from a mid-level Organisation functionary.

I suspect the film was a financial success, in spite of what the critics said, not only due to Marvin’s box office pull, but because its violence reflected the times. America had assassinated one president, and his brother and Martin Luther King would be a shot dead a year later. Cities across the country were wracked by racial strife and there was looming domestic discord over the war in Vietnam, images of which were beamed into lounge rooms across America nightly. Audiences were more accepting of big screen violence (Penn’s ground-breaking Bonnie and Clyde was released the same year), a trend Marvin’s career rode. In his 2012 biography of the star, Dwayne Epstein writes that Marvin’s persona ‘cemented the most purposeful and consistent portrayal of man’s violent and primal inner demons in the history of modern cinema’. Point Blank was a crucial component in creating this identity.

It is also important to note that while Point Blank is violent, for the most part this doesn’t feel gratuitous. Note Lynne’s horror when Mal shoots her husband and, later, the way Walker bursts into her apartment, unloading his pistol into her mattress. Maybe Walker thought Mal or another lover would be lying there. I suspect more is the case that Walker is so full of rage and frustration, he has to take it out somehow. It is an incredible scene, no matter how many times I have seen it. In my most recent viewing, I also noticed how quickly a circle of onlookers assemble around Mal’s fallen body. These include couple of teenage girls teens, the look on their faces say the death is a welcome break in their otherwise monotonous existence.

Acker, Vernon, Wynn, Carol O’Connor (who would go onto a achieve mainstream fame as Archie Bunker) as Brewster and Lloyd Bochner as Carter, two senior members of the Organisation’s machine, are all excellent. But this film belongs to Marvin and his co-star, Angie Dickinson. Dickinson is Chris, Lynne’s sister, who has her own score to settle with the Organisation for their murder of her musician boyfriend and take over of his jazz club, which she now reluctantly manages. She is equal parts attracted to and repelled by Walker, his mercenary nature and the violence he routinely dishes out. She allows herself to be used briefly as bait so that Mal will lower his guard, but loathes herself and Walker for it. There is the palpable sense that this is just one of many ways Chris has had to emotionally or physically compromise herself to survive and the scene where she beats her fists against an unresponsive Walker in fury at everything she has gone through until she collapses exhausted, is stunning.

As is the case with most of Lee Marvin’s work, his performance contains no sense of pretence or method acting. Walker’s various reactions, confusion, anger, determination, play across Marvin’s craggy face and feel real, not surprising given Marvin drew heavily on his own experiences and inner demons, including his World War II experience, which culminated in him being wounded in the charnel house that was the battle for Saipan, for the role.

Point Blank is most obviously viewed as a straight revenge noir, an extension of Marvin’s role as the hitman Strom in Don Siegel’s 1964 version of The Killers and numerous other bad guy roles. But the film’s fragmented, unreliable, at times almost dreamlike, narrative has led some critics to speculate Point Blank is a ghost story or that Marvin imagines everything while lying mortally wounded in the cell on Alcatraz.

Boorman has never confirmed or denied his intentions in this regard, but successive viewings have opened to me up to interpreting the film as a feverish revenge dream on the part of the dying Walker. This reading is supported from the very opening scene, the ghostly swirling coloured lights on Marvin’s face. The first time we see Marvin after he has supposedly escaped from Alcatraz, he is on a tourist cruise around the former prison colony, while a guide intones over the loudspeaker that no prisoner ever got off the island alive. It is further encouraged by the way Lynne goes about her daily life while Walker strides down an LAX tunnel like a wrathful spirit, and her monologue recounting of the events leading up to her betrayal to Walker, who sits silently next to her, almost as though he does not exist. Walker displays no emotion as he examines Lynne’s body after she has killed herself with an overdose of sleeping pills. Then her body is gone (although the singed bullet holes Walker put in the mattress remain). At the end of the film, Walker dissolves back into the shadows, as if he was never there to begin with.

In Epstein’s book, Dickinson talks about the creative tension on the Point Blank set, particularly between Marvin and Boorman, their constant working and re-working the idea and the script. The challenge they set themselves, ‘to create a unique version of noir, a sort of art house action film.’ They succeeded and 50 years on it remains a vital film in the canon of American crime cinema.