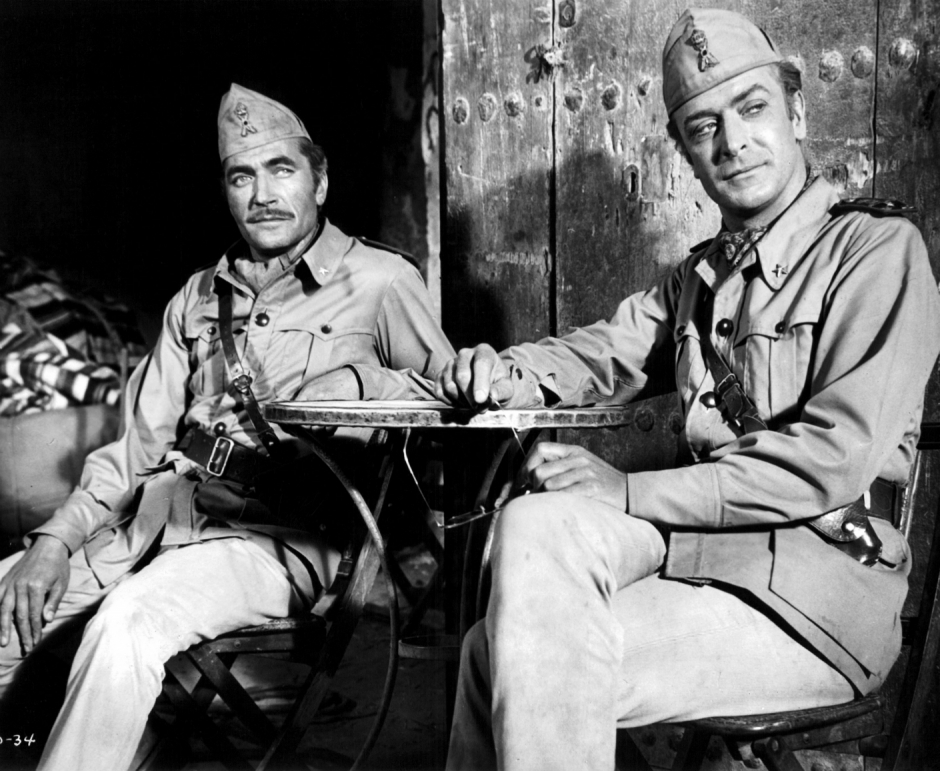 Set on the North African front during World War II, I reckon Play Dirty is up there with the most hard-boiled and cynical of them. Plus January 1 was the 50th anniversary of its release, a milestone that went totally unmentioned anywhere, so the time is right to give it a bit of love.

The men masters’ assembles are a sleazy, vicious bunch of ex-prisoners, a mixed British/Arab selection of the detritus of London’s various imperial adventures in the Middle East. As Masters explains at one point: “War is a criminal enterprise. I fight it with criminals.” The force is technically headed up by Captain Douglas (Michael Caine at his insouciant best), a loush Englishman who has been seconded from British Petroleum for his knowledge of oil pipelines. But the real commander is Captain Leech, a wonderful turn by Nigel Davenport as a ruthless son of a ruling class family who has fallen from grace (and who only agrees to go along and act as second in command after Masters offers him two thousand pounds to bring Douglas back alive).

In a piece of breathtaking bastardry, Blore palms off the mission as his own idea and sends a unit of regular British troops off after the commando unit, effectively using the commandos as an advance force to clear the way – and take the casualties.

Dressed as Italian troops Douglas and his men have to deal with dust storms, mechanical problems, Nazi aligned Arab tribesmen, and landmines. Their radio equipment is destroyed cutting them off, and there are lot of arguments about whether they have the time to bury the various corpses that pile up along the way. At one point they shanghai a Nazi ambulance and its nurse to deal with one of their wounded, which also serves to shoehorn some nasty sexual tension into the proceedings. They also narrowly avoid a battle with a unit of German soldiers by letting Blore’s regular forces stumble across them instead, with lethal consequences for the latter. The piece de resistance comes when, unknown to Douglas and his men, Masters is informed that due to a surprise break through by British forces, the allies actually need the petrol. Unable to contact his force to call the mission off, Masters is forced to betray them to the Germans.

Despite making some terrific films, including House of Wax, and one of my favourite B-noirs, Crime Wave (which I reviewed here) both of which appeared in 1953, and the stunning 1959 Western, Day of the Outlaw (I won’t go into details but I think this is one of the best Westerns made), De Toth’s career never really seemed to take off in Hollywood and Play Dirty was the last film he was credited with directing in a career that stretched back to the late 1930s. I don’t know why. Whatever the case, Play Dirty exhibits the same traits as those films: a tight, less is more, story telling style and wonderful economy in terms of the use of imagery. The location, Spain standing for North Africa, also works well.

I have seen online commentary that this film was directly influenced by Robert Aldrich’s The Dirty Dozen, which appeared in 1967. There are a number of direct parallels between the two, most obviously the fact that both involve a mission behind enemy lines undertaken by a group of ex-prisoners. However, I seriously think Play Dirty is as good if not better than The Dirty Dozen, if only for the fact that it is a British production and hence dishes out the cynicism and class politics in way even the toughest American film would find difficult. This tone is epitomised by Caine and Davenport as two men whose only commonality is that they want to get out of the increasingly disastrous situation they find themselves in.

And if you don’t believe me, watch the ending, the only part of the film I won’t give away here.