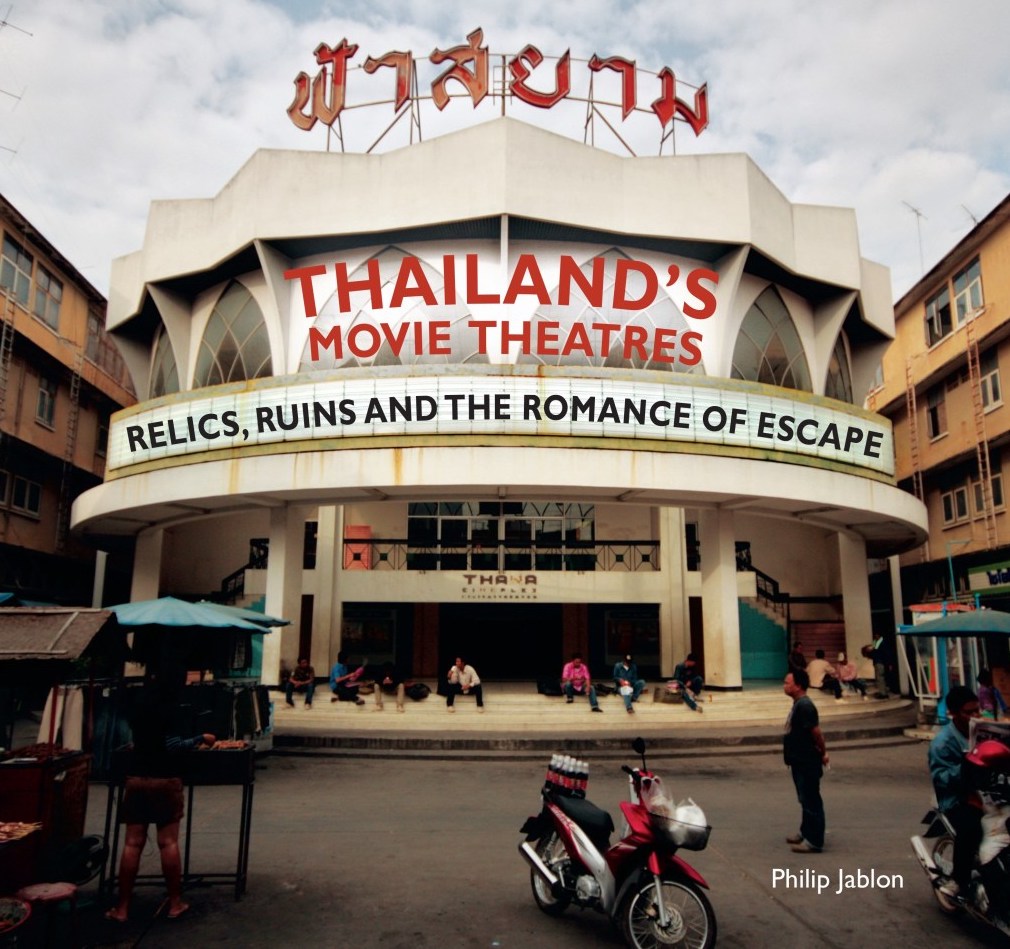 The first stand-alone cinema was established in Thailand in 1905. They proliferated rapidly, with the country boasting as many as 700 at the industry’s peak. Often established by local entrepreneurs, these movie theatres were usually a dynamic part of their community and deeply enmeshed in their economic and social life.

Running parallel with rapid industrialisation, the major boom period of the stand-alone cinema in Thailand was 1961 to 1981.Thailand was the recipient of major investment from the US and Japan, in part aimed at turning it into a bulwark against its newly communist neighbours, Laos and Cambodia, to the east. Thailand was also a major market for Hollywood product, as well as films from India, Hong Kong and Europe, and local Thai industry (of which criminally little of substance has been written).

One of the most interesting aspects of these stand-along movie houses is their architectural diversity. Many feature striking modernist design, including ornate grill and lattice work, large floating staircases, high domed roofs, large open-air pavilions and ornate arches; others have a boxier, brutalist design.

Thailand’s stand alone cinemas took their first big hit in the second half of the 1980s with the gradual electrification of rural areas and the introduction of home entertainment systems (owning a television was still rare throughout much of country until that time). It was then buffeted by the rise of the multiplex and the shift from 35mm to the digital in the 1990s, and, more recently, the explosion in real estate prices, particularly in major urban areas. This latter development has seen virtually all those few cinemas that survived into the 2000s, sold and replaced by shopping centres, parking lots and condos

There are now just a couple left in operation, of which the major one is the magnificent Scala Theatre in downtown Bangkok. The fate of this cinema, which has operated since 1969, hangs precariously in the balance. Enthusiastic supporter are attempting to convince the owner, nearby Chulalonkorn University, the building is a vital part of the city’s cultural history, and should not be sold off for redevelopment. But the forces of architectural and historical preservation do not run deep in Thailand.

Jablon has, quite literally, traversed the length and breadth of Thailand, photographing these cinemas, from Bangkok to the most remote rural town. Some he got to while they still operated and text and pictures of these come with a postscript as to their fate. Some he finds repurposed or demolished. Others just sit there, abandoned monuments to a bygone era. It is the images of these buildings that are the most haunting. Often architecturally stunning, these are left to bake in the sun, ‘weathered, soot stained and forgotten’, rows of empty dusty chairs, roofs full of gaping holes, old posters still in their display frames.

In addition to a stunning collection of memorabilia, ticket stubs, posters and promotion material, the book includes fascinating sections on Thai film poster painters, the projectionists, and the film dubbers – live dubbing being a key part of the Thai cinema experience until the early 1970s.

This book could so easily be about the demise of the stand-alone movie theatre in any country in the world, and certainly in any country in South East Asia. But the Thai setting evoked a particularly bittersweet note for me. I worked as a journalist in the Mekong region – Laos, Vietnam and Cambodia – for much of the 1990s. I visited Bangkok many times, on visa runs and R&R breaks, and lived there in 1996. Many afternoons and evenings were spent in one of the now gone Bangkok theatres featured in Jablon’s book, as I nursed a hangover or tried to escape the incredible heat or monsoon storms, or just  wanted to pass time by watching a film – American psychological thrillers like Basic Instinct (1992), Color of Night (1994) and Primal Fear (1996), heavily censored, seems to be particular favourites with Thai cinema goers in that decade.

And the same forces at play in Thailand have also put a wrecking ball through stand-alone film theatre culture in my home city of Melbourne. Read this book with a sense of joy and sadness at what once was and will never again be again. Then, if you’re lucky enough to have a stand-alone cinema near where you live, go and watch a film there.