Posted on November 14, 2010 by Andrew Nette| Leave a comment 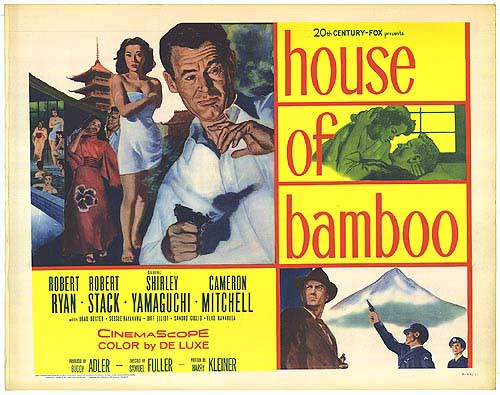 Sam Fuller’s 1955 movie House of Bamboo isn’t one of the greatest film noirs ever made but it’s in there for one of the most interesting, and despite its flaws I have found myself watching it over again.

All the elements associated with Fuller’s style are on display, his ambiguous politics, break-neck story telling style and pulp sensibility, overlayed on this occasion with an oriental aesthete that veers between homage and cliché.

Fuller throws the viewer straight into the action, a precision heist of a US supply train as it speeds through the Japanese countryside by a gang of men dressed in traditional peasant garb, the magnificent snow-covered peak of Mount Fuji in the background.

They dispatch the crew without hesitation and unload the cargo into a waiting truck. Because the train was carrying small arms and ammunition and because one of the guards killed was a Sergeant in the United States military, the heat is on the local police to doing something.

We move quickly to the aftermath of another robbery. One of the assailants, Webber, lies squirming on a hospital-operating table. Wounded by police, he was left for dead after one of his own crew pumped three bullets into him before they escaped, the same bullets used in the train robbery.… Read more