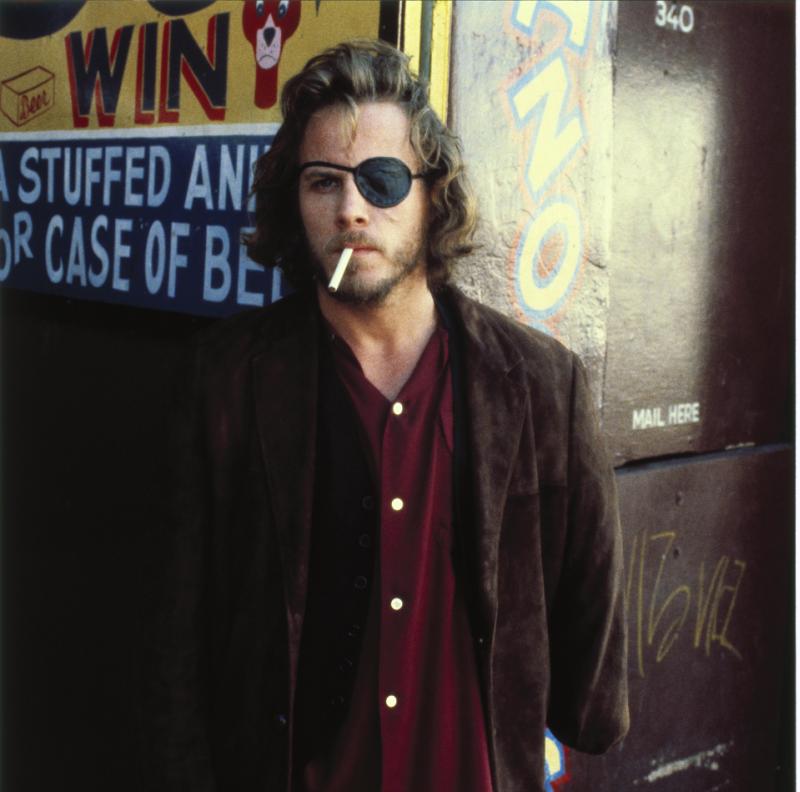 Richard Bone (Jeff Bridges), a part-time gigolo and boat salesman, is returning from a late night assignation when his beat-up car stalls in an alleyway. Another vehicle pulls up behind him and in the heavy rain and headlight glare we see a man get out and throw something into a nearby rubbish bin. The car speeds off, nearly hitting Bone in the process. As he walks off in disgust, the camera pauses on a stilettoed female foot protruding from the bin.

Bone returns to the Santa Barbara house he shares with Cutter (John Heard) and his wife, Mo (Lisa Eichhorn). Mo is a sharp-tongued alcoholic. Cutter has a face full of scar tissue, only one arm and a permanent limp from his tour in Vietnam. He’s a ball of barely contained bitterness and fury.

Next morning garbage men find the young woman’s body. Of course the fact that Bone’s car is parked nearby makes him a suspect and the cops bring him in for questioning.

They attempt to sweat a confession out of him, going into how the victim died (badly), even wheeling in her sister, Valerie, to try and guilt trip him in admitting to the crime. However, in the face Bone’s protestations all he could see through the rain was a dark shape in sunglasses, the cops are forced to kick him loose.

Later, pausing with Mo and Cutter to watch a passing parade in celebration of Santa Barbara’s Spanish heritage, Bone thinks he sees the man who might have been the one dumping the body. He’s shocked when Cutter informs him the person he’s fingered is J.J. Cord, a local business big shot.

Cutter slowly starts to put together pieces of evidence linking Cord to the crime. Cord’s burnt out car was discovered in another location on the same night as the woman was murdered. The last place she was seen was a disco across the road from a hotel function attended by the businessman, “a little reception for some oil people”.

While these are at best circumstantial, to Cutter they are evidence of a much greater conspiracy, or at least an opportunity to make money – we’re not sure which yet – and it’s not long until he’s pressuring Bone to come in on a plan he’s hatched with Valerie to blackmail Cord, then turn him in to the cops regardless of what he does.

Bone tells Cutter the scheme is crazy and he should be careful. Cutter replies it is Bone who should be careful, as he is the only witness to the crime, a fact that’s been conveniently splashed across the front page of the local newspaper.

Cord is one of the those guys who are a staple of hard-boiled noir; the tough as nails businessman who has dragged himself up by his bootstraps, an ex-wildcatter who made a fortune in the oil business. His power and liking of casual violence – in this case directed at young female hitchhikers – are matched only by the impunity with which he gets away with things. The kind of man you don’t want to mess with.

Bone eventually agrees to deliver the blackmail letter. We see him walking into Cord’s anonymous Los Angeles corporate office while Cutter and Valerie wait in the car. Only later does he admit he was only bluffing and never intended to deliver anything.

While Bone returns to Santa Barbara, Cutter remains to follow through his plot, ringing Bone to gloat he’s dropped off the blackmail letter. Meanwhile, Bone sleeps with Mo then slinks off into the night, only finding out next morning that their house has been burnt to the ground with Mo inside it.

Standing amid the smoking ruins, an image that strongly evokes Vietnam, Cutter is in no doubt who the culprit is. Putting aside their grief and anger at each other, he and Bone team up to confront Cord at a party at his mansion.

They’re a sight, Bone dressed as a chauffeur ferrying a formerly attired Cutter armed with a pistol in the backseat of a limo. The act gets them past the front gate muscle and eventually into Cord’s house for the film’s bleak ending.

With its ambiguous plot, minimal action and lack of (then) name stars, it’s a wonder Cutter’s Way ever got a release. The director, Ivan Passer was a virtual unknown, as was Jeffrey Alan Fiskin, who shaped the screenplay from the 1976 novel Cutter and Bone by cult author Newton Thornburg. The film bombed at release. The studio only persevered with it following a persistent campaign by a number of film critics.

But it’s the underrated John Heard (remember him as the washed cop in the Sopranos?) that steals every scene he is in. Cutter is a tragic figure one moment, a self-pitying bigot who is more than happy to use Vietnam as an excuse for his behaviour, the next. After deliberately trashing the neighbour’s car on a drunken spree, he goes inside his house to put only his military duffel coat so he can play the wounded veteran routine when the cops arrive.

But although he’s prepared to play the Vietnam card when convenient, the injustice of his experience is not lost on him. In response to Bone’s questioning about why he’s so keen to pin the murder on Cord, Cutter replies, “Because he’s responsible”, if not for the death of the girl, then for the war. “Because it’s never his arse on the line. Never. It’s always somebody else’s.”

A key theme in Thornburg’s books is retribution for the young who fall prey to the dangerous and amoral lure of post-Summer of Love California. Another of his books, To Die in California, centres on a cattle farmer from Illinois who sets out to discover how his son died in California, the only witnesses to the boy’s apparent suicide and a fixer for an ambitious political fixer and a rich but idle woman.

Cutter’s Way portrays a corrupt and paranoid world, where government, big corporations and the political elite are responsible for much of society’s wrongs, whether it is dropping napalm on peasant villages or killing a 17-year old girl, and justice is at best pyrrhic.

As he aims a pistol at Cord in the very final scene of the film, Bone says, “It was you.”

Cord just smiles, puts on his sunglasses and says, “What if it were?”

This article originally appeared in Back Alley Noir’s Film Noir of the Week in August 2010.