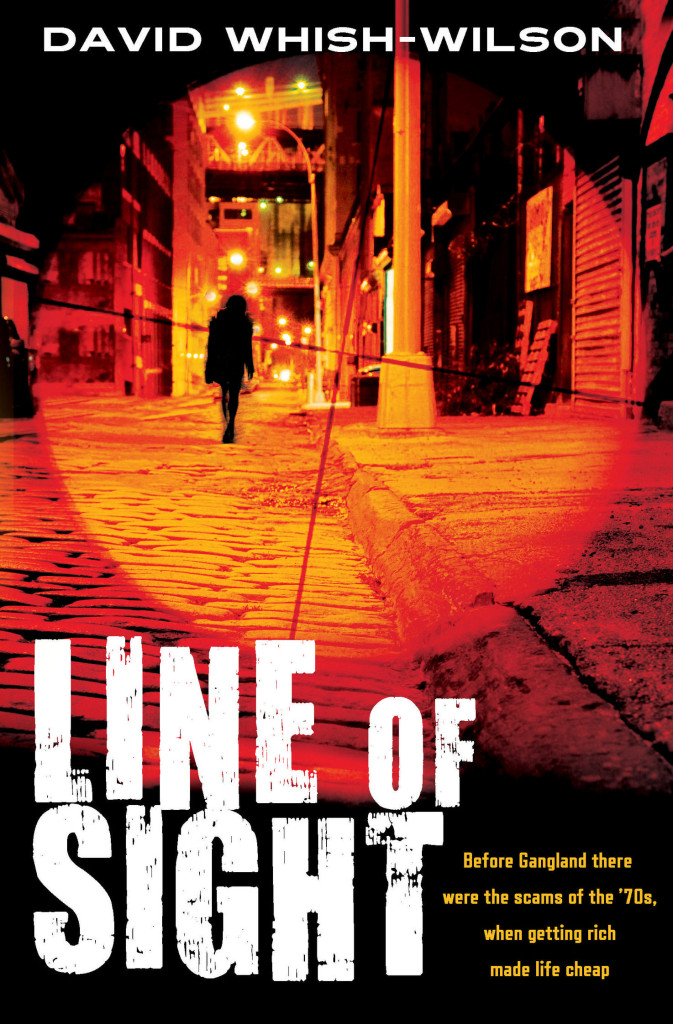 I am not going to let the fact that I have not read a book stand in the way of publishing a review of it, especially when the book in question sounds as interesting as the second novel by West Australian-based author David Whish-Wilson.

This review was originally appeared on the blog of my partner in crime Angela Savage, whose own book, The Half Child, has recently been released by Text Publishing.

Line of Sight is set in Perth in 1975 and is based on real events surrounding the unsolved murder of South Perth brothel owner Shirley Finn. In Whish-Wilson’s novel, the victim is celebrity brothel madam Ruby Devine whose body is found in her car, abandoned on a Perth golf course. Like Finn, she was shot at close range four times in the back of the head.

Superintendent Frank Swann formed a friendship with Ruby Devine when he worked as a detective in Kalgoorlie some ten years earlier. Though prostitution was illegal, Kalgoorlie was ‘famous for its prostitutes’ and Swann, adopting a harm reduction approach before it was fashionable, took steps to control rather than suppress the industry. However, as he makes clear to the Royal Commission into Matters Surrounding the Administration of the law Relating to Prostitution, which opens as the novel begins:

“It was not my practice to solicit monetary of sexual favours from Ruby Devine, or from anyone else…I am on the record as saying that there has never been a time in the history of this state when prostitution and some of the policemen who controlled it haven’t come to a financial understanding. I can only assume this is still the case today.”

In the Western Australia of Whish-Wilson’s novel, nothing happens without a financial understanding. The state is on the cusp of a mining boom and the price of doing business is twenty thousand dollars in cash, ‘payable to the Minister for Police himself’. That Ruby Devine’s murder goes unsolved is no surprise to Swann given the same people who’d killed her are leading the investigation. When Swann takes the stands against his fellow cops and accuses them of corruption, the stakes are too high to let him get away with it.

Line of Sight is a gripping, tense thriller, peopled by credible characters. Swann’s investigations bring him into contact with sex workers and street kids — his own teenage daughter is missing — whose work as heroin mules may be connected to Ruby’s death. The reader is also taken inside the head of the Victorian magistrate Justice Partridge, who is forced to play out the Royal Commission even knowing it’s a farce, and whose health is failing. Another thread follows a nameless hired assassin as he stalks his victim through Perth’s suburbs.

Whish-Wilson does an excellent job of evoking the Western Australia of the 1970s where the locals set themselves apart from the rest of the country, and operate with their own set of rules, where corruption is synonymous with business and the wealthy rule with impunity. Take this reflection from Patridge after a dinner with the WA Premier and his cronies at the local Freemasons Lodge:

“What had most surprised Partridge was the almost nationalistic fervour with which the men regarded their state, They seemed uninterested in the recent events in Canberra, had made little mention of the sacking of the federal government by the Queen’s representative, something Partridge took as evidence of their fierce antipathy towards the eastern states. It was a sentiment that showed through under the gentility of their private-school accents, which had become broader the longer the evening continued.”

Whish-Wilson links these attitudes to the state’s origins:

“The first colonial building was a jail, and when the free men hadn’t been able to make a go of it, the whole colony was turned into an open prison, populated by screws and cons, johns and janes, and nothing in between.”

Swann is the story’s moral centre, a reminder that people, while never perfect, have choices. A major part of the tension in the book hangs on whether Swann will find his daughter and give evidence to the Royal Commission before he is killed.

There is a moment towards the end where Swann says to the Royal Commission, “I would just like to remind you all that Ruby Devine was the mother of three children. I hope that one day they will know justice”.

Shirley Finn was also the mother of three children and the novel is dedicated to her son, Shane. After thirty-five years, they still have justice in their sights.

Line of Sight by David Whish-Wilson is available now from all good bookstores. Published by Viking Australia, rrp $29.95.