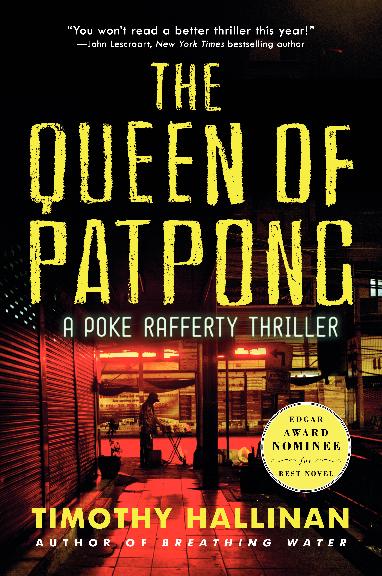 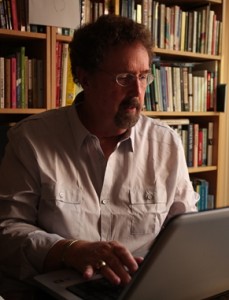 I’ve lived there off and on for 30 years, and it’s the most interesting city I know – just a total collision between sleaze and spirit, luxury and poverty, sprawl (it’s the third-biggest city in the world in terms of area) and small towns, because a lot of the little neighborhoods that make it up were once towns that the city ate, and they remain very insular.  Its Thai name is Krung Thep, which means “City of Angels” and it’s one of the world’s most conspicuous vice centers.  Also, Bangkok is where the power is.  The political troubles that created the Red Shirt/Yellow Shirt clashes all boil down to Bangkok and its entrenched, wealthy, old-family Thai-Chinese families versus the rest of the country, which is browner, less Chinese, and a whole lot poorer.  The July 3 election, which will have happened by the time interview this sees the light of day, is the latest, and perhaps the most extreme, expression of this division in the country.  (This is the background to the third book in the series, Breathing Water.)

One of the things I like about The Queen of Patpong is how different it is from most crime novels set in Thailand that are written by men. Most of these are set in or around the sex industry, but a large part of your story is actually told from the point of view of Rose and how she ended up working as a prostitute in Bangkok. It’s not the first time I’ve heard a story like that, but it’s the first time I can remember hearing about it through the medium of a crime novel. Why did you decide to do this?

From the first book on, I’ve known I wanted to backtrack and fill in the stories of the members of Poke’s little family.  I did Rose’s story first because I knew what it was, which for me is an enormous luxury since I write entirely off the top of my head.  Eventually, there will be a book in which a peasant woman knocks on the door and announces that she’s Miaow’s mother, but that’s two or three books away.  I told a lot of Poke’s backstory in The Fourth Watcher, so I probably won’t give that a book of its own,

Not only do you do it, you pull it off so well. How did you do the research to tell Rose’s story in so much detail?

The story, in its broad progression—innocent village girl to prostitute with gold on her neck and wrists—is almost folklore in Thailand by now.  The big tourist sex areas opened up fifty years ago, during the Vietnam War, and bar girls have been telling sanitized versions of their stories to customers ever since.  But the fact that it’s sanitized and that it’s being told to pry more money out of the customer doesn’t mean that it’s not true, and it doesn’t mean that a heart wasn’t broken several times while it was happening.

I talked to bar workers, but mostly I talked to former bar workers, who went down to Bangkok when the sex scene was less professional and women went down there, danced and went with customers for a few years, and then went back home.  Nowadays, it’s a career, and many of the women are in their thirties and in their second decade on the job.  I didn’t want Rose to be in that category, so I fudged the timeline a little and put her into the Patpong that actually existed in the 1980s.

Was it difficult as a man to put your head in her character and write her story?

It was the hardest thing I’ve ever done.  I almost tossed the book twice.  Until Queen I’d avoided writing even scenes in which women talked without men present – there’s a very short one in The Fourth Watcher and a couple of chats between Rose and Miaow, but that was it.  And suddenly here I was, women everywhere and hardly a man in sight, and these women were at a difficult time in their lives, facing very intimate decisions.  I kept tiptoeing around the sex, and then I figured, what the hell, and wrote the long chapter directly about it, which was really about how Rose accommodated herself to it. It’s got one paragraph I particularly like:

She learned early not to call anyone by name during sex.  While she was working on whoever it was tonight, he was indistinguishable from who it had been last night or who it was three weeks ago.   Only later, when they were sitting up in the bed, he contented and satiated and Kwan with the covers tugged up to her armpits, counting the minutes until she could leave, would she venture the slightly risky Philip or Jack.

What has been the reaction to the book, especially in Thailand?

It just came out in Thailand, and only in English, so there hasn’t been much.  Here, it got great reviews, stars in all the book trades, and it was nominated for an Edgar.

I’ve had eight or ten pieces of fan mail from women who worked in various aspects of the sex trade, and they said it told pieces of their story very accurately, and that actually means more to me than anything else that’s happened with the book.

If there’s one minor quibble I had with The Queen of Patpong, it concerns the central male character, Poke Rafferty. For a travel writer he’s a not afraid to physically go up against some pretty hardened men and he does it pretty well. What’s your reaction to that?

Ah, well.  Poke writes a very specific kind of travel, rough travel, which means outside the tourist topiary, on the back streets, in the places tourists don’t usually see.  When I first got the idea for the series, it seemed to me that a guy who wrote such books would have street smarts, at the least; he wouldn’t be a mark for anybody.  So he’s already on the balls of his feet, so to speak, and ready to jump when it’s necessary.  And he’s got a very short fuse where his family is concerned—he goes homicidal, as we see literally at the end of Queen.

Also, he’s smart enough to improvise weapons on the fly, whether it’s a bag of chili sauce, the door of a car, or the other guy’s knife.  I think the important part of Poke’s violent side is that it’s really okay with him if the other guy ends up dead.  Most people just don’t go to that place.

In this book, as you point out, he’s up against some fearsome men, and that’s why I wrote the fight scenes in such detail.  In most of them, he either just out-thinks them, or, in the case of the scene where he and Miaow are pulled out of the cab, he’s both in a blind rage and he out-thinks them.

Will there be another Poke Rafferty story?

There will be many, I hope.  Right now I’m working on the fifth, which is called The Fear Artist, and as usual when I’m at this point I think it’s both sensational and dreadful.

Nearly all the crime writing I can think of coming out of Thailand at the moment seems to have been written by foreigners. Is that a fair statement? If so, why do you think that is?

Well, certainly the crime writing in English is.  I think Chris Moore is to blame for that—he sort of invented the Bangkok farang private eye with Vincent Calvino, and many others, some of whom are very good, have followed in his steps.  There are a couple of good Thai writers, Tew Bunnag and Vasit Dejkunjorn, in Bangkok Noir, the anthology Chris edited to benefit a charity that takes care of some of Bangkok’s poorest kids.  I’m very proud to have a story in the book. 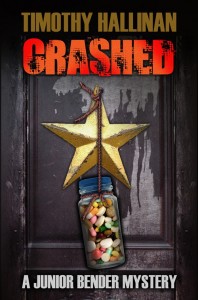 In 2010 you released the first in what I presume will be a series of books called Crashed. I haven’t been able to get it in Australia yet, but I believe it features a burglar called Junior Bender who moonlights as a private eye for crooks. Where did you get the idea?

I just like the idea in the old Dylan song, “To live outside the law you must be honest.”  I started thinking about an honest crook and then I got a first-person voice in my ear, and it essentially derailed my life for five weeks, and when I was finished I had a very rough draft of CRASHED.  Junior appeals to me because he’d got an idiosyncratic code of honor; he’ll steal from those who have but he won’t break his word, and he loves his 12-year-old daughter, Rina, to distraction.  He also still half-loves Rina’s mother, Kathy, from whom he’s not very successfully divorced.  And he’s smart, and I like writing smart characters.

One of the nice things (for me) about the Junior books is that they’re mysteries, in which we don’t know whodunnit until (I hope) the end.  The Pokes are thrillers, in which the question is not so much whodunnit as how do you survive it, and they’re quite different kinds of books.  Although the new Poke, The Fear Artist, is probably going to have a whodunnit element to it.

Your latest project is an anthology to raise funds for he victims of the Japanese earthquake, Shaken: Stories for Japan. Can you tell me about this and who’s in it?

This was one of the great experiences of my writing life.  I was watching the footage of the disaster and moved to tears by the dignity of the individual Japanese in responding to it, and I asked myself why writers couldn’t do benefits, like musicians and actors can. And I thought immediately, “Well we can – e-books.”

Within about four days I had some of my favorite mystery writers committed to contribute a story. Some fell out, but nineteen stayed to the bitter—or, rather, very sweet—end, contributing wonderful stories.  They’re not all mysteries or crime stories; the only thing I asked was that they have something to do with Japan.

And Amazon is donating its share, too, which means that every penny of the $3.99 price goes to the 2011 Japan Relief Fund.  So thanks to Amazon, too.

This entry was posted in Crime fiction, Crime fiction and film from Thailand, Interviews and tagged Crashed, crime fiction in Thailand, Shaken: Stories for Japan, The Queen of Patpong, Timothy Hallinan. Bookmark the permalink.