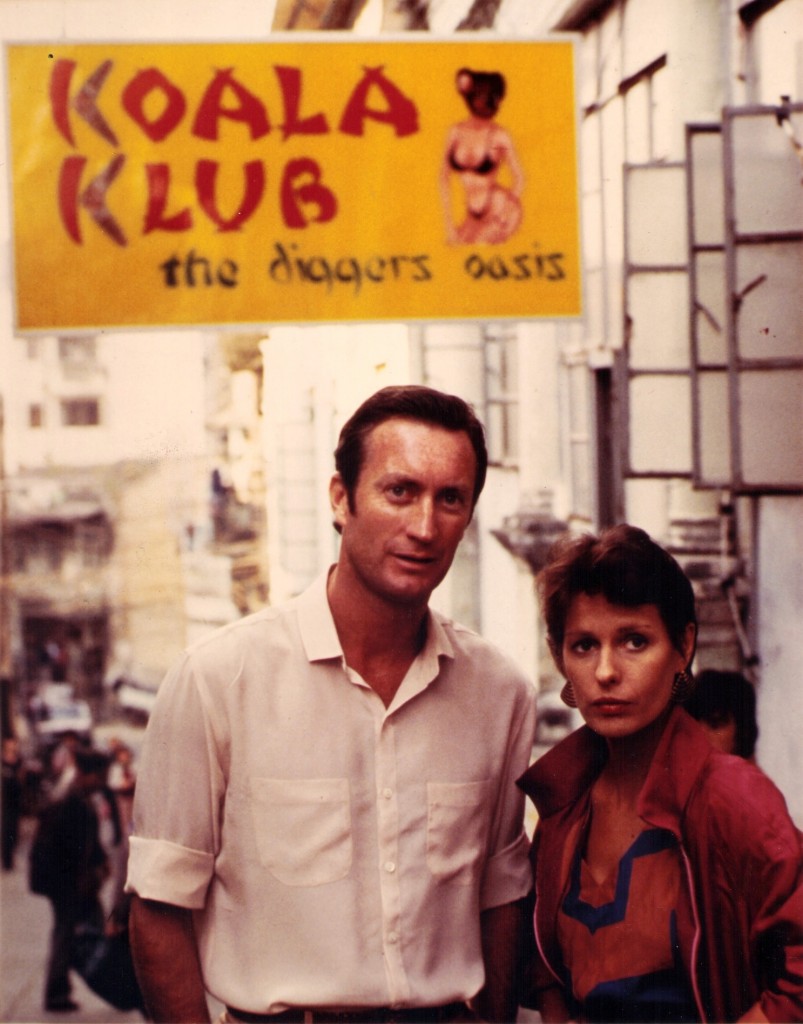 The Asia hand has usually been a minor character Western crime films set in Asia, the drunken Westerner propping up the bar in some seedy hotel or proffering false information or documents. Two films that explore in more detail the themes embodied in the persona of the Asia hand are Peter Bogdanovich’s 1979 Saint Jack, based on the Paul Theroux novel of the same name, and the little known 1982 Australian thriller, Far East.

In Saint Jack, Ben Gazzara plays Jack Flowers, a small time Italian American hustler living in Singapore in the early seventies whose ambition is to open up his own high-class brothel.

The film is split into three sections, set several years apart. In the first, Flowers is still very much a bottom feeder. Although he projects confidence in his neatly pressed slacks and batik shirt, he ekes out a precarious existence on the fringes of Singapore’s society. He’s so skint he has to haggle with his Chinese bosses for the taxi fare to pick up William Leigh (Denholm Elliott), a mild mannered English accountant sent from head office in Hong Kong to audit the books. The one currency Flowers has no shortage of is contacts. Taking Leigh and a visiting American businessman on a tour of the island’s nightlife, Flowers is on first name terms with every hooker and tout he meets.

In the second section, Flowers has established his brothel in a magnificent British colonial villa. Things are going well until one of the local Tong gangs, resentful he’s cutting in on their action, trash the place, beat Flowers up and tattoo obscenities in Cantonese all over his arms.

Flower’s is thrown a lifeline in the film’s third section by a mysterious spook, Eddie Schuman (Bogdanovich in beige safari suit and dark sunglasses), who wants him to run a US army sanctioned operation on the island catering to American soldiers on R&R from Vietnam. Schuman sets Flowers up in a huge compound complete with pinball machines, alcohol, girls and a loudspeaker system piping continuous Country and Western.

While Flowers appears to be in his element, he quickly grows disillusioned. This peaks when one of the soldiers freaks out and beats up a girl. Flowers goes to confront the perpetrator but is unable to do anything other than stare in disbelief at the sight of the soldier sitting listlessly in front of the TV, well beyond any reasoning.

“We’re in the slaughter house business,” he tells Schuman. “We’re the ones that fatten them up.”

Although Flowers wants out, Schuman has other ideas and offers Flowers $25,000 to gather incriminating evidence on a closeted gay anti-war US politician (George Lazenby) who is visiting Singapore. 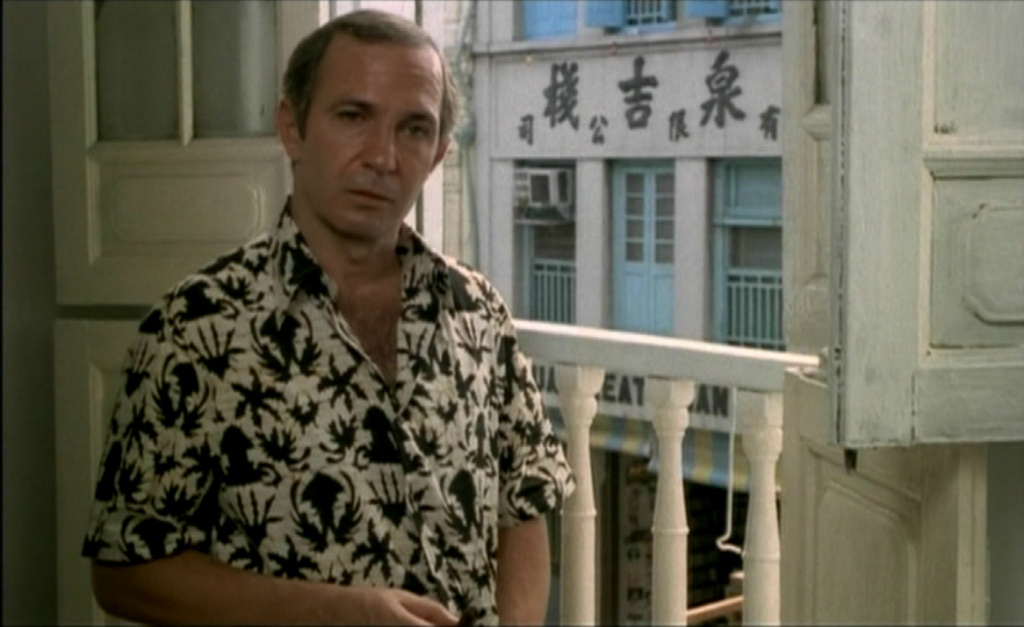 Set in a poor, corrupt, unnamed Asian country (the Philippines during the reign of dictator Ferdinand Marcos) Far East focuses on Morgan Keefe (Bryan Brown), an ex-Vietnam veteran who runs a bar known as the Koala Club.

It’s not clear whether the Koala Club is based on the infamous Aussie Bar, a real life Manila drinking hole which for years operated as a safe house for Australian crooks on the run and a recruiting post for merchant sailors prepared to smuggle guns and drugs.

Although the Koala Club caters to a very rough crowd, Morgan likes to keep everything above board. This is established in the beginning when he gives a dancer’s job to a girl who has just arrived from the provinces, then throws out an unruly patron who tries to come onto her.

Brown plays Morgan like so many of his roles in the seventies and eighties, with a hefty dose of working class masculinity. There’s none of Jack Flower’s existential complexity. Indeed, there’s no outward sign Morgan has any ambition than to do what he’s doing until Jo Reeves (Helen Morse) a former lover from his Saigon days, walks into his bar.

Jo’s husband, Peter, is a political journalist who has dropped into town to report on life under the dictatorship. While Peter embarks on a series of clandestine encounters with labour organisers and radical priests, Jo and Morgan rekindle their relationship.

Then Peter and his female interpreter are kidnapped by plainclothes paramilitaries. The Australian embassy is useless and the local police stonewall. What Jo needs is someone who can navigate the world of how things really operate not just how they appear, so she approaches Morgan for help. Morgan agrees to use his contacts to get the husband and his interpreter out of jail and the country. His first point of call is a sleazy plainclothes Filipino cop who hangs around the Koala Club. After a bit of soul searching, Morgan agrees to pay the cop his asking price for cooperating, a night with his new dancer.

The cop discovers the journalist and his interpreter are being held in an unmarked military prison. Morgan breaks them out with the help of some of the Koala Club’s clientele. What he hasn’t prepared for, however, is being is double-crossed by the plain-clothes cop that feed him the prison’s location.

Cultural studies students will have a field day with many aspects of the white-men-adrift-in-Asia plots in Saint Jack and Far East. But despite their obvious shortcomings, both films have a gritty and strangely compelling quality to them.

Saint Jack is definitely the stronger of the two, mostly due to Gazzara. He inhabits the character of Jack Flowers with the same world-weary sangfroid he gave Cosmo Vittelli in The Killing of a Chinese Bookie. But while Cosmo was in denial about life, Flowers’ exudes a palpable sense of opportunities lost and paths not taken.

In the tradition of the best noir characters, Flowers knows his decisions will lead to trouble but is powerless to do anything else. An ex-Korean war veteran and failed writer, we are not told why he came to Singapore. All we know is if he’s going to be the eternal ang mo (foreigner), he’ll do it on his terms, no one else’s.

I’ve read reviews of Far East that describe it as an Australian attempt to remake Casablanca. If so, it serves no other purpose than to remind us how good the original is. If anything, the depiction of Asia in Far East is even cruder than Saint Jack, the local characters even more thinly drawn, long suffering girlfriends, trophy wives, scheming businessmen and leering bad guys.

While there is an air of mystery about Flowers, Morgan is far less complex. “Why didn’t you go home?” Jo asks him at one point. “No reason,” is all he says.

What Morgan does share with Jack Flowers is a fatalistic take on life. As if blowing open a secret prison and killing its guards is not going to significantly upset Morgan’s life, but he does it anyway, partly in an effort to woo back his former lover, partly just to shake things up.

For all their clichés and stereotypes, the most fascinating aspect of both films is their depiction of an Asia very different to that which emerged from the economic boom of the eighties. It’s something, both the directors had to go to great lengths to do.

Director John Duigan shot Far East in the then Portuguese colony of Macao. Why is not clear given that throughout the seventies and much of the eighties, the Philippines was the place of choice for every American B movie hack (or visionary, take your pick) wanting to make a movie. As ham fisted as it is, perhaps the movie’s anti-dictatorship themes were deemed unsuitable by the local authorities to allow the film to be made in country.

Bogdanovich filmed Saint Jack on location using a fake synopsis in an effort to placate the local authorities. The Singaporean government was incensed when it discovered the deception and banned movie until as late as 2006.

A version of this article originally appeared in Crime Factory, issue 6.