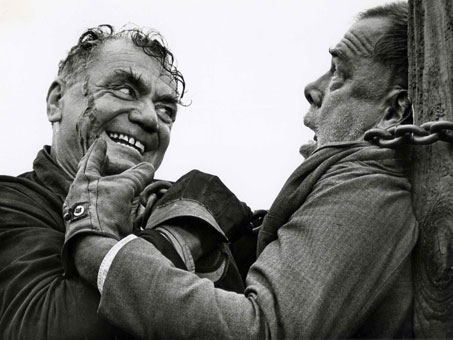 Except for the number 19, watched over by a sadistic train guard known as Shack (played with eye popping intensity by Ernest Borgnine). With the aid of the large hammer he carries in his belt, Shack ensures that no one rides the number 19 for free.

The only man prepared to go up against Shack is a hobo called A No 1, a great turn by Lee Marvin who looks a million years old in the part.

Can A No 1 succeed in riding the number 19 or will Shack stop him? It’s a very simple premise and it works. 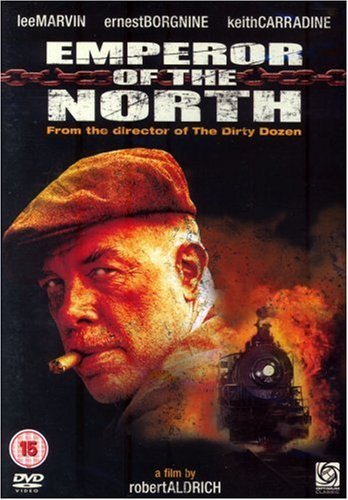 Aside from some great scenes set in rail yards and the hobo camps that have sprung up along the railway tracks, this film has very little in the way of subplots or embellishments. The focus is entirely on the battle of wits between Shack and A No 1.

The only other character to get a look in is Keith Carridine as Cigaret, a young drifter who thinks he’s tough but has got a lot to learn. As A No 1 tells the young hobo about freight hopping, “Don’t ever grab unless you’re sure you can hang on”.

It’s stripped back, two-character focus reminds me of another Lee Marvin film, Hell in the Pacific, directed in 1968 by John Boorman. Set during WWII, Hell in the Pacific revolved around the battle of wits between two marooned men from opposing armies: an American pilot (Lee) and a Japanese navy captain (Toshiro Mifune).

Emperor of the North is just one of the many fantastic films on the Bounty catalogue, which includes film noir, queer movies, classics, war, a growing horror list, even Filipino grindhouse

The two newest Bounty releases to arrive in my mail box are the Bobby Suarez efforts, Cleopatra Wong (1981) and One Armed Executioner (1983).

Cleopatra Wong features Marrie Lee as Singapore’s top policewoman, who teams up with her Filipino counterpart to but as pan-Asian counterfeiting ring.

As for describing One Armed Executioner, I’ll defer to one of IMDB’s reviewers: “This is the story of an Interpol agent turned restaurateur, out for revenge against the gangsters that cut off his arm and killed his bride. This tragedy left him deeply depressed, and his battle with depression has to be won first before he can be thoroughly trained in martial arts. After his training, Ortega hunts down his adversaries for a final reckoning.”

I’m looking forward to finding some time to check both titles out.