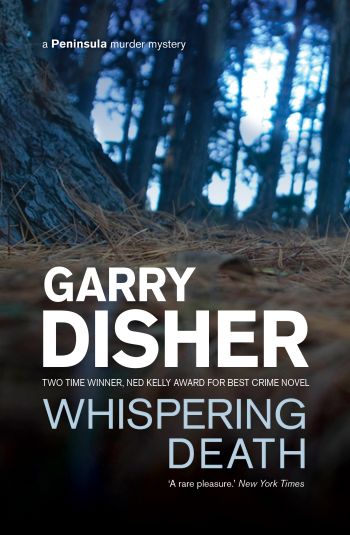 Whispering Death opens with sergeant Ellen Destry on her way to Europe to study how the police tackle sex crimes, leaving her lover and veteran cop, Inspector Hal Challis, to deal with a rapist who wears a police uniform and has a sophisticated knowledge of forensics. The rapist’s first victim is found wandering dazed in bushland, the second dead in the boot of a car.

The local police also have to contend with an armed robber who is reportedly making their way south from NSW, and a female cat burglar who is about to come face to face with a past she’s tried very hard to escape. As if all this is not enough, Challis is in the shit with his superiors for speaking to the media about police budget cuts.

Disher’s writing is clear and assured with an emphasis on less is more. For example, this insight into Challis’s past:

Then she saw his face shut down as if a shadow from his past had crept in. She’d heard whispers over the years. He’d met his wife on the island and she’d gone with him from one rural posting to another as he rose in the ranks. Then, somewhere in central Victoria, she’d started sleeping with one of his colleagues and she’d conspired with her lover to kill Challis. Something about an anonymous call and a lonely bush track. The wife was dead now. Suicide in jail. The lover was due for parole in a year or so.

Disher juggles all the plots strands well. Although for my money at times Disher supplies slightly too much information about the interior lives of his characters, there’s no doubting his almost surgical skill in dissecting their tangled lives.

He avoids the pedestrian nature of many police procedurals through his ability to chronicle the underbelly of life in Melbourne’s growing outer suburban fringe, including the gap between rich and poor and stress created by rapid population growth, including for the police. This is definitely not CSI, Challis and his co-workers are understaffed and so underfunded they have to use their own cars to get to crime scenes.