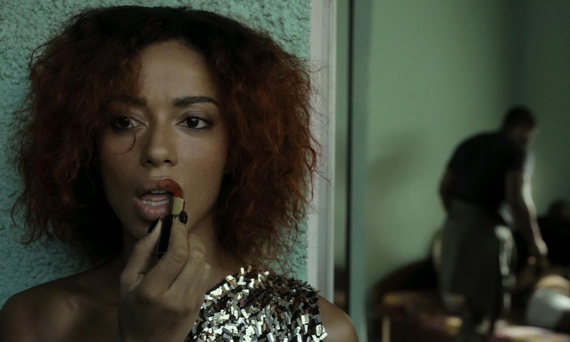 Everyone in this film is on the make, whether it’s for money, sex, food, or safety. And everyone is corrupt. The police, the military, even the local priest who negotiates to buy the fuel using the money raised from the church’s congregation. “Priests need gasoline too, alas,” he tells Riva.

Riva doesn’t care. Like Tony Montanna in the 1983 Brian De Palma classic Scarface he is prepared to do anything to get ahead and thinks nothing of complicating his problems by going after Nora, the girlfriend of Azor, one of Kinshasa’s most feared crime bosses.

Kinshasa is a sprawling, jerry built city with no power and no petrol, full of slums interspersed with areas of sun bleached French colonial architecture. Street kids play along the unpaved roads. At night the place looks incredibly dark and forbidding.

I can’t remember a city so ominously portrayed in a crime film. It reminds me of post-civil war Phnom Penh in the early nineties, only way more dangerous

Viva Riva! is not for the faint hearted. The body count is high and there are some graphic sex scenes. And while aspects of it a little clichéd, the film has an incredible energy and feel to it, helped by a fantastic African soundtrack.

The film was written and directed by Djo Munga (who cites his chief influences as Akira Kurosawa and Sergio Leonne) and received 12 nominations and won 6 awards at the 7th African Movie Academy Awards in 2011, including the awards for Best Picture, Best Director, Best Cinematography & Best Production Design.

It left me wondering how many other crime movies set in Africa are out there I’ve never heard of.