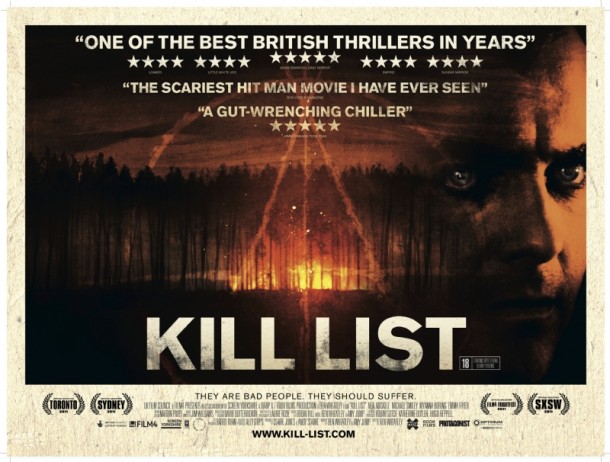 On top of that Jay’s got a few mental and physical health problems as a result of the botched hit he and his mate Gal (Michael Smiley) did in Kiev. It’s not clear whether these problems are real or imagined and it doesn’t really matter as there’s a strong suggestion he was fucked up long before that, probably as a consequence of what he did for the British army in Iraq.

Gal and his Tory human resources director girlfriend, Fiona, come over for dinner. During a break in the proceedings, Gal asks Jay whether he’s interested a job, a kill list of three people, a priest, a librarian and a MP.

Things get weird when they meet their new employer, a cadaverous man known only as The Client. After they agree to do the hits, The Client takes Jay’s hand, slashes it with a knife and does the same to his own, to seal the deal in blood.

Weird, unexplained events like this happen all the time in Kill List. Why do the first two victims thank the hit men for killing them? Why, during the dinner party at Jay’s house, does Fiona go to the bathroom and carve some sort of mystical sign on the back of the mirror, then stuff a wad of bloody tissues left over from Jay’s shaving in her bra? And what’s she doing later in the film standing outside Jay’s hotel room in the middle of the night?

Things get worse when the second hit leads Jay and Gal to some sort of underground movie archive. We don’t see what’s on the movies. Wheatley only shows us the reaction on the two hit men as they view them, and its bad. There’s also a safe containing files on Gal and Jay, including what happened in Kiev.

I can’t say much more. The last hit takes them to an almost deserted English countryside manor. It is night. As they prepare to enter, Jay and Gal spy a procession of men and women dressed in white, some wearing strange pagan masks, holding torches and walking in single file through the forest.

I’m not sure whether Kill List is an allegory for Iraq, a comment on political corruption, a riff on the hey day of British occult films like Wicker Man, or just the best horror-crime film I’ve ever seen.

It’s a disturbing, bizarre and disorientating film. And the ending. Believe me, it’s not for the faint hearted.