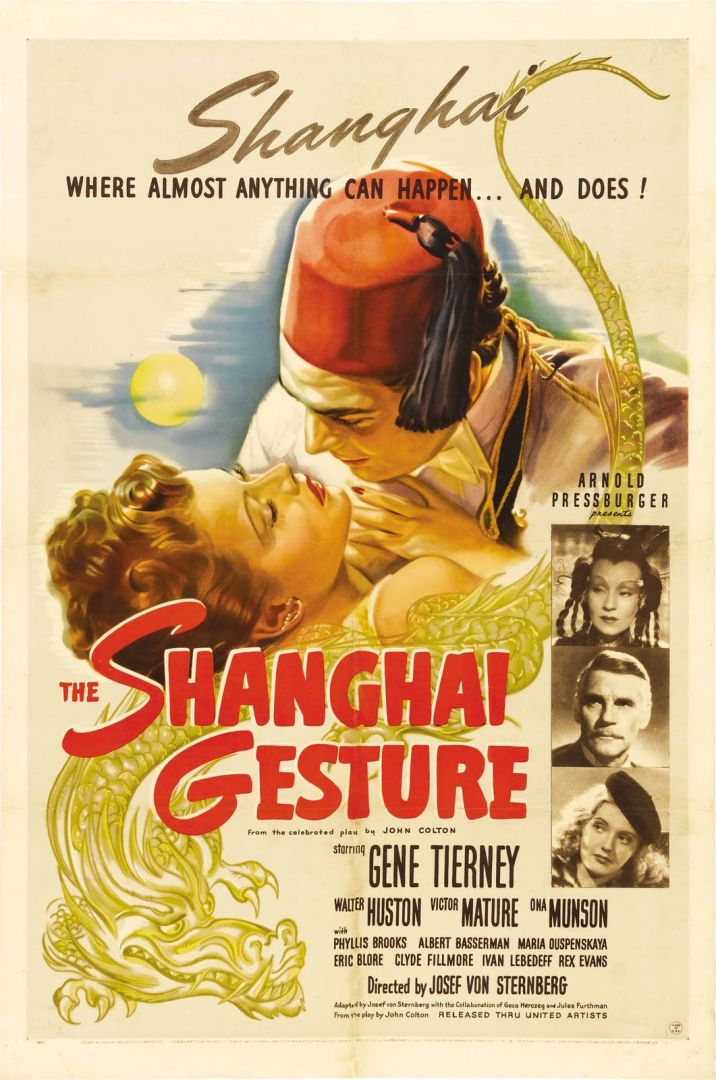 Based on a play by John Colton, the script of The Shanghai Gesture was problematic from the start, and von Sternberg was forced to make extensive cuts. The brothel in the play was turned into a casino in the film, but remnants of the original still reverberate. The dirtiest thing in the movie is what happens in your head as you watch it. It is incredible what von Sternberg got away with here.

The casino, with its circular tiers of white balconies, and enormous chandeliers rising up and down in the center, is a dazzling masterpiece of set design, calling to mind Dante’s circles of hell. Von Sternberg pulls his camera way back, so that you can see the space in its entirety, and it is dizzying, repetitive, an Escher drawing come to life. The clientele move and call and wave across the vast echoing space in the middle, blackjack tables and roulette wheels in the deep pit below. It is one of the most unforgettable interiors ever captured on film.

Through the casino strolls its owner, Mother Gin Sling (played with icy specificity by Ona Munson). She is a Chinese businesswoman, with her hands in every pocket that counts. The casino is now threatened with closure due to the property being sold to a British millionaire named Sir Guy Charteris (Walter Huston). Sir Guy Charteris has ulterior motives. His daughter, with the splendidly evocative name Poppy, is now lost in Shanghai, and he has been trying to lure her back to the civilized world.

Gene Tierney plays Poppy, and Tierney is at her most damaged and beautiful. She is clearly a drug addict (even her name attests to that), and over the course of the film her addiction to gambling spirals down. Victor Mature, loony and dead-eyed in his fez and white gown, plays Omar, Mother Gin Sling’s right-hand man, and he never lets Tierney out of his sight, making sure she is fed a steady stream of drink/drugs/money. For some reason, he recites portions of the Rubaiyat of Omar Khayyam to Poppy, in a bored drone that manages to be ridiculous and scary all at the same time.

Tierney is terrific here, bruised and wild. Von Sternberg’s camera eats her up greedily, ravishing her face, as though marveling at the contours of it with something approaching awe and despair. It is obvious that Poppy can never pay back her gambling debts and so Mother Gin Sling has Poppy just where she wants her. But why, Mother Gin Sling, why? Why do you want to destroy Poppy?

Not to fear. All will be revealed.

The pace of The Shanghai Gesture is glacial. Silence stretches around each bizarre moment in a way that is, at times, effective, and at other times obnoxious. Peter Bogdanovich tried to address the pace of The Shanghai Gesture in an interview with von Sternberg, but von Sternberg was dismissive in his reply. He used that slow pace because it was right for the story. The End. Von Sternberg’s camera moves almost lazily, taking in the faces, the places, the echoing public chambers, and the tension sometimes slackens because of too much dead air.

We meet other characters along the way, most notably Dixie, a showgirl stranded in Shanghai, adorable in her beret and ripped stockings. Dixie is picked up on the street by Omar and put to work by Mother Gin Sling (vestiges of the brothel-plot in the original play). Dixie is played by the kooky wisecracking Phyllis Brooks and she seems to have strolled out of another movie, a sister-in-spirit to the stranded showgirl Jean Arthur plays in Only Angels Have Wings. Phyllis Brooks had a short career, but she makes a wonderful impression here. She goofs off to keep herself amused, lolls about in armchairs waiting to be noticed, and treats everyone with an egalitarian humorous spirit, although it is obvious she is mainly thinking, “What is WITH all of these weird people?” If we had any doubt about how lost Gene Tierney’s Poppy really is, all we have to do is look at Dixie. Dixie comes from a recognizable world, a world she still remembers. At an uptight dinner at Mother Gin Sling’s, Dixie sits at her place at the table, playing with her spoon, putting it over one eye, then the other, making silly faces, hoping someone will laugh. No one does.

Sir Guy has been investigating Mother Gin Sling, and she has been investigating him. She is used to handling such men delicately, but the stakes are higher now, for reasons that remain murky until the very end. She ends up inviting Sir Guy to a Chinese New Year celebration at her home; it will be his entryway into the society of Shanghai. It will also be an emotional ambush. He, unaware of what he is walking into, sees it as his chance to talk some sense into his daughter.

The world depicted in the film is debauched and lawless and the pinnacle of that comes during the Chinese New Year celebration: Mother Gin Sling opens the curtains to her balcony, revealing to her guests what is happening outside. On the street below is a crowd of men, howling up into the sky. Hovering over the crowd is a series of suspended cages, and in each cage is a poorly clad beautiful young woman. The women are terrified. They have clearly been dragged from the street, drugged, probably raped, and then hung up for all to see in cages. You can see the terror in their faces, in the way they try to bring their dangling legs up into the cages for protection. It’s a scene worthy of Margaret Atwood’s creepiest futuristic fantasies, and, for me, it’s one of the takeaway scenes of the film. It comes into my mind often.

Ona Munson, a fascinating actress with a gleaming mask of a face, seems to chew off the ends of her lines with vicious precise little bites. Her gigantic hairpieces threaten to come alive at any moment, Medusa-style, yet she maintains an inner core of self-possession that makes this a riveting performance.

It is a testament to Munson’s talent that the hair does not overpower her. It does not. She dominates it. The character has a secret, a secret that has riddled her soul with hatred and a desire for revenge. She is patient. She will wait for the perfect moment to get her pound of flesh. Mother Gin Sling, in her exotic way, is the classic femme fatale of film noir, worldly in her dealings with men, knowing in her manipulations of more conventional females, and canny in her ability to get what she needs, whatever the personal cost.

The descent into the underworld in The Shanghai Gesture is a literal one, with the casino seeming to be carved out of the belly of the earth. There is no comfortable sense that the norms will be righted at the end of the film because there were no norms to begin with. Civilization exists here merely as a dim echo, as though the entire city of Shanghai lives at the bottom of a deep well. Shanghai’s sadistic culture is not something you can observe from a safe distance and then walk away unscathed. It enters into you, marking you for all time.