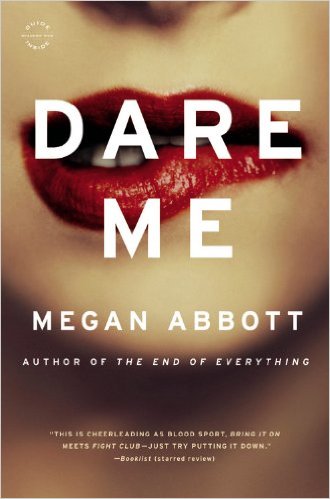 “At first, cheer was something to fill my days, all our days. Age fourteen to eighteen, a girl needs something to kill all that time, that endless itchy waiting, every hour, every day for something – anything – to begin. There’s something dangerous about the boredom of teenage girls.”

So says Addy Hanlon, narrator of Megan Abbott’s latest book, Dare Me. And you better believe it.

I’ll make no bones about being a huge fan of Abbott’s work (I’ve previously reviewed her work on this site here and here). Her first four books, set in America in the thirties, forties and fifties, took classic noir themes and characters and gave them a mighty twist. The End of Everything, her break out work, was a deceptively simple coming of age tale about a missing girl in an anonymous middle class American suburb in the seventies.

Dare Me takes place in the present, in another part of the great expanse of nameless US suburbia. Addy and Beth have been best friends for years and are the top dogs of their high school cheerleading squad. Beth is the captain, Addy always her faithful lieutenant. Cheerleading and their commanding place in it is the ground zero of their world. “Let’s face it,” Addy says at one point, “we’re the only animation in the whole drop ceiling, glass bricked tomb of a school. We’re the only think moving, breathing, popping.”

Their carefully constructed social hierarchy is thrown into chaos by the arrival of a new cheerleading coach. She is like nobody the girls have ever seen – cool, steely, sophisticated, domineering. After a brief battle of wills Coach French usurps Beth and starts pushing the girls to do more than just look good on the field. She gets them to work as a team, to do things with their bodies they never thought they could. And they start to like it. Even more disturbingly, they even start to look forward to the danger.

Addy finds herself particularly drawn to the new Coach and away from her old friend. But Beth is not a character to be trifled with or take rejection lying down and marshals her considerable resources to plot revenge.

As Addy puts it: “Beth has always known people – friends of her older brothers, sons of her mother’s exes, the brother of the woman from Peru who used to clean her house – that no one else knows or even sees. Her reserves of information, objects, empty houses, designer handbags, driver’s licenses and prescription pads seems limitless.”

When peripheral male acquaintance of the girls is found dead, it’s unclear whether murder, suicide or an accident is to blame. As the final game of the season approaches and the squad plans its attack like a crack group of marines about to hit Fallujah, Addy begins to wonder exactly what her old friend may be capable of.

In the hands of a lesser writer, Dare Me could have so easily been just another tale of teenage angst with a bit of an edge. But Abbott delivers a much more challenging story, one that’s not afraid to question some major sacred cows about young women and what they’re capable of.

If you’re interested in delving a little deeper into Abbott’s work, make sure you check out my in-depth interview with her in the latest issue of Crime Factory. The PDF is free or you can download it from our Kindle store for just 99 cents.

This entry was posted in Book Reviews, Crime fiction, Megan Abbott, Noir fiction and tagged Crime Factory, Dare Me, Megan Abbott, The End of Everything. Bookmark the permalink.