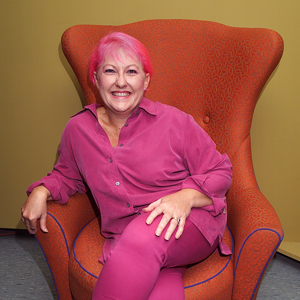 Well, we batted that around for several minutes arguing about what “popular” means, i.e. best selling, most widely read, most known author.  All of these things are not the same. The discussion then turned to what is an Australian author, i.e. someone who was born in Australia? Published in Australia? Did the books have to be set in Australia (DH Lawrence and Anthony Trollope visited and wrote books about Australia that were published here but could hardly be considered Aussies)?

These were arguments I had dealt with in my Phd on popular Australian 19th century fiction. As we are such an immigrant nation, my definition was books with an Australian sensibility. But then I broke my own rule and we decided that Carter Brown was Australia’s’ most popular author.

I knew the name but not much else. Then I started some preliminary research and found the Bleeck Collection at the National Library in Australia (NLA), the NLA had just acquired the collection and there were 700 books written by Gordon Clive Bleeck, and that was the tip of the iceberg. I visited the NLA and discovered thousands of books written by hundreds of authors not including Carter Brown (Alan G Yates).  As an Aussie who had studied Australian literature, I was ashamed that we had ignored the many, many books that the majority of Australians read.  So I decided to redress the imbalance.  On a less altruistic note, I realized I had an academic’s holy grail – I could publish for decades on them and go to conferences all around the world enlightening people as to Australia’s contribution to popular fiction. 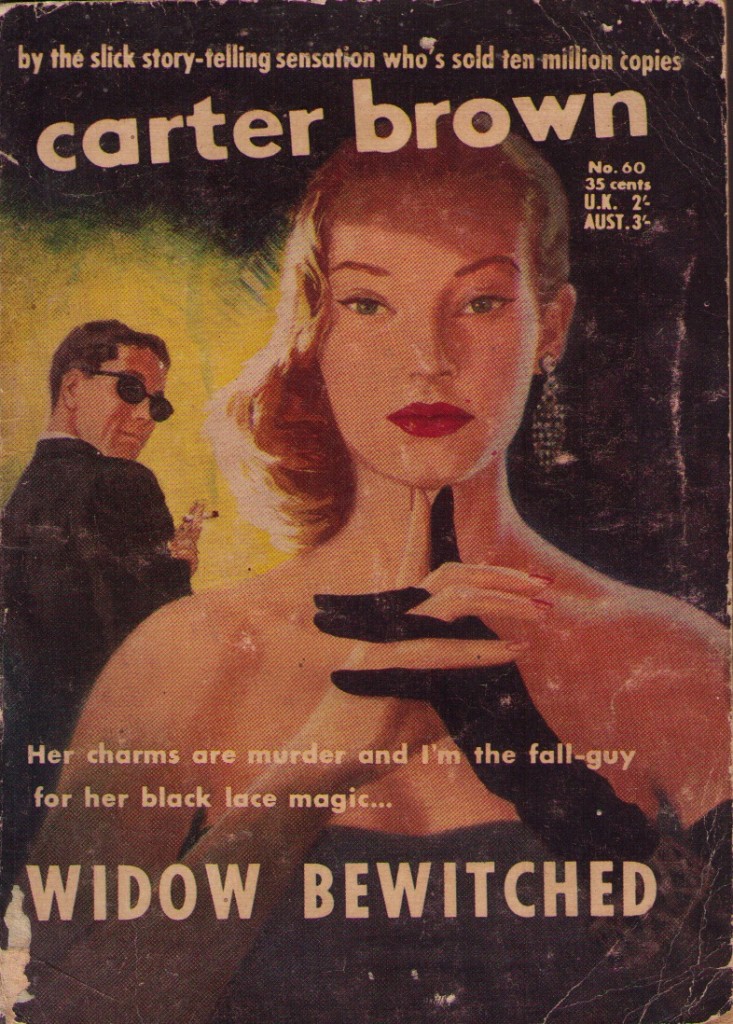 Can you remember the first pulp fiction that got your attention? What was it and where did you find it?

The first book I read was Carter Brown’s The Unorthodox Corpse.  The Fryer Library (at University of Queensland) had a battered copy and I loved it.  The story is set in a boarding school (in the USA, like 99 per cent of his books). It book amused me and I was hooked. It took me about 3 hours to read and I knew then why he was so popular.

Australia’s local pulp fiction industry seems to have almost completely disappeared off our cultural radar. This is despite its size and the fact that some of the authors, like Alan G Yates and Gordon Clive Bleeck, sold millions of books internationally. Why do you think that is?

At the time there was a tariff on imported books (not British ones, though!) and so the local industry had to print their own stories.  These were paperbacks about 34 pages in length (the very first ones in the 1940s) and cost a few pennies.  There was a new title each month and so readers could buy them and read them on the train/bus/tram, then discard them. The print was tiny.  But the books could fit into a handbag, coat pocket and offered readers a few hours of harmless entertainment.

The covers were and still are wonderfully lurid. In fact I was working in the Petherick Room at the National Library and had about 30 spread out on a table and they attracted considerable attention from the other scholars there.  They attracted so much attention the director of the library came down and asked me about them.  When I told her they were all Australian she, and the others that had congregated, were amazed.  Imagine in one of the most scholarly rooms in Australia, people oohing and aahing over Nude in a Boot.

The books were sold overseas because Aussie writers were fast and there were plenty of them; so overseas publishers could be assured of a ready supply for their monthly issues.  These books were published under magazine like conditions – a new title each month. Denmark, Norway, Sweden, Germany, France all published them.  Detective and westerns are the most popular; then romances. Eventually US publisher Signet picked up Carter Brown and they aggressively pursued international publication.  We can thank the imagination of a couple of Sydney publishers (Horwtiz and Cleveland) for giving this fiction global distribution.

Then it all virtually stopped. In 1959 the tariffs were lifted and overnight many of the smaller publishers (Action comics for instance) closed down. Bleeck’s diaries demonstrate that suddenly the outlets for his fiction dried up.  However, Cleveland still wanted westerns so he settled to writing one book a month for them.  One book a month-and he thought the industry had closed.

You’ve conducted extensive research into the history of Australia’s pulp publishing industry. What were some of the main challenges involved in that? 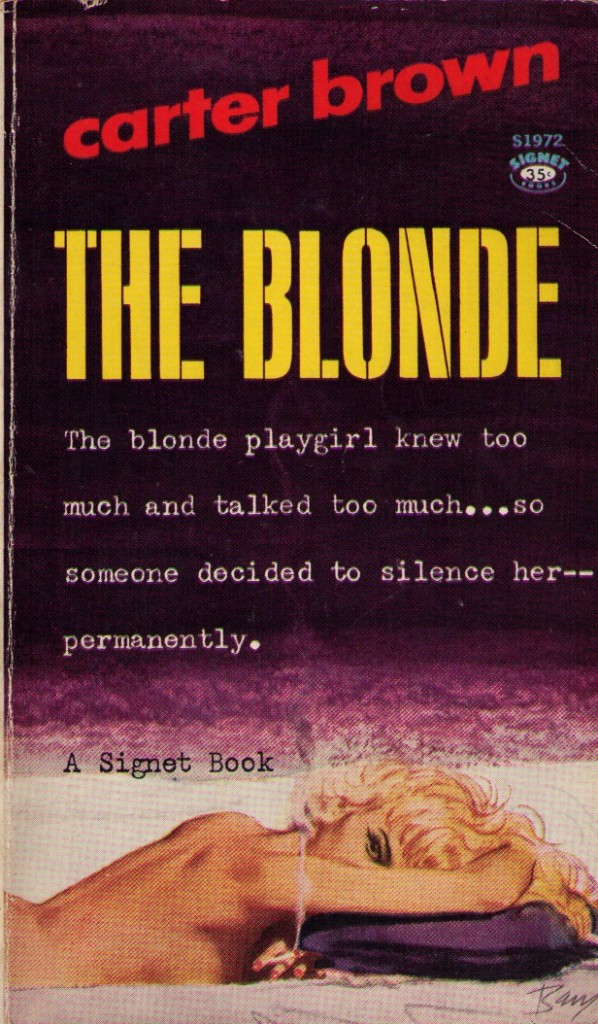 Finding the material.  I would order about 100 titles but the librarians could usually only locate about 80 per cent.  I then turned to Ebay – and there were plenty there, but oh the price.  Collectors in Japan and the USA have deep pockets and often I couldn’t afford to buy them.  Some attracted nearly $200 – but only the very old and very rare ones.

Some titles I have never tracked down. I had to visit libraries in Sydney, Melbourne, Adelaide and Canberra. Overseas, I have visited the British Library, the Danish National Library, the French, Finnish, and Norweigan National libraries.  In every country, librarians are transfixed by the number of Australian books they hold. Often they have never heard of the publishers so I know little about how they were published there.  Of course I have had all my relatives and friends look in the cupboards and keep an eye out in second hand bookshops. But the secret is out and they have all but disappeared.

Did you actually manage to talk to any of the writers from the forties and fifties before they died?

I managed to talk with one female author, Audrey Armitage. She wrote the Johnny Buchanan series with another female.  She told me that she supplemented her journalist salary with these books, the money went on a deposit for a house.  How Australian, hey?

I sent her a few emails recently but no reply, I fear she might have died. I also talked with C J MacKenzie who claims to have written some of the Carter Brown books but that appears to have been a bit of an exaggeration. (People also claim that Rob Silverberg wrote some but when I wrote to him he said he had but they were rejected by Signet).

Yates had a definite style and I haven’t read a book that wasn’t written by him. Of course, there are computer programs that might prove me wrong but I am not interesting in going down that path.  It is important to remember the books were written to a “series” formula and edited to reflect that formula.  So it could be virtually impossible to tease out the exact author.

I have also talked with Alan Yates’ family members.  They were very helpful.  Mrs Yates was a font of information but time can often change memories so I have to be careful what they remembered and what the files showed.  Yates’ correspondence is at the Fales Library in New York City and one day I want to write an article comparing him to Mickey Spillane and Erskine Caldwell both of whom Signet also published.

Pulp fiction is often viewed as male dominated, that most of the writers were men, and probably most of the readers. Is that a fair assessment?

Hmm—yes most of the authors were men.  But it’s difficult to know because so many the books are written under a pseudonym, especially the romances.  Until I can get my grubby little fingers on the company records that demonstrate who was paid for what we will never know how many were

I read somewhere on the web that one of your claim to fames is having read all 300 Carter Brown books? What’s your take on these books? Was it hard reading all of them?

I have read nearly all of them.  There are a few that I haven’t been able to track down – about a dozen.  And yep, I have read them.  I wonder if there’s a Guinness Book record in that?  I liked the 1950s ones, the later ones had so much sex and sadism that I could barely get through them.  I like a good mystery and too much loving gets in the way. And I noted that sex and humour don’t really mix.  So the lighthearted humour had all but gone.  I also like the cultural implications of the early ones. Stories about Mafia and corrupt police gave way to stories about advertising executives in New York.

I read them chronologically, by and large to track the differences but tend to read them a few at a time. 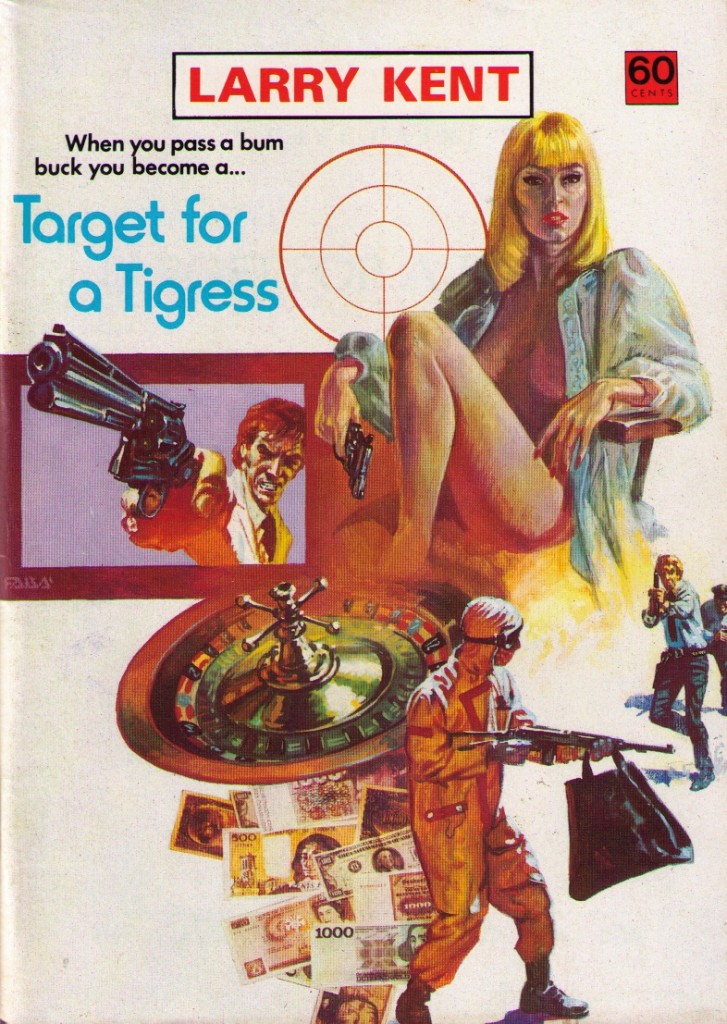 I believe you’re doing a book on Alan G Yates, the man who wrote them. Is that correct? What status is that project at?

Oh don’t ask about the status.  I am stuck on the final chapter. The early ones about the industry, the international uptake and the covers were relatively easy.  But trying to combine all the detectives and plots and cultural shifts did my head in for a while.  I am on the final chapter.  Life and work got in the way and so I plan to finish it this year – as I am now retired I have the time.  The conclusion will be a doozy.  All I want to write is ‘wow wasn’t that fascinating?’.

You’re about to give similar attention to the 800 or so Westerns of Marshall Grover. I don’t know anything about Grover. Who was he and why are you going to read his books?

The westerns will have to be a wait and see project.  I uncovered so much information about westerns in the Scandinavian countries and in Germany that I am not sure I will ever find the time to marshall (like that) my resources and energy.  I have read only about 20 westerns.  So I will pick away at those—so watch this space.  I don’t have the motivation or application that those hundreds of Aussie pulp fiction writers have.  Email can be a savage task-master, hey?

Those wanting to dig further into Toni’s work should check out her book, Pulp: a collector’s book of Australian pulp fiction covers. It is available on-line through New South Books.