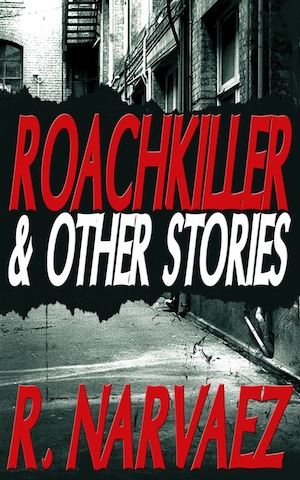 I don’t know what it’s like in the US, but in the Australian publishing scene the words ‘self published’ and ‘e-book’ generate pretty negative reactions, especially when they’re put together.

Roachkiller and Other Stories is both those things  and it’s an incredible read. The book first came to my attention when Eva Dolan, one of Crime Factory’s reviewers, submitted a glowing piece on it for the magazine. Now Eva has a nose for the good stuff, so straight after reading her review I jumped on line bought a copy. I wasn’t disappointed. Roachkiller is kick arse collection of noir short fiction, ranging from hard boiled crime pieces in the vein of Edwin Torres to the blackest dystopian tales.

Your can check out Richie’s site here. You can buy Roachkiller on Amazon here. Seriously, read Richie’s post then by the book. I guarantee you won’t be disappointed either.

About a decade ago, I was like a lot of writers: I talked about writing but I didn’t scribble a single story. Not a sentence, not a dependent clause, not a word. Then at some point I read a notice from Mississippi Review calling for postmodern noir stories. I had no idea what the hell they meant by that, but I was intrigued by the opportunity, and also my girlfriend at the time wanted me to do something with whatever meager talent she perceived in me.

So I decided to write something that seemed postmodern – from what little I understood of it – and that seemed pretty noir. I got the idea from something my father said once, about being able to hire a hit man for a six-pack of beer. I called it “Roachkiller”, and it was about an ex-con who narrated his life in third person.

It was probably more clever than competent – I hadn’t written a crime story since college – but I liked it and sent it in. Then the editor, the inestimable Anthony Neil Smith, duly canned it—but with wonderful generosity. He said I should send “Roachkiller” over to a new magazine called Murdaland because they paid and MR didn’t. And then he added that there was still time to get in a postmodern noir story, if I had another lying around. I, of course, said I did, and then I went about writing one from scratch. Smith took that one, “Unsynchronicity” – about a philosophical yuppie who becomes a pimp, featuring a lot of jumping back and forth in time (postmodern, natch) – and I was ecstatic to get my first fiction byline in years.

Meanwhile, Murdaland looked askance at “Roachkiller”, judging it unworthy. Perhaps, I thought, I should just go back to whiling away my days dashing out unpublishable satirical poetry. But three months later, one of their editors, Cort Mcmeel, a very cool and low-key guy, wrote me back, saying they kept remembering “Roachkiller” and wondering if I’d be open to some edits. I have never been precious about my writing. I know that part of it is a job and that very often a writer is not the best judge of his own work. I said, “Hell yeah.”

Soon, Murdaland’s other editor Sean O’Kane and I were on the phone for hours. Between bouts of declaring our mutual love for the works of Bruce Jay Friedman, we batted back and forth ideas to turn the “Roachkiller” character from someone who was close to superhuman to someone more real and vulnerable.

In this way, my crime fiction writing career was born and began to bloom.

A month of two after that issue of Murdaland was published (sadly, its last), I went to a reading at the Mysterious Bookshop in Manhattan and met the very sweet Liz Martinez. She had read “Roachkiller” and admired it! Along with Sarah Cortez, ex-cop/great poet, she was putting together an anthology called Hit List: The Best of Latino Mysteries. They were kind enough to invite me to contribute. In my mind I thought my inclusion would make the book title hyperbolic, but of course I said, “Yes.” I sent them a story called “In the Kitchen with Johnny Albino”, based loosely on my mother’s experiences as a number runner in the 1970s.

Later, Liz and Sarah edited a volume of Akashic’s unending series of noir books, Indian Country Noir, and invited me. I sent them “Juracán”, a sort of Maltese Falcon Goes to the Tropics.

In time, I wrote much more frequently and sent stories out as much as I could, frequently getting rejected, but also being lucky enough to get accepted into great places such as Plots with Guns, Spinetingler, Yellow Mama, Storyglossia, and Thrilling Detective.

In time, I realized I wanted to—and could—write all those novels I used to just talk about. But, while those books were still cooking in my brains, I thought maybe I could get a collection out. I had over a dozen published short stories, and I thought that altogether might be worth a couple bucks to some readers. Through a mutual friend, I met Bill Harris, from the e-book concern Beyond the Page, over some beers, and I pitched him the idea, and, to my amazement, he liked it. Roachkiller and Other Stories was born, featuring all these stories I’ve mentioned, and including one written just for the collection.

I know I have been very fortunate in my journey to becoming a crime fiction writer. I can offer no advice to anyone trying to be a writer, except a reminder that the best way not to get published is not to write.