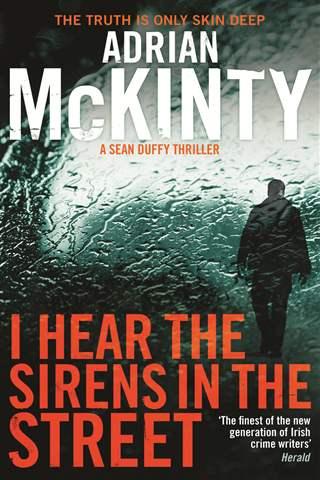 I Hear the Sirens in the Street kicks off the discovery of a body in a suitcase in an abandoned factory. Well, not exactly a body, the torso with the other bits sawn off. It belonged to an American citizen, a former US Marine during WWII. The American was poisoned with a very rare flower, frozen, and then cut up. Looking into the murder, it’s not long before Duffy is rubbing up against bent paramilitaries, an ambitious American carmaker and officials higher up in the police who just want to forget the whole thing.

Two things elevate this book from a solid police procedural thriller to a much more dark, complex and satisfying read.

The first is how McKinty handles the period detail of Ireland during the Troubles. The poverty, bad food and crap weather is just part of it. He paints a nightmare world of sectarian violence, corruption and paranoia. I Hear the Sirens and the first book in the series, The Cold Cold Ground (which I reviewed on this site here) are one of the most vivid depictions of civil strife I can remember reading.

The second is the writing style. McKinty has always had a nice turn of phrase. But his last few books are getting to that space occupied by the likes of Don Winslow and Dennis Lehane, writers who are so on top of their game their books look almost effortless. Sharp, sparse prose, wonderful single sentence descriptions. It gives the self-professed crime writers among us something to aim for.

This entry was posted in Adrian McKinty, Book Reviews, Neo Noir and tagged Adrian Mckinty, Cold Ground, I Hear the Sirens in the Streets, The Cold. Bookmark the permalink.