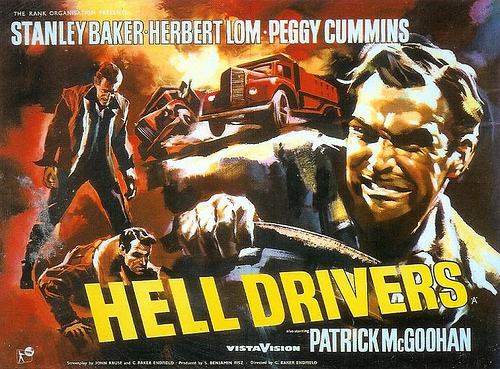 The plot of Hell Drivers is fairly simple. Tom (Stanley Baker) plays a young working class man fresh out of jail following a botched heist that crippled his brother (David McCallum) and left him with a huge burden of guilt. He takes a job at Hawlett Trucking Company. The work involves him driving a ten tonne truck to a gravel pit, loading gravel, and transporting it to a new construction site, as quickly and as many times a day as they can.

He forms a friendship with Gino, an Italian migrant and thus an outsider like him, and catches the eye of the company’s secretary, Lucy. But he almost immediately falls out with Red (Patrick McGoohan), the foreman and “pace setter” (the top driver who sets the pace for the rest of the truckers). Red is a snarling, vicious psychopath, behind the wheel or not. Tom decides to take on Red for the title of the best driver, a duel that has deadly consequences.

It’s a fairly simple premise that Endfield, who started his career in the US but fled to Europe when he fell foul of HUAC, wrings the most out of. The drivers push their battered, mud splattered vehicles to the limit. They are exploited by their corrupt management and its stooge, Red, but can’t seem to get past their own petty rivalries to realise their common interest. Infused throughout the story is England’s bleak post-war drabness, the cold weather, the rain, the shit food and poverty.

Baker makes this film, his strange combination of gentle soft-spokeness and tough guy masculinity. If there was ever a British equivalent of the macho persona of Lee Marvin, he was it. Born in a dirt poor Welsh coal mining village (he was a lifelong friend of that other famous Welsh actor Richard Burton), Baker grew up a self described “wild child”, only interested in football, boxing and drinking.

He got his start with Ealing Studios in the early forties. The Hell Drivers was his break through role. He went onto star in another critically acclaimed Losey film, The Criminal (1960). In 1961, he was offered and knocked back the role of James Bond in Dr No. He went onto start his own production company that birthed, amongst other films, Zulu and the Italian Job. He also branched out into funding rock festivals. Baker’s career suffered with the decline of the British film industry in the late sixties, after which he had to take whatever work he was could get. A lifelong socialist and a heavy smoker, he died of complications from lung cancer in 1976. Other favourite Baker films of mine include Hell Is a City, The Guns of Navarone and the excellent heist film based on the great train robbery, Robbery.

Sharing the screen with Baker in Hell Drivers is a who is who of British acting talent from the time. In addition to McCullum and McGoohan, the band of truckers includes Herbet Lom, a very young Sean Connery, Gordon Jackson and Sid James. William Hartnell (the first Doctor Who) plays the manager of the company and Peggy Cummins (who played opposite John Dall in the classic 1950 noir, Gun Crazy) plays Lucy.

The version of the film I watched was released by Network. It was a double CD and included some great features, including a very amusing interview with Baker.