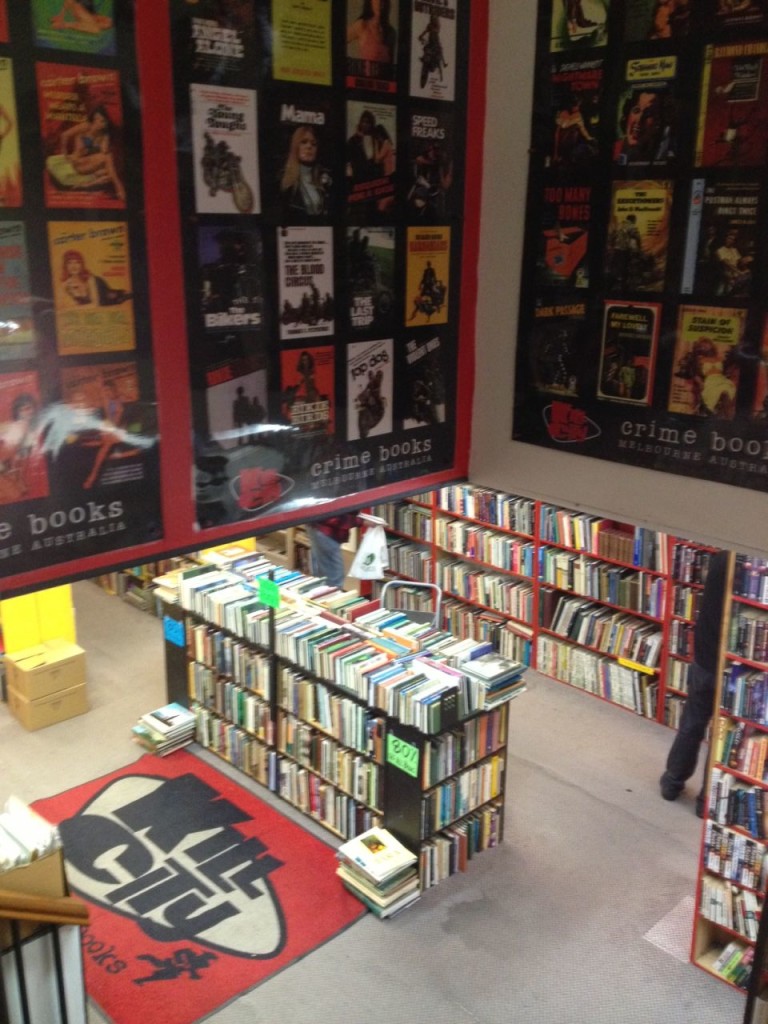 As if the end of a good second-hand bookstore is not sad enough, the passing of Flinders Books has a wider historical significance. For the last eight years of its existence it also hosted the remnants of Kill City Books, once Melbourne’s premier bookshop specialising in crime fiction and true crime.

The owner of Flinders Books was walking past Kill City Books with her father sometime in 2005. The then owner had decided to close the business. They had a coffee with him and ended up striking an agreement to purchase the remaining stock and use the logo.

It may not have been much but it meant Flinders Books always had a good stock of second hand crime, including some great hard to get pulp fiction, and it kept the memory alive.

But I’m getting ahead of myself.

Peter Lawrance and Bruce Milne started Kill City Books in the early nineties. It operated out of a two-storey building in Greville Street, Prahran, waaaay back when Prahran was still a hub of Melbourne counter-culture and the rents were much cheaper.

“Both Bruce and I were reading a lot of crime, we loved it and couldn’t get a lot of what we wanted in Melbourne, so we decided to start the shop,” recalls Lawrance. Around the same time there were two other bookshops that specialised in crime, one in Hawthorn and a place called Black Ink Books in South Yarra. Neither survived the nineties.

Philip Brophy (an experimental musician, film maker and pop culture commentator) designed the iconic Kill City Books logo, which was still on display at the entrance to Flinders Street Books.

It was a heady time for local crime fiction aficionados. The Ned Kelly crime writing awards, or ‘the Neddies’ as they are now affectionately known, had just started (Lawrance is still actively involved behind the scenes) and Kill City Books was a hub for local and international crime fiction names. James Ellroy and Kinky Friedman both did readings in the shop. The first of the Underbelly books written by John Silvester and Andrew Rule was launched on the premises, as were the tomes of many local writers. 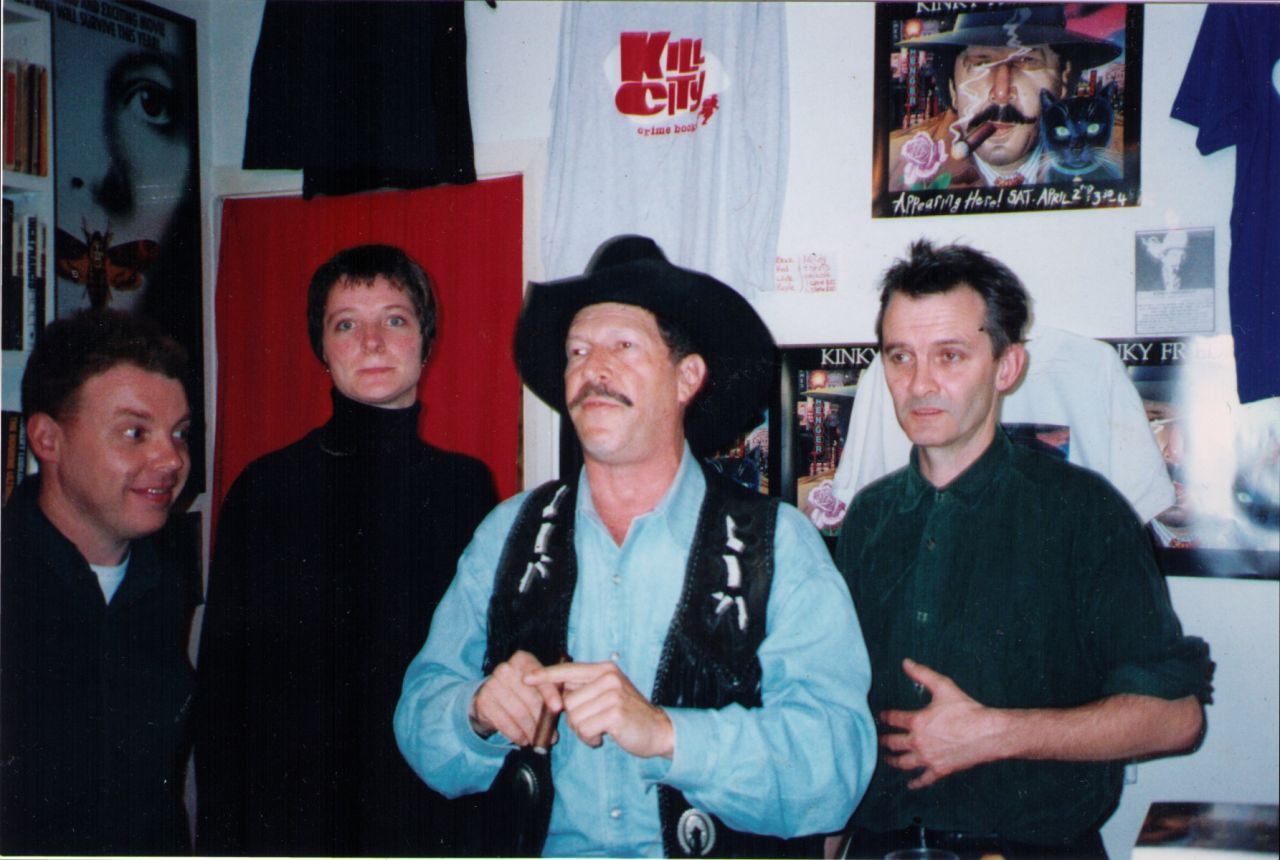 Iggy Pop dropped in. Notorious figures in Melbourne underworld scene would come to buy true crime books and complain about their treatment in the media or in the latest true crime release. Sometimes they would bring their bodyguards. Often they would demand a discount.

“It was that kind of placed,” says Lawrance. “Even though it was in a tiny space it was a destination. The airline magazines listed it as a must see place.”

I frequented the shop during this time. It introduced me to Himes, Bunker, Ellroy and Willeford, amongst others. I remember doing an assignment on Kill City Books as part of a journalism graduate diploma at RMIT in the early nineties. I had to write a feature article and interviewed one of the owners. The assignment scraped through with a bare pass, I suspect largely because the lecturer concerned did not approve of my taste in subject matter.

Making the business profitable was never easy, according to Lawrance, especially after a large Borders store appeared in Chapel Street sometime in early 1999. Deep in debt, Lawrance and Milne sold Kill City Books soon after to a bookseller from the UK named Phillip Bardiger.

Bardiger was a mysterious figure. He had worked in the antiquarian book trade in the UK and owned other bookshops. He had deep pockets. He moved the business to Chapel Street and expanded the range of books available.

David Honeybone started working at Kill City Books just before the business was sold to Bardiger. “I was really into crime and just rocked up there and started talking to Peter [Lawrance]. “Not sure I was looking for a job but ended up working Sundays and Wednesdays when it was taken over.”

He remembers that shoplifting was a major problem, especially in the true crime section. There was also the occasion when a now well-know crime writer walked into the shop and decided to re-arrange the front window display because she felt her books were not prominent enough. 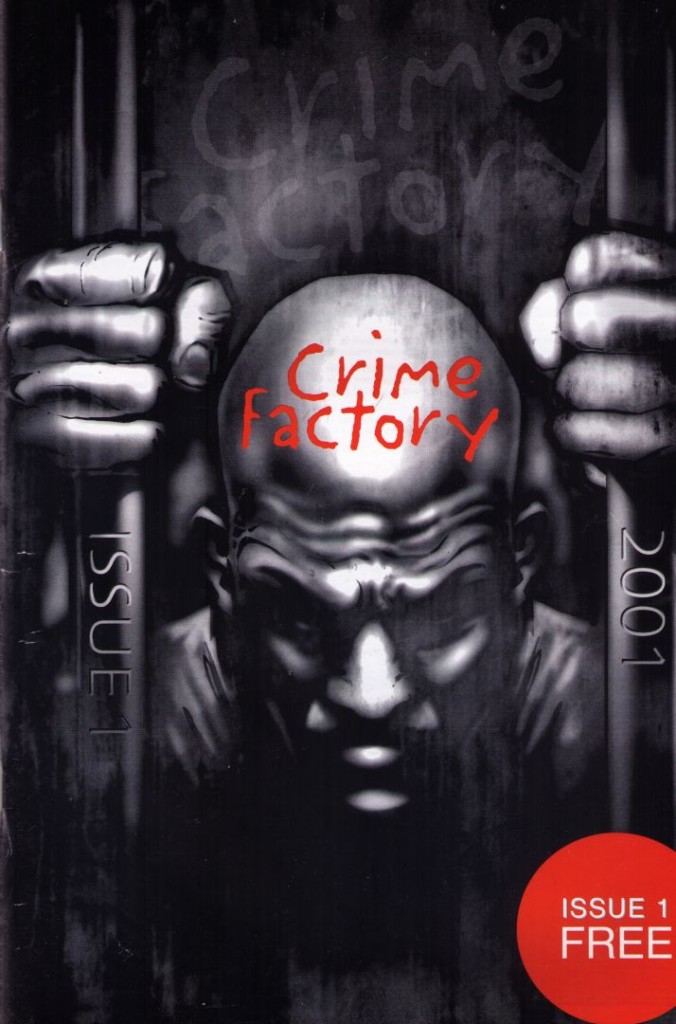 Honeybone was working in Kill City Books in 2001 when he started the hard copy magazine, Crime Factory. Honeybone came up with the name while scanning the shelves one day and noticed the Factory series by British noir author, Derek Raymond.

Crime Factory contained articles, reviews and interviews about all things crime fiction related and was influential far beyond Australia. Nine issues of the magazine appeared before Honeybone called it quits in 2003.

It was also while Honeybone was working in Kill City Books, that he met Cameron Ashley, who along with Liam Jose resuscitated Crime Factory as an on-line journal in January 2010. Thirteen issues of the magazine have so far appeared. Ashley, Jose and myself subsequently started Australia’s sole crime only publisher, Crime Factory Publications.

The owner of Flinders Books hopes to re-open, including the Kill City Books part of the business, “at some point in the future… at some location in the city”.

One can only wish her luck.

If readers have any memories or additional information they’d care to share about Kill City Books please leave a comment, I’d love to hear from you.