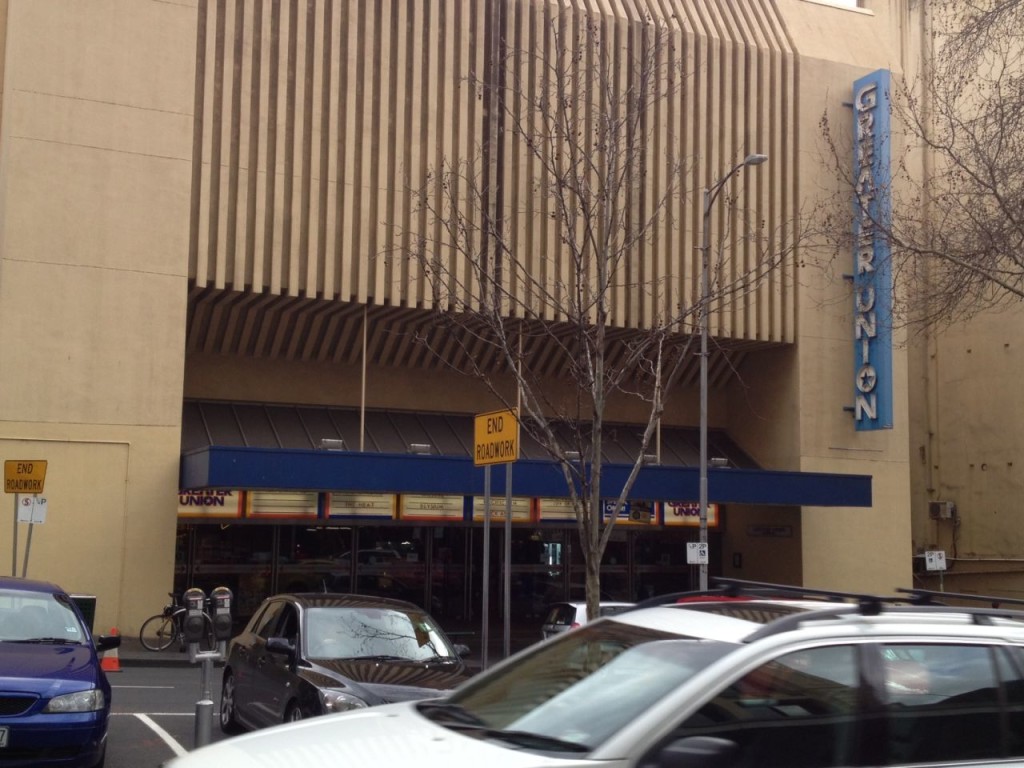 As friend and Melbourne film historian Dean Brandum puts it: “I’ll miss Greater Union but what’s amazing is that it held on so long. It used to be hugely popular. When I saw Can’t Stop the Music there in 1980 the queue stretched down Russell Street, into Bourke Street, all the way to Swanston. We had to stand in line for an hour to get in. ET played there for two years.”

The Greater Union’s demise was just one in a long line of cinema closures in Melbourne. Most recently, the owner of St Kilda’s George Revival Cinema announced it would close its doors.

The introduction of home entertainment in the eighties saw a wave of cinema closures. The gradual expansion of suburban multiplexes, cable TV, and the high cost of digital conversion have reduced the number further.

“Going to the cinema is still a popular pastime,” says Brandum. “But now people want to go somewhere new and with amenities like food and shopping. Most of these establishments are in the suburbs. The exception is to come into town for a specific event, like MIFF.”

I’m not sure what the closure of the Greater Union means for Melbourne’s remaining cinemas or the future of MIFF, which now faces a seating crisis with the demise of its largest venue.

But walking past the shell of the Greater Union a few days ago got me thinking about how much I love cinemas, what my best cinematic experiences have been, how they sometimes had as much to do with what happened before or after the movie as the viewing experience itself.

Here’s my list of my most memorable Melbourne cinema outings, in chronological order:

1. Ben Hur, St Kilda’s Palais Theatre. I went with my mother, I suspect because she wanted to see it and had to take me. With the exception of the chariot race at the end, I was bored senseless.

2.  Moonraker at the now defunct Hoyts Midcity. My parents and I drove in from the suburbs on a school night. It was my first James Bond film and the whole experience was awesome.

3. Mad Max 2 at the long gone East End Cinema 1 in the city. 1981, I wagged school with some mates and went into the city to see the film. It took days for my young male brain to get over the adrenaline-fuelled high of the tanker chase at the end.

4. Raiders of the Lost Ark at the Greater Union. The place was packed and the atmosphere was incredible.

5. The Big Sleep, The Astor Theatre. A friend’s parents took me on a Sunday night in the early nineties. It was my first experience of Bogart and kick started my love of film noir.

6. Anything at the now defunct Carton Movie House. I lived in a student house around the corner and would go to films there not knowing anything about them. It’s almost impossible to do that now. John Duigan’s The Year My Voice Broke was a highlight, as was Scorsese’s underrated comedy, After Hours.

7. Jean-Luc Godard’s Weekend at the State Film Centre now ACMI. I hated the film, but ended up drinking with a bunch of film students until the wee hours, one of whom I went home with. Hey, I said it wasn’t always about the films.

8. The Princes and the Frog at the beautiful Sun Theatre in Yarraville. The first cinema movie my partner and I took our daughter to. She loved it. We loved her loving it.

What are your most memorable cinema experiences?