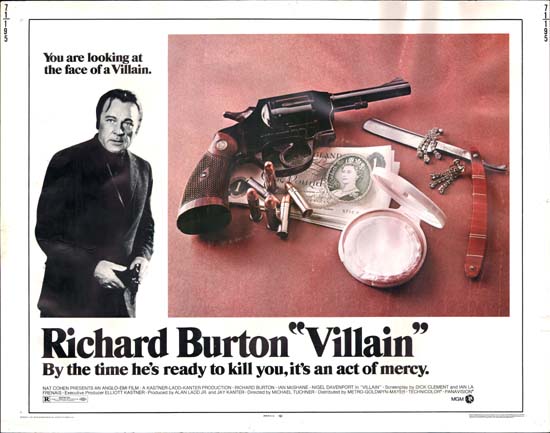 Only recently have I come to discover and appreciate some Burton’s other films. His turn as Alec Leamas in the incredibly bleak and noirish 1965 spy thriller, The Spy Who Came in From the Cold still stands as the best and most realistic screen depiction of the Cold War.

Probably my favourite of his roles is Welsh in the little known Peter Glenville film, The Comedians (1967), based on the Graham Greene book of the same name. Walsh is the louche owner of seedy hotel in Haiti at the height of the terror inflicted on the country by the brutal dictator Papa Doc Duvalier. Walsh desperately wants to sell up but no one will buy. He is stranded in a country going mad.

But I digress. While Villain is by no means Burton’s best work it certainly ranks among his most bizarre and his only overtly crime film, with the possibly exception of The Klansman, the 1974 film he did with Lee Marvin (interestingly, according to his diaries Burton was an avid crime reader, Ngaio Marsh and John D MacDonald amongst his favourite authors).

Burton plays Vic Dakin, a sadistic, gay, working class Tory gangster, loosely based on the notorious British underworld figure Ronnie Cray. You pretty much get a feel for what you are in for in the first ten minutes of the film. Dakin kills a man who owes him money with a straight razor and leaves the body dangling from the balcony of the dead man’s apartment. From there, he rushes home to take his aging mother down to Brighton for a spot of fresh air.

Later, down the pub, Dakin gets tip off from a casino owner he takes protection money from about a potential pay roll job at a plastics factory. Dakin gathers more inside information from a disgruntled middle-aged accountant at the firm. The accountant tells him there’s a limited time frame of four weeks within which to easily pull the job, after which the factory will have taken delivery of an armoured van.

It’s not clear why Dakin wants to do the heist. He certainly doesn’t need the money. Possibly, he wants to recapture the sense of adventure he had first starting out as a criminal. Or he could just be criminally insane.

A strike at the factory means they have to push the job forward. Meanwhile, unbeknownst to Dakin, the police, acting on information supplied to them by the same man who gave Dakin the original tip off, are closing in on him and his organisation.

With his snarling Cockney accent, Burton is almost a parody as Dakin. The only things that makes the performance vaguely believable are Burton’s ravaged, weather beaten looks, the result of a lifetime of drinking, which suit the role.

Villain also boasts an early turn by a beautiful Ian McShane as a sleazy hustler who is also unfortunate object of Dakin’s amorous, brutal desires. Lovers of sixties/seventies cinema will have their worldview severely challenged by the fact that the Scotland Yard Police inspector pursuing Dakin, the moral centre of the story, is played by Nigel Davenport, normally a rogue in films.

And while the plot is fairly standard, a notable exception is the heist. Taking place outside the factory’s gates in front of a group of secretaries, and largely without firearms, it’s one of the most vicious and brilliantly filmed robbery sequences I can remember. This scene alone is worth watching the film for.

Last but not least, a great little fact about Villain, courtesy of IMDB. Burton took a day off filming for his 45th birthday and went with Elizabeth Taylor to collect his recently awarded Commander of the Order of the British Empire medal from Buckingham Palace.

You’ve got to love the seventies.