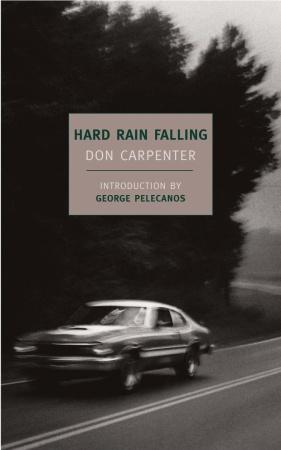 Hard Rain Failing opens in eastern Oregon in 1923, with a liaison between a cowboy and a 16-year-old female runaway. She quickly gets pregnant, is sent to a home for unwed mothers, then goes to live on an Indian reservation, where she eventually commits suicide. The cowboy works as a farmhand, drifts into alcoholism, and is eventually killed in an accident.

Their abandoned son, Jack, the main character of the story, grows up in an orphanage but eventually escapes and comes to Portland, where he runs with a loose gang of wild teens, including the de facto leader, Denny Mellon, and a talented black pool hustler, Billy Lancing.

After breaking into and vandalizing a home whose occupants are away on vacation, Jack is arrested and sent to reform school. His time there includes a hellish stint in solitary confinement, vividly conveyed:

They did not feed him every day, and because of that he had no way of knowing how much time had passed. After a while time ceased to exist. Time stopped in a strange way. First he was aware that there was no present, no such thing as a moment; there was only the movement of his thoughts from past to future, from what had happened to what would happen.

This is followed by a stint in a state mental institution. Upon his release, Jack boxes semi-professionally, does more jail time, and drifts to San Francisco where he reconnects with Mellon, now a full-blown alcoholic. The two men hook up with a couple of young female runaways, and it is not long before Jack again falls afoul of the law, this time ending up in San Quentin. There he becomes a cellmate and, eventually, reluctant lover of Lancing, also doing a stint in prison. The tragic fate of this relationship marks Jack so profoundly that upon his release he attempts to go straight.

The enormous success of Irving Shulman’s 1947 novel, The Amboy Dukes, made the experience and rituals of juvenile rebellion a staple of pulp fiction and more than a few crime novels. Hard Rain Falling contains most of the key tropes shared by these books: meaningless violence; promiscuous, exploitative sex; the intervention of various adult authority figures, well-meaning and not-so-well-meaning; the inevitable trajectory from petty to more serious crime and hard jail time.

What elevates Hard Rain Falling well above the pack of similarly themed stories is the quality of the writing — the prose is clean and sharp — and Carpenter’s storytelling ability. The tone of the novel is unsentimental and matter-of-fact. It plunges us into the harsh, unsparing reality of Jack’s world but also conveys the strong emotional connection between the characters.

Carpenter’s treatment of homosexuality in prison is a case in point, conveying emotion without the sensationalism that often accompanies writing on this subject:

‘One day while Jack was walking past the salad table with a stack of hot clipper racks, he happened to glance over in time to see one man slip a plastic ring on the finger of another man. Both were ordinary men, one a burglar and the other a thief, but the expressions on their faces were ones Jack could never remember having seen on a man: one of them shy and coy, an outrageous burlesque of maiden modesty; the other simpering with equally feminine aggressiveness.’

Little more than a child when we first encounter him, Jack drifts though a harsh post-war landscape of pool halls, flop houses, and greasy spoons, with only his wits and skills as a fighter to rely on. He is a rebel with a keen sense that he is on the losing side of society’s power relationships:

‘Shortly after he had quit working in eastern Oregon, he had gone all over with a partner pulling a short change racket that involved the changing of a twenty-dollar bill for a package of cigarettes; he imagined he had done this enough times to deserve at least a hundred years in prison if he got a year on each count, so he was not feeling particularly innocent, at least in the eyes of the law. As for the true crimes of his life, the crime of being born without parents, the crime of being physically strong and quick, the crime of not having a puritan conscience, the crime of existing in a society in which he and everybody else permitted crime without rising up in outrage: well, he was purely and perfectly guilty here, too, as was everybody else.’

As Pelecanos put it in his forward to the reissued edition of Hard Rain Falling, “Many debut novels boil and sometimes overboil with a voice edging towards manifesto, it’s rare to see one that hits the mark with the assuredness, maturity, and authority of Hard Rain Falling.”

Carpenter was born and spent his early childhood in California before his family moved to Portland. Unable to make a living purely from fiction, he also worked for Hollywood. He wrote the script for the 1973 film, Payday, currently unavailable on DVD, which starred Rip Torn, about a manipulative country and western singer.

He also wrote for television, including for a fascinating sounding show, The Outsider, which starred Darren McGavin (of Night Stalker fame), about an orphaned ex-con loner working as a private investigator in Los Angeles. Twenty-six episodes of The Outsider appeared over 1968-1969.

His Hollywood experience, the workings of which he described as “easily as complex, fascinating and mysterious as ancient Egypt,” became the basis of Friday at Enrico’s, a novel unfinished at the time of his suicide but subsequently completed by Jonathan Lethem and published in 2014, about a group of West Coast writers in the 1950s and 1960s as they navigate the world of Hollywood. The Hollywood Trilogy, a trio of three stories he wrote between 1975 and 1981, about working in the industry, was also published in 2014.

As Pelecanos notes in his forward, Carpenter was a lifelong atheist. One can well imagine Carpenter going to his death in the belief most of his writing, whether his novels or film and television work, would join him in oblivion. If so, he was wrong about Hard Rain Falling.