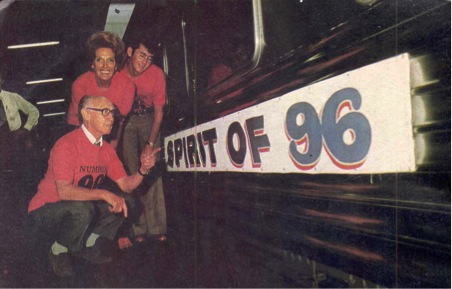 In the 1970s there was one TV show that had the whole country talking. When the adults-only soapie Number 96 debuted on our screens in March 1972 it was hailed as the night Television lost its virginity! This headline proved too much for one newspaper, opting instead for the lesser risqué use of ‘innocence’ over ‘virginity’. Regardless of what was lost, one thing is for certain, Number 96 changed the face of Australian Television.

Based in an inner Sydney apartment block, Number 96 pushed the boundaries from the get-go. Its premiere was preceded by an announcement warning viewers they were about to see something not suitable for all the family. It was time to send the kids to bed. But it wasn’t just the kids who missed out on some rather raunchy scenes. After its initial screening in Sydney, the first episode was subject to cuts ordered by the Broadcasting Control Board. Viewers in Melbourne and the rest of Australia missed out on seeing a man attempting to seduce his heavily pregnant wife and an adultery scene offering a glimpse of bare breasts.

Along with plenty of nudity (not just restricted to the females of the cast) Number 96 offered up a plethora of taboo subjects including homosexuality, abortion, drugs and interracial romance. Whilst the shock, horror aspect might have reeled viewers in to begin with, it was the antics of an amazingly diverse range of characters that kept people watching. Jews, Poms, a couple of gay men, pensioners and young newlyweds were all part of an extraordinary mix sadly lacking in soap operas today. 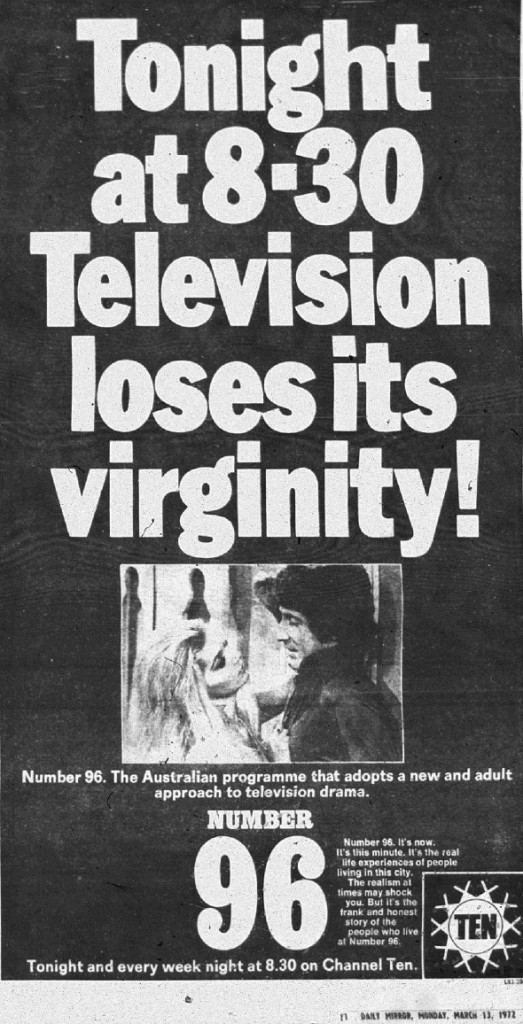 The cast was made up of predominantly unknown actors, but it didn’t take long for them – or the characters they portrayed – to become household names. Everyone remembers Dorrie and Herb Evans, Vera Collins, Arnold Feather, Don Finlayson and, of course, Abigail as Bev Houghton. From schoolyards to well-heeled society, fans – and detractors – eagerly discussed the latest episode, but you have to wonder who was more fanatical. It didn’t take long for church groups to turn up to the TEN studios in Sydney’s North Ryde. They marched around waving placards condemning the series, but adhering to the saying ‘there’s no such thing as bad publicity’, Tom Greer, the show’s astute publicist, called on TEN’s news cameramen to capture it on film. I’ve seen the black & white footage. So did viewers who tuned into the news that night.

Number 96 captured our attention for, well, a number of reasons. The highest rating episode was the night the beloved character Lucy Sutcliffe found out whether or not a lump in her breast was benign (it was). Actress Elisabeth Kirkby, who played Lucy, remembers the impact was so strong it resulted in an increase in women going to their doctors for mammograms. The breast cancer storyline was one of many social issues tackled in the series. Alcoholism was another. Then there was the world’s first portrayal of a transgender character, Robyn Ross played by Les Girls legend Carlotta. Never before had television been so daring.

Of course the cliffhanger element of the show was also a huge draw card. Leave the viewers begging for more. Hard to keep this up five nights a week, but the writers invented some clever and outrageous plot lines. Most notably there was the so-called knicker sniper (who went around cutting holes in the female tenants’ underwear), the pantyhose murders (victims were strangled to death with a pair of pantyhose) and the infamous bomb blast in Aldo and Roma’s ground-floor deli.

When both Aldo and Roma were blown up, along with loveable Les Whittaker and young medical student Miles Cooper in September 1975 there was a huge outcry from devoted fans. They were upset about losing some of their favourite characters and all in the one episode.

Despite all the drama there was a lashing of comedy. In fact the best Number 96 scribes were those such as David Sale, Eleanor Witcombe and Ken Shadie who had cut their teeth writing satire for The Mavis Bramston Show in the ‘1960s. A fine comedy pedigree, but they were able to write good drama too.

Number 96 was the first series to be aired five nights a week in prime time anywhere in the world and despite its adults-only rating a lot of kids managed to see it. Some, like me, were allowed, others had to sneak a look or wait ‘til they stayed with a permissive grandparent. That was part of the reach of Number 96. I’ve heard stories of three generations of viewers sitting down together to watch the show.

It was so popular that when the stars went on the road to promote the show the fans turned up in droves. In Adelaide more fans turned out to see the cast of Number 96 than they had for the Beatles in 1964. When the cast travelled aboard a train dubbed ‘Spirit of 96’ from Sydney to Melbourne for the Logie awards, thousands of fans crowded onto train station platforms to greet them. No wonder every actor in town wanted a gig. Even Frank Thring and Sir Robert Helpmann popped up in cameos.

In 1974, cashing in on all this success, the series spawned a movie. It gave fans a chance to see the characters and sets in colour for the first time and quickly became a box-office smash. Both the TV series and Number 96: the Movie are part of an era captured so brilliantly by Mark Hartley in his Ozploitation doco Not Quite Hollywood.

I was just a kid back then, but Number 96 quickly became my favourite TV show and led to an ongoing love of our local screen culture. Some years ago I started working on a proposed doco of my own about Number 96 to place the whole thing into context; and celebrate a remarkable achievement. I’ve had the pleasure of meeting many of the people who worked on the show and recording their stories that I have since compiled in a book, Spirit of 96: the story behind Cash Harmon’s Number 96. I’ve used an oral history-style of storytelling that has been used to great effect in biographies I’ve read on JD Salinger, Robert Altman and the Australian music scene and it captures the – sometimes conflicting – stories of those involved in such an engaging way you feel part of a conversation. And that conversation includes everything you need to know about the show and what all that fuss was about.