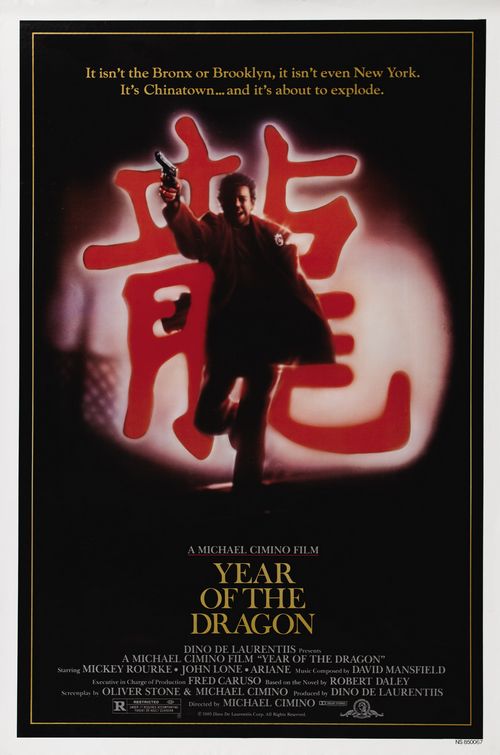 Set in New York’s Chinatown, Year of the Dragon opens with the assassination of one of Chinatown’s elders and the murder of an Italian grocery store owner who resists an attempt to shake him down for protection money. The new head of the Chinatown command of the NYPD, Stanley White (Mickey Rourke) believes both deaths are the result of an upsurge in Triad activity. Both the police hierarchy and the remaining Chinatown elders, including and their young consigliere, Joey Tai (John Lone), dismiss his opinion and seek to pin the deaths on rogue Asian youth gangs.

White is a misanthropic, openly racist Vietnam War veteran who treats the battle against crime in Chinatown as an extension of America’s failed conflict against communism in Southeast Asia. As he tells his commanding officer at one point in the film, the only “… difference was over there I never saw the enemy. Here they are right in front of my eyes.” He ignores official orders only to crack down on the youth gangs and leave the established Chinatown power structure alone, embarking on a wholesale crusade against illegal activity. As part of this, he cultivates a relationship with an ambitious Asian American TV reporter, Tracy Tzu (Ariane Koizumi). He feeds Tzu information in the hope of stirring things up. The relationship quickly becomes sexual, at the expense of White’s long suffering wife, Connie (Caroline Kava).

It soon becomes apparent that the forces behind the trouble in Chinatown are led by Tai who is playing both ends; setting the youth gangs against the Chinatown hierarchy, while advising his Triad elders to break their alliance with the Mafia and go into the heroin importation business on their own. This leads to my favourite part of the film, a visit by Tai to Thailand to wrangle a large drug deal with the notorious Golden Triangle warlord, Ban Sung (obviously based on the then real life Golden Triangle drug lord, Khun Sa), and eliminate a major competitor, the evocatively named ‘White Powder Mao’.

Year of the Dragon did decent box office business but was panned by most critics. In much the same way that The Godfather (1972) was attacked by sections of the Italian American community, Year of the Dragon was criticised by elements of the Asian community in American for its racist language and what many saw as its negative depiction of New York’s Chinatown. While racist epitaphs – a common feature seventies/eighties New York cop films – are thick on the ground in Cimino’s film, there’s also some interesting, if not always well delivered, exposition about the horrific treatment of Chinese in the US, going back to the country’s earliest days.

Pauline Kael summed up a lot of the criticism when she wrote in the New York Times that Year of the Dragon was ‘hysterical rabble rousing pulp, the kind that goes over well with sub literate audiences.’ The elitism of this comment aside, Kael was bang on the money about the pulp antecedence of Year of the Dragon. Right wing, misanthropic, racist cops intent on breaking the rules to get their job done where thick on ground in both crime cinema and popular fiction in the seventies and eighties, and Year of the Dragon feels like a seventies vigilante cop pulp novel come to life.

Fresh from his turn in Stuart Rosenberg’s low life crime tale, The Pope of Greenwich Village (1984), Rourke is serviceable as White, a role variously mooted for Clint Eastwood, Nick Nolte, Jeff Bridges and Paul Newman. Not only is he intensely unlikeable but his character is flat and contains zero nuance. Even factoring in the difficulty of bringing to life an improbably screen romances, Koizumi is terrible. Not surprisingly, her subsequent acting career was short, only four more roles, including a cameo in Ferrara’s King of New York (1990). The sole casting highlight is Lone, who is excellent as Tai and who would go onto do other things, including the starring role in Bertolucci’s The Last Emperor (1987).

The Deer Hunter has been the subject of ongoing critical discussion in relation to its questionable politics around the Vietnam War. The push back against the Vietnam Syndrome, the American public’s reluctance to be drawn into foreign conflicts post the disastrous intervention in Indochina, is fully blown in Year of the Dragon, no doubt due to the cultural climate created by the election Ronald Reagan in 1981, and signs of the conflict are everywhere. Fighting the Triads, White complains to his boss, is like “…Vietnam all over again. Nobody wants to win this thing.” White spends much of the film walking around in his old marine combat jacket. A banner dedicated to American servicemen ‘POW/MIA’ in Vietnam is prominently displayed in White’s local bar.

Weak characterisation and dubious politics aside, Year of the Dragon is not without flashes of Cimino’s creative flair. The movie, on which Cimino negotiated final cut, was filmed on location and looks great. Indeed, aspects of the film’s depiction of Chinatown have an almost pseudo documentary feel; the crowded restaurants, the strategy meetings of Chinese elders, a wonderfully grim scene in an underground tofu factory where Tai has deposited the bodies of two young gang members he has had killed to prevent them from talking.

One can also see clear trace elements of other films. A scene in which White kills a female Triad assassin is reminiscent of Deckard’s slaying of Zhora in Bladerunner (1982). And the pivotal Thailand scene, when Tai enters the warlord’s jungle base and the throng of civilians and military part to let him through, had definite shades of Willard arriving at Colonial Kurtz’s base. And, of course, the whole film riffs of the title of Roman Polansky’s 1974 classic.