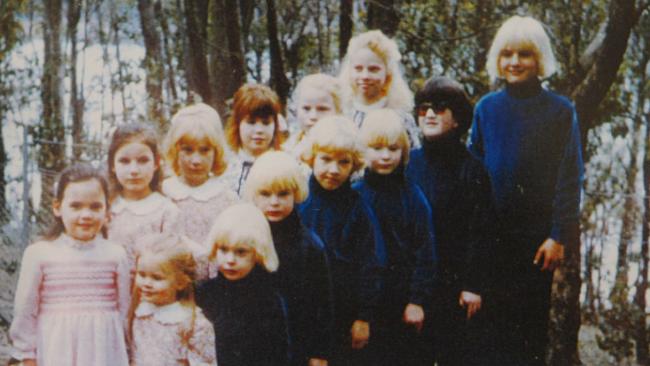 The Family was created by Anne Hamilton-Byrne, a narcissistic, megalomaniac yoga teacher, and Raynor Johnson, a prominent English physicist with an interest in mysticism (and the former master of Melbourne University’s Queens College in the early 1960s). It was one of numerous cults formed in the slip stream of the sixties counter culture and the massive middle class interest in alternative spiritualism, drugs and the occult that accompanied it. The belief system underpinning the Family was a mish-mash of Western and Eastern religions with Hamilton-Byne at the centre as the supposed reincarnation of Christ, come to prepare cult members for the looming apocalypse.

Whether Hamilton-Byrne actually believed this or just played along for power and money is unclear. She has dementia and currently livings in an Eastern suburbs nursing home, so only appearing in the documentary prancing about in rather disturbing home movie footage or denying any wrongdoing to TV news crews (although in the interests of balance, director Rosie Jones does include a member of the Family who, rather unconvincingly, defends their activities).

In all, 28 children took part in the cult. Fourteen of them were raised by Hamilton-Byrne, told they were her children, isolated and taught to mistrust any outside authority. Some of the children were the offspring of members of the Family whose parents willingly gave them up. Others were obtained through forced adoptions or taken from single mothers too poor and isolated to care for them.

The Family works best as an examination of childhood trauma. Several of the children rescued in that 1987 police raid, now adults, feature as talking heads and their stories are genuinely harrowing; tales of starvation, isolation and harsh, unpredictable discipline, including being beaten and administered with drugs, such as LSD. Particularly moving is how they came to grips with their post-the Family lives and grappled with the challenge of not repeating the cycle of abuse when they had children.

The true crime narrative of the film, the official efforts to bring Hamilton-Byrne and her husband to justice, is told by police who were part of the investigation, a painstaking global effort made all the more difficult by the passage of so many years. The documentary strongly infers that the Family was the centre of a much wider conspiracy of prominent middle class people living on the eastern fringes of Melbourne; doctors, lawyers, architects attracted to the Family’s alternative teachings, who used their power and wealth to shield the cult from official investigation and helped them spirit away newborn children. These people included the owner and some of the staff of the now defunct New Haven psychiatric hospital in Kew. A locale straight out of gothic horror movie central, the hospital was used as a recruiting ground for the cult. Those who fell foul of Hamilton-Byrne were confined in New Haven, where some were reportedly administered LSD and electro shock therapy.

Exactly why the documentary stops short of teasing out the full extent of the conspiracy surrounding the Family is not clear. If this huge gap in the story leaves the viewer feeling unsatisfied, as it did me, that’s because it is unsatisfying. Deeply so. Justice was not done. Hamilton-Byne was eventually brought to trial but got off with a fine. To this day, the Family, some 20 to 30 members according to media reports, are still active on the fringes of the Melbourne and there are remnants of in the US and UK.

The Family is playing as part of the Melbourne International Film Festival on August 3 and 11. Details are available at the MIFF site here.