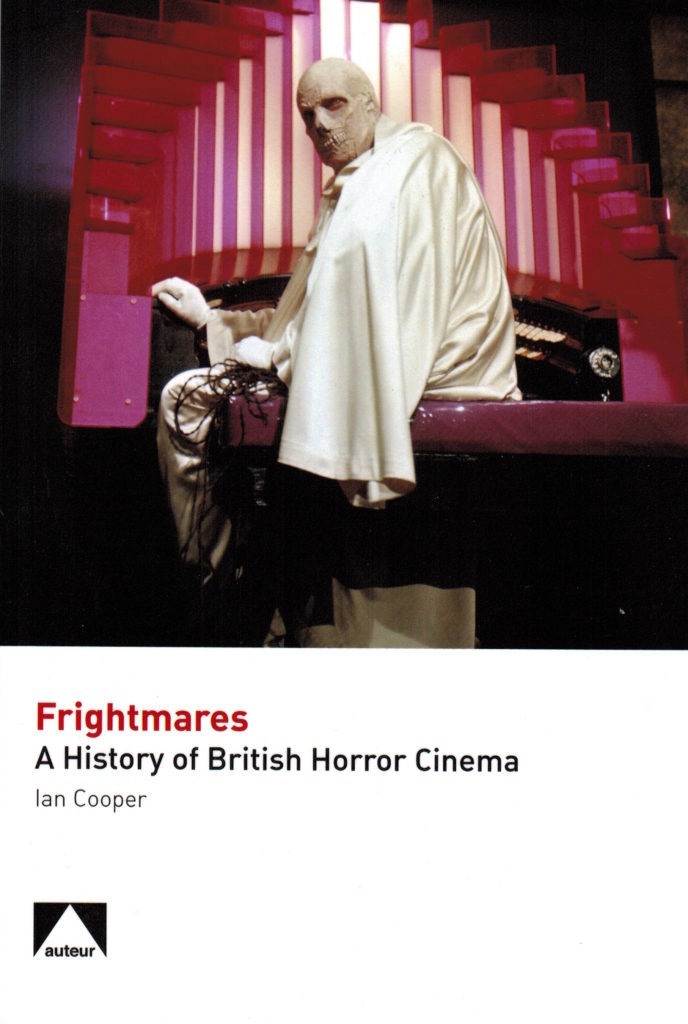 Another great guide is the recently released book, Frightmares: A History of British Horror Cinema, by screenwriter and author, Ian Cooper. There is so much interesting material covered in this book, it’s hard to do it justice in a quick interview.

Cooper takes as his starting point, the argument that the horror genre remains the only staple cinematic myth Britain can claim to be its own. It’s a rich, varied, dark, and, above all, neglected tradition of fantastic, horrific and sensational cinema, which is the product of two ‘seemingly incompatible traditions: a celebrated literary history exemplified in the works of Mary Shelley, Bram Stoker and Robert Louis Stevenson and an abiding lurid fascination with the dark side of life as seen in the end of pier Chamber of Horrors attractions, murder melodramas, Penny Dreadfuls, Jack the Ripper Tours and sensational tabloid newspaper accounts of infamous murders.’

Frightmares combines broad brush overviews of the successive stages of British horror cinema, their themes, influences and production, with an at times almost forensic examination of key films.

After examining the early days of British horror cinema in the thirties and forties, he goes onto to analyse the lean fifties and the rise and fall of Hammer in the latter part of that decade. Despite becoming increasingly lazy and formulaic in the late sixties and early seventies, Hammer’s lasting achievement was ‘a successfully realised fictional universe carried over from film to film, which managed to invent…the hoary old gothic tropes of terrorised women, cruel aristocrats and haunted castles’. Some of the films he looks at in detail are The Mummy (1959), Vampire Circus (1972), the Frankenstein cycle, and Dracula 72AD (1972) – his lack of love for the latter being one of my few quibbles with the book.

Cooper details the influx of enterprising American companies in the 1960s and Hammer’s imitators, Baker and Berman and Amicus, then goes onto traverses the soft sex and hard gore of ‘the savage seventies’ and the so-called video nasties. This period – the most interesting for me as it was the one I knew the least about – ranges far and wide and includes, in my opinion, a successful attempt to ‘reclaim Hitchcock for the British horror tradition, which is where at least a proportion of his output belongs’.

The cornerstone of this argument is a detailed look at Hitchcock’s most sleazy and controversial film (and my favourite aside from his 1958 effort, Vertigo), Frenzy (1972), set in a decidedly down and out London held in the grip of a serial killer whose modus operandi is to murder his victims by strangling them with a necktie. Cooper discusses similar efforts, 10 Rillington Place (1971) and The Offence (1973), before looking at some of the lessor known lights of the British horror exploitation market of the seventies, Pete Walker, Norman J Warren, as well as work of expat directors, Roman Polansky and Spaniard, José Ramón Larraz (whose strange 1974 Vampyres Cooper reviews in detail).

Cooper’s writing style is accessible and engaging. What makes the book a particular joy is the way the author was able to so easily move between sophisticated critical engagement with the subject matter to mucking in and enjoying the genre’s seedier cult aspects and nuances. This is as much evidence of his deep love of the genre as his deep knowledge of it.

Frightmares: A History of British Horror Cinema is available from Amazon here.