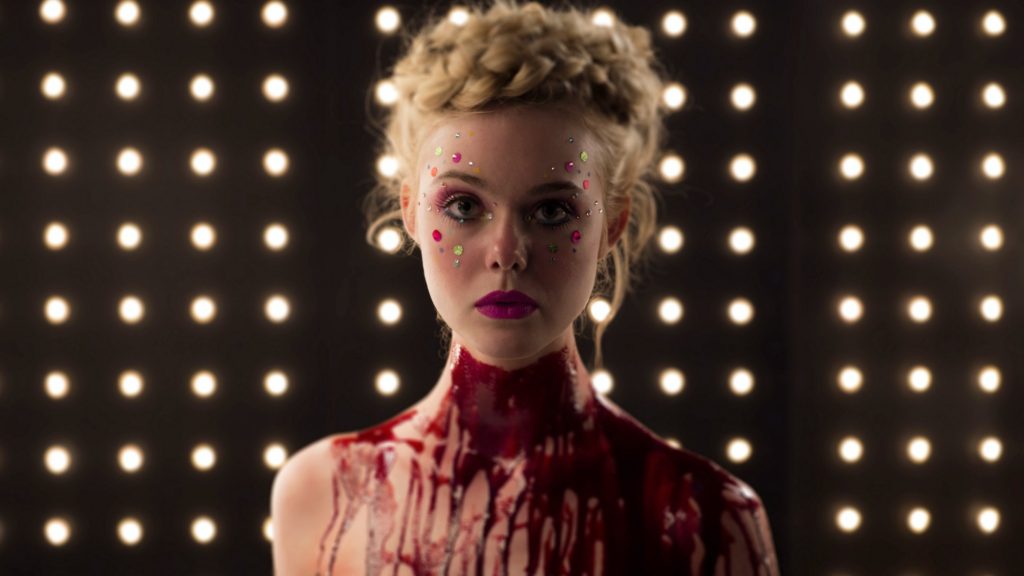 It is not long before Jesse is taking part in fashion shoots and modelling clothes on major catwalk shows, much to the intense chagrin of other models Gigi (Bella Heathcote) and Sarah (Abbey Lee), also out to do what ever it takes to succeed and incredibly jealous of Jesse’s meteoric rise. Gigi and Sarah are also insecure, bitchy, cynical and angry, further alienating them from Jesse, who exudes an air of clam self-confidence and poise. Jesse manages to make one female friend, make up artist, Ruby (Jenna Malone). But Ruby’s sideline preparing corpses at a local mortuary and her fairly obvious – to everyone but Jesse – desire for much more than a platonic friendship, clearly signpost even this relationship is heading for trouble.

A few men are on the scene. There’s a rather gormless wannabe photographer and potential love interest, Dean (Karl Glusman), who it is obvious Jesse is just using until she can move onto someone more lucrative, and Hank (Keanu Reeves), the manager of the flea pit motel she is staying in, who may also be a psychopathic killer. Some may say Reeves is wasted in this part but I firmly believe on the back of playing the sleazy father in Eli Roth’s 2015 film, Knock Knock, he is well on the way to cementing new and lucrative career playing unhinged dirt bags and killers.

Whatever the case, a key observation to make here is that, while the men pull the economic strings behind the scenes of the fashion industry, on a relationship level, in this film, they are largely irrelevant. The Neon Demon is a female ensemble film and say what you want about its depiction of female sexuality and friendship, the most controversial aspects, its passes the Bechdel test with flying colours.

The plot, such as it is, takes some strange tangents, including the suggestion Jesse may have supernatural powers – highlighted at one point by the presence of a particularly strange guest in her hotel room – and the revelation she is not the naive waif she appears, before jumping in a completely shocking and unforeseen direction.

With The Neon Demon, Refn is now in the same territory occupied by Quentin Tarantino; film makers who construct their works almost completely from the wreckage of older cinema, although in Refn’s case this is minus the over the top theatrics and the excessive use of racial and sexual epithets. As attested by Drive, his 2011 homage to 1980s LA crime movies (although its antecedence stretches back to Walter Hill’s excellent 1978 neo noir, The Driver), Refn has been going in this direction for a while now, but with Neon Demon he has gone full tilt.

Much has been made of The Neon Demon’s debt to Dario Argento’s Suspiria (the amazing colour palette and sense of liminal space, with doorways and mirrors separating the division between two worlds). He takes a much wider sampling of giallo, particularly Mario Bava and his 1964 film Blood and Black Lace. Other clear sources include The Eyes of Laura Mars (1978), Lynch’s Mulholland Drive (2001), entire parts of which he appears to have lifted, including the female friendship that is more than a friendship, and Mark Robson’s Valley of the Dolls (1967).

But The Neon Demon shows traces of the fingerprints of a much wider selection of films, including Paul Verhoeven’s 1995 cult classic, Show Girls, the strange 1970 exploitation movie, The Grasshopper (1970), and John Schlesinger’s Day of the Locust (1979), to name but a few. These and countless others have tropes core to The Neon Demon: the destruction of innocence in the face of the exploitative nature of show biz; the fragility, illusion and, ultimately, dark nature of human relationships; the stark duality between the myth of Hollywood (or, in the case of Show Girls, Las Vegas) and the every day lived reality for those seeking get access to a slice of it.

So much of The Neon Demon is artifice and cliché, but so too is the subject matter it deals with, the fashion industry, a strange, mercenary business that exploits youth to sell expensive clothes. It is not at all off topic here to suggest another potential influence on The Neon Demon (although I am certain Refn would not acknowledge or agree), the bizarre hijinks of the UK comedy, Absolutely Fabulous.

Parts of The Neon Demon do not make sense. Some of the characters are under-ultilised, aspects are indulgent and appear designed with the sole purpose of shocking and offending. It is also an intense, surrealistic, sensory cinematic experience and a remarkably effective homage to a remarkable body of past exploitation, horror and thriller cinema.