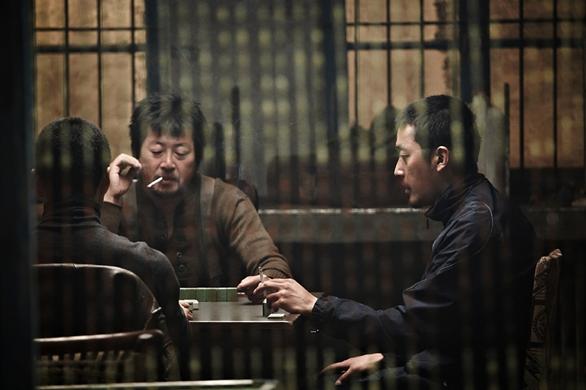 Myun-Ga offers to wipe the debt if Gu-Nam agrees to go to Seoul and kill a man. It’s a chance for Gu-Nam to start again. There’s also the lure of being able to search for his missing wife.

Myun-Ga organises for his newly recruited hit man to be smuggled across the Yellow Sea into South Korea, a truly harrowing journey in the hold of an old tug boat, graphically depicted in a series of short, sharp scenes.

Upon Gu-Nam’s arrival one of the people traffickers bluntly tells him the return boat will leave in ten days. “It won’t wait.” The deadline for his mission established, Gu-Nam travels to Seoul to find his target. All he has is a gun and name and address.

Gu-Nam divides his time casing the apartment block where his target lives and looking for his wife in the back streets of Seoul’s Joseonjok Town, ticking off the days until his departure on an old calendar on the wall of the flop house room he sleeps in.

Just as time is running out and Gu-Nam finally steels himself to kill, someone beats him to it. Gu-Nam is now a fugitive. The South Korean police want him for the murder. The local mob boss, who hired him via Myun-Ga, wants him dead because Gu-Nam witnessed the murder and might lead the police to him.

The Yellow Sea was written and directed by Hong-Jin Na, a rising star of South Korean cinema who also directed The Chaser in 2008, about a dirty cop turned pimp who has to hunt down a serial killer responsible for murdering his girls.

Ramping up the violence, the characters only use knives, there’s hardly a gun in sight, despite the fact that we are in high-tech South Korea. It’s as though Hong-Jin Na wants to take us back to a primeval time when people settled scores with whatever weapons they had at their disposal.

For the most part it works, but the film is far too long and the ever-escalating conflict gradually shifts from being suspenseful to disjointed and slightly laboured. Throw in Gu-Nam’s almost dream like pursuit of his dead wife, who may or may not have been murdered, and it ends in confusion.