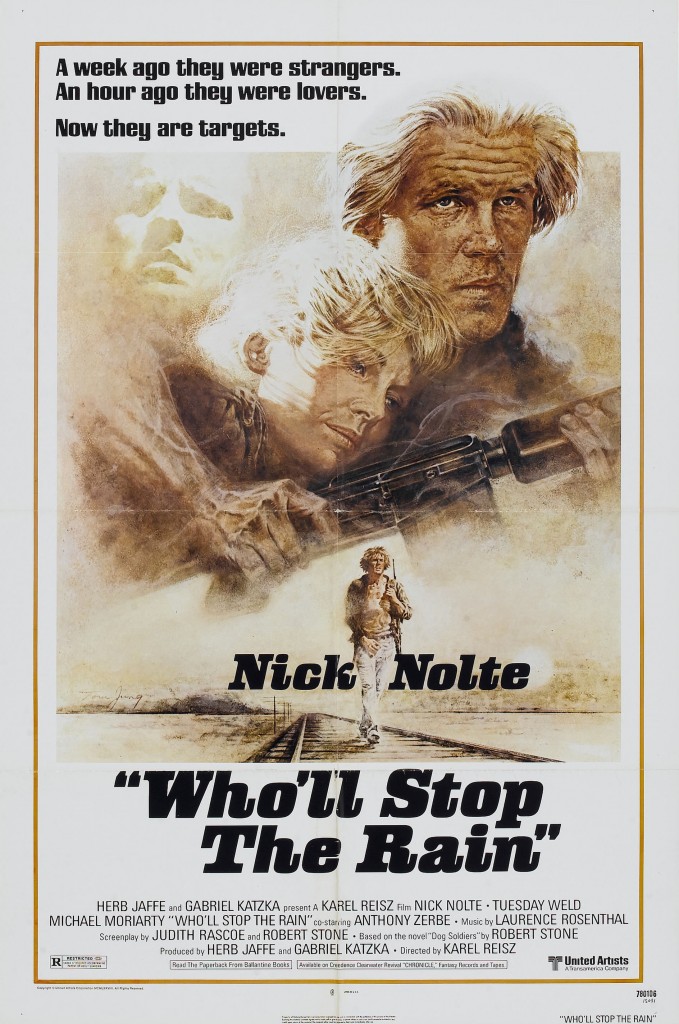 A former liberal disgusted by the war, Converse decides to buy two kilos of uncut heroin in Saigon and smuggle it back to California, where he plans to sell it at an enormous profit.

Hicks successfully smuggles the drugs into the States and visits Marge, who unbeknownst to both men has developed a serious prescription pill habit in an attempt to counter the loneliness and despair she feels at being separated from her husband.

Although Hicks has written to his wife to tell her about Converse’s visit, she’s shocked when she realises exactly what is happening.

“He must have really flipped over there,” she says.

“He’s not the only one,” replies Converse.

Unfortunately, all three of them are painfully unaware of just how many toes they have tread on by deciding to set themselves up in the drug trafficking business.

Converse and Marge narrowly escape capture by a couple criminal psychopaths led by Antheil, a bent drug enforcement agent, a great turn by Anthony Zerbe (Matthias, the head mutant in the 1971 version of The Omega Man).

When John returns home expecting to pick up the drugs, he’s captured by Antheil, tortured and taken along by the crooked cops as they pursue the Converse, Marge and the drugs.

Who’ll Stop the Rain reeks of paranoia and corruption. The government, in the form of Antheil, is as corrupt as the criminals. Converse is an archetypal noir anti-hero, who jumps with abandon into the mess he has created. “I’ve been waiting my whole life to screw up this badly,” is the only justification he gives for his actions.

As Hicks, Nolte is a sort of buff Travis Bickle. “All my life, I’ve been taking shit from inferior people. No More.” He’ll do anything to evade capture, including giving Marge, his pill-popping companion, heroin, to keep her going

As he and Marge flee they come across remnants of America’s decaying counter-culture, bent film execs and middle class swingers who do drug deals over a glass of chablis and sitar music. Eventually they end up in an abandoned hippie commune in New Mexico, where the final confrontation takes place.

Who’ll Stop the Rain is adapted from Robert Stone’s wonderful 1974 book, Dog Soldiers. Stone doesn’t often get the plaudits he deserves for being one of America’s best noir writers. If you are in any doubt about just how good his work is, check out Hall of Mirrors, the 1967 book on which the movie WUSA, with Paul Newman, was based.

WUSA numbers among that great batch of noir/neo noir films made in the seventies, when the Hollywood studio system was in crisis and desperate to give anything a try.

Who’ll Stop the Rain is another. I don’t know why more people don’t know about this film. It’s terrific.