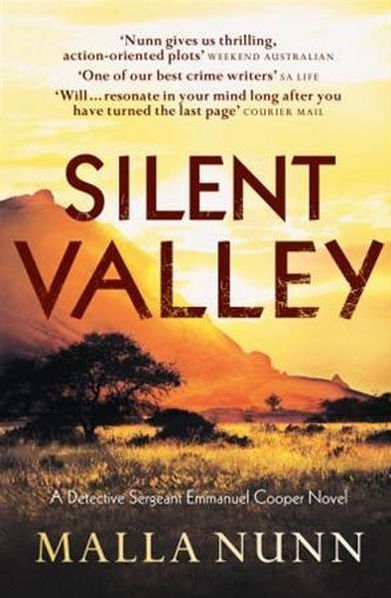 Silent Valley sees Cooper back in the force and in familiar territory, investigating the murder of a young girl – the bride to be of a powerful, overbearing Zulu chief, in a remote part of South Africa. There’s a truckload of suspects, everyone from the head of the local police to members of the white family she worked for as a domestic, with a bit of black magic and sexual deviancy thrown into the mix for good measure.

Luckily for Cooper, he’s got his posse from the first book to help him solve the crime, his police patron, the malevolent Colonel Niekerk; Zweigman, an old Jewish doctor and holocaust survivor; and most importantly Shabalala, his native police offsider.

Silent Valley is a police procedural, albeit a far superior one to many of its counterparts in terms of the writing and sense of place. Nunn’s take on race politics is finely observed and pitch-perfect. She brilliantly depicts how Apartheid mutated relations between the various ethnic groups, including how whites are emotionally and psychologically hollowed out by the system they preside over.

Although he occasionally comes across as bit too good to be true for the time of history he occupies, Cooper’s a great delivery vehicle for this content. Half British, half Afrikaner, he is still recovering from a broken marriage and the carnage of the Second World War. His ability to take an outsider’s view continually conflicts with his job as a white policeman and the power this gives him.

For the most part Nunn’s able to pack all this nuance and detail into the story in the way that does not interfere with Cooper’s investigation. I wanted to get to the end and find out what happens.

That said, I thought Silent Valley suffered from the same problem as A Beautiful Place to Die. It’s too long. At least fifty pages could have been shorn from this novel without it losing any of its narrative power and suspense.